So when I select the component, the blue bounding box is nice and compact. 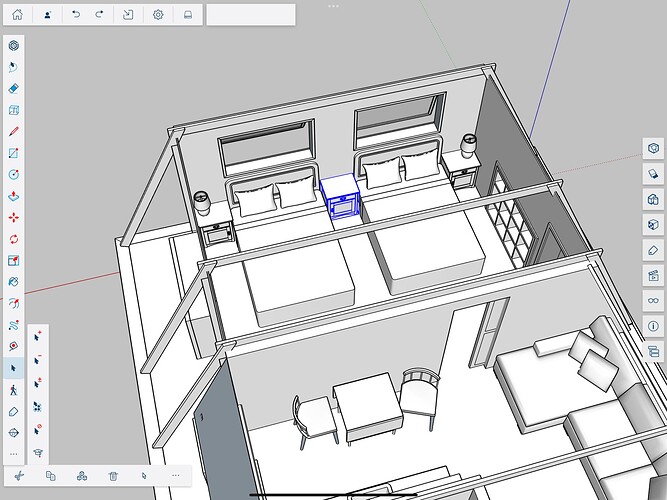 When I open it for editing (rest of model automatically hidden) the bounding box is crazy long and wide. I thought there was hidden stuff in there, but if there is I don’t know how to find it. If I select a different instance, the box Is different, but still crazy.

What’s happening, and what does it mean? How do I read the user interface? What is it telling me?

Is it tall because they’re up high in the model? 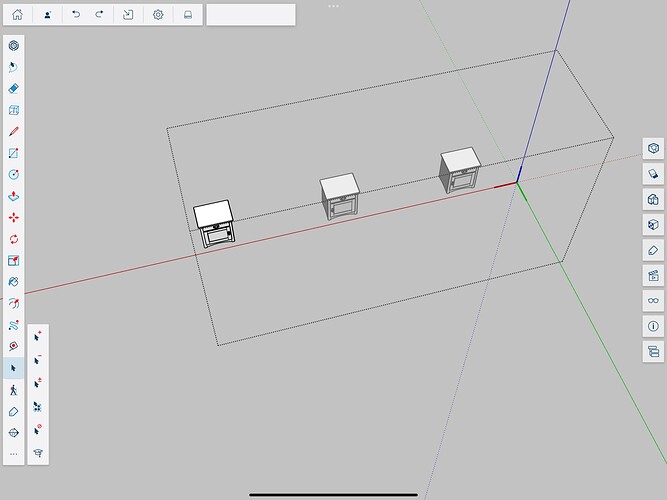 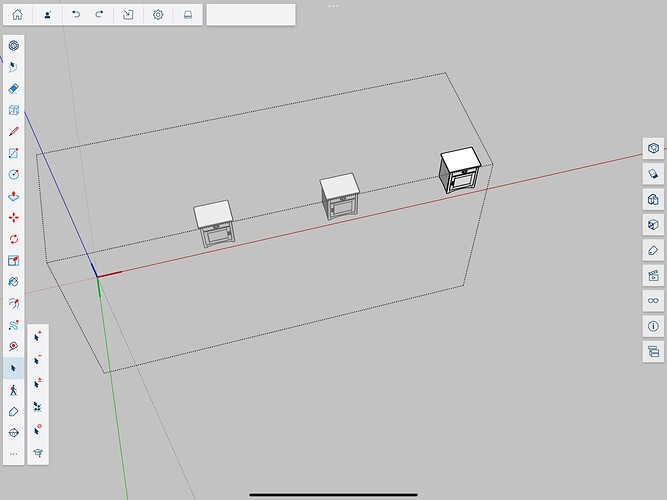 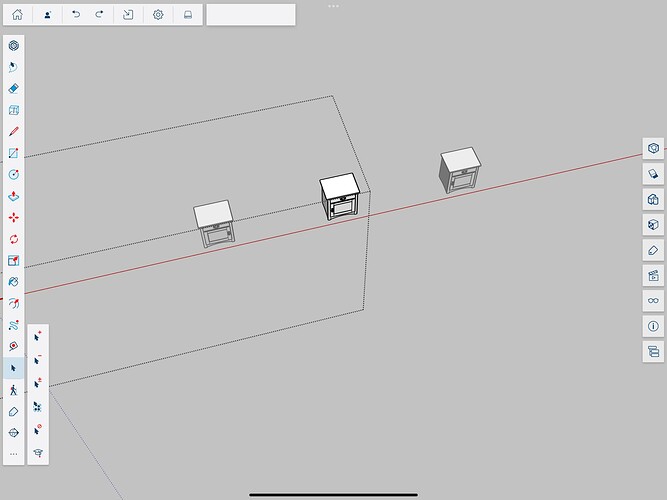 Component is from the warehouse. I have edited it.
Houle - Breakout.skp (6.4 MB)

Reposition the axes, bring them closer to the model.

@mihai.s s right. The problem comes from component axes that are placed too far from the contents of the component. The issue is compounded a bit by a seemingly unnecessary level of nesting in the end tables…

The problem appears on iPad because it wants to show the component axes when you open for edit. If there is a way to toggle this (as there is on the desktop) I haven’t found it.

It’s one of the things that you should be aware of when using warehouse models, one of the things to ‘Clean up’.
Something to keep in mind, if you open a component file directly it should open as raw geometry (or at least one level deep) and be sited on or close to the model origin. The model origin will be the insertion point of the component in any model it is brought into. So if it is off to the side or way below the geometry you know there is something wrong.

I didn’t even think to look for components inside of components… I tried resetting the axes, but didn’t get the hang of it. I was having the iPad crashing every 30 seconds issue so I am working out of a beta version so that I can keep things moving, and it isn’t without its own glitches. I will try again when the crashing stops.

I did pull everything on this nightstand apart and explode them, then regroup them before making them into one component.

Is that the proper way? Groups on the inner level and then a larger component container? 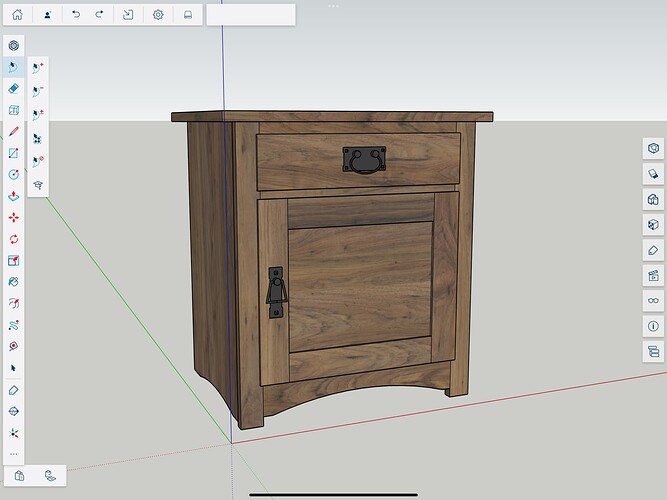 The right answer depends on what purpose they serve in the model. If they are just for entourage, a simple component wrapping edges and faces is probably enough. If they will actually be built from plans developed from the model then it would be right to model each distinct part as a component and nest them all in a wrapper component. Remember that you can copy and flip component instances to handle things such as right vs left sides, etc., without making them different components.

This is where it can get confusing.
A component is a sketchup model, when you open that model on your computer you shouldn’t see the wrapper of the component. If you do then when you drag it into a model from the component browser it will be double wrapped.

A simple example. A cube component within a model should read as a component, but if that same component is opened from windows explorer, or mac equivalent, it should just be raw geometry.

So in the case of the night stand, that is double wrapped because it is already a component within it’s own component model.

So then another dumb question:

I work almost exclusively on iPad, and I’ve been uploading some of my components into my 3D Warehouse, mostly for my own repetitive “need a sink” moments… I have been saving a model of them as what I consider to be a “clean” version already wrapped in a component shell. You’re saying I should leave these components unwrapped before uploading them?

On that note, because there’s no component storage on the iPad (right?) Am I doing myself a disservice? Are my reusable components coming into my design models double wrapped?

Edit: yes. Yes they are coming in double-wrapped.

Yep. They are indeed.

It’s actually most obvious with dynamic components, if you do it wrong they don’t work.

The issue of the strange bounding box is easily explained when you look at what we have been talking about.
Imagine you create a nice component in an empty model space, the component axes is set to the default bottom left corner of the object and the bounding box is nice and tight around the object. But you built this component at some distance from the model axes/origin. Perhaps it is 10 feet to the right and 4 feet back and hovering 1 inch up. But this shouldn’t matter should it as the component axes have been set correctly and the bounding box is tight!
Now I save this using file save and call it the name of the component. Done all good.
But when I bring this into an existing model the component will be 10 feet right, 4 feet deep and 1 inch up from the cursor and when you go to edit it the open bounding box will be of a similar size.
But if you explode it once it will be the component you want with the tight bounding box.
This is all confusing enough when you learn it using the desktop version, but throw in the ipad permutations and it can be very difficult to follow. Although it is simple.

This is all confusing enough when you learn it using the desktop version, but throw in the ipad permutations and it can be very difficult to follow. Although it is simple.

Add in geolocation…
(one additional reason to check Warehouse items, quite many are geolocated!)

The idea of using already drawn elements as components is described in the patent:

‘Save as’ or ‘Storing the component in a persistent storage repository seperate from the model’ should be in the Web version as well, btw.

A three-dimensional design and modeling environment allows users to draw the outlines, or perimeters, of objects in a two-dimensional manner, similar to pencil and paper, already familiar to them. The two-dimensional, planar faces created by a...

It makes perfect sense once you explain it. I will be compulsively cleaning components… probably reupload all mine in the warehouse. Usually I just copy paste from my master model here on iPad because of internet issues, but I would like to learn the proper way to do it.

In any case, I dunno if there will ever be component storage on the iPad, but if there is then that is yet another reason to do it more efficiently now for later ease.

I think the main reason that the extreme bounding box while editing was irritating me was the inability to easily click outside to close the edit mode. I had to go into the select menu or zoom extent out.

Thank you, all of you

This has been extremely helpful.

Okay, here’s one of mine. A drop leaf table from IKEA, no need for breakout construction pieces. Am I doing it Right? I have everything grouped… but… would it be more efficient to only have the drop leaves be separate groups so they could be raised?

You have used groups in many places where I would use components. There are parts that are identical and one would expect editing one to affect the duplicates the same way. That won’t happen with groups. In the specific case of the wings, using a component would allow you to make instances in both the folded and raised positions and use tags to control which are visible.

To clarify what I wrote earlier, if this table is purely for decoration (entourage), I would eliminate all except the visible outer surfaces and edges of all the parts except the wings and optionally explode all those groups (exploding the reduced versions will have only a small effect on model size and performance because all the faces and edges need to be shown in any case). Then wrap all that geometry as a group.

Next, make a single component for a wing and place instances of it in the appropriate raised and lowered positions. Apply different tags to raised vs lowered to control which are displayed.

You could wrap a component around the stripped down table and the wings to let you manage them as a single object, e.g. to place multiple instances around the model. But bear in mind the potential for “double wrapping” depending on how you save and use the model, as discussed in earlier posts.