Drawing An Armrest With a Volute?

I’m trying to copy what I see being done in the video by DaveR. 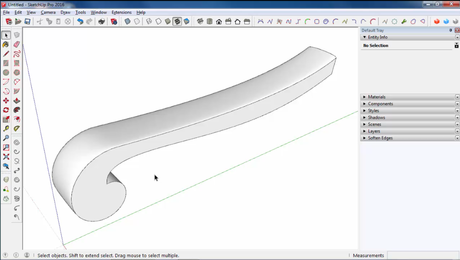 Drawing An Armrest With a Volute - FineWoodworking

Recently I was having a discussion with another SketchUp user about drawing volutes like you would find on the tops of some classical columns. While showing him a way to draw those, it occurred to me...

I’m not getting very far without running into problems.
I can’t seem to adjust the segments as shown. As you can see the segments window shows 20 and is faded out.

What I’m I doing wrong that I can’t adjust the segments?

What I’m I doing wrong that I can’t adjust the segments?

Your selection in the end shows a curve consisting of two arcs (or whatever), not just one arc.
You can only adjust/change the segment count of arcs or circles, not composed curves.
Try splitting the curve at the right spot with a dummy edge drawn to that spot, then selecting only the arc.

Edit: just to be clear I mean type 60s and hit enter, without trying to get into the segment box.

Try splitting the curve at the right spot with a dummy edge drawn to that spot, then selecting only the arc.

That may do the trick, but I don’t see Dave mention anything about doing it that way in his video. I must be missing something so maybe that’s it.

just to be clear I mean type 60s and hit enter, without trying to get into the segment box.

Yeah, was trying that before I posted. Just don’t seem to work. I know that is how I enter a lot of other info well making models, but nothing happen when I type to change it.

I have to ask, did you read my post?

I don’t know why it would not work in my first attempt but I decided to do File>New and start over fresh. Works like I would expect it to now.

Guess when I’m playing around and just trying different things it maybe be best to start with File>New instead of select all and delete.

I don’t know what to tell you as that gif above is on your model.

I’m sure it was some kind of operator error.
Maybe someday I will run across the problem again and then be able to figure out what I was doing wrong. As for now starting over worked.

One finished armrest ready for grading.

and now it’s a nice solid like I thought it was the first time haha.

Not bad at all. Good work.