Deeper Understanding of CPU and Comparisons

I understand that SketchUp is using only single thread of the CPU, therefore most important thing to consider is clock speed , right? (or Processor Base Frequency with Intel’s terms)

If so, how can we clarify this comparison? (check Single Thread Rating) 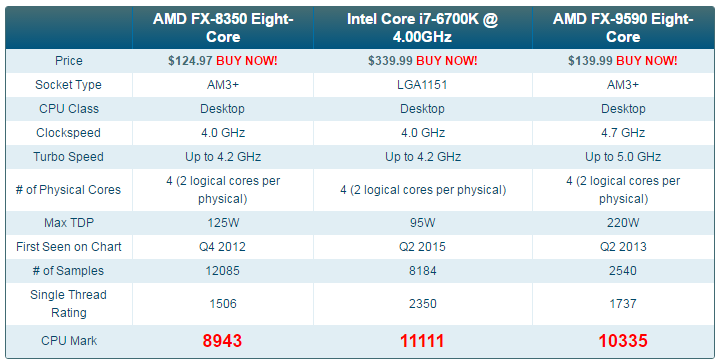 718×364 23.3 KB
How on earth Intel processor beats both AMD significantly (Especially FX-9590) !? I believe there is a missing information in this brief chart that makes the difference. Or is this chart not reliable for some reason?

clock speed is of course not the only attribute of a processor but e.g. the instructions per second is important too (based on e.g. the amount of transistors and how efficiently designed as well as memory connexion), more info here.

As you can see from the material @sketch3d_de referenced, CPU design is very complex and technical, with tradeoffs among a lot of factors. This makes comparisons likewise complex, technical, and multi-factor. As a very crude rule of thumb, newer and more expensive will perform better at the same clock speed because the designers could take advantage of advancing technology and could also make tradeoffs that increase the cost.

Simple figure-of-merit tests such as shown in the chart are biased based on the specific mix of operations included in the test and the way the score was calculated. Will SketchUp also benefit from techniques that improved performance in these tests? Almost certainly! At the same ratio as shown by the tests? Impossible to know without actually exercising SketchUp, because its mix of operations may be quite different.

Is there some sort of benchmark SketchUp file?
A standard file which you can download and an extension to measure performance. You could then build a database to compare your own results

Is there some sort of benchmark SketchUp file?

Not that I know of. And, of course, being a single test file it would be subject to the same sort of bias as the other tests due to its single, fixed mix of elements. It’s not a question with a simple answer!

I see the CPU speed is being pushed again, what is noted may very well be overclocked and if you look at a block diagram the CPU is not the only important item. In fact many of the PCs you see listed are not built by them Skylake systems supported on Windows 7 and Windows 8.1.
I have understood the limit on CPU speed is in the range of abt 3.5GHZ; the use of the 3 volt form them is based on thermal consideration. The devices do not operate on or off but go through a linear region and higher dissipation.
I would not be making a buy decision based just the test you noted but the total system and SKU version of the model and would never by a overclocked system, but tha is my bias.

by doing screen transformations (orbit/zoom/pan) of several complex models in different view modes (wireframe/HLR/shaded) and measuring the time required for doing this either integrated or as an extension. < update >And optional an upload of the result in connection w/ some specs (CPU/GPU incl. driver revision/RAM) to a public viewable comparison table.< /update >

Thanx, are there any developers out there😄

Thanks guys for the responses.

I researched a bit more and found out that energy consumption was more important than i thought. Also here is an info how Passmark calculates CPU Test information.

On the other hand i’m still not quite satisfied, check these other websites for comparisons: cpuboss , cpu-world . FX-9590 clearly has more speed, core, cache (Only lacking memory bandwidth, consuming more energy, older etc.) and still got beaten on all benchmark performances. Am i missing something here?

Besides if i’m not going to take ‘numbers/quantities’ into consideration, why should i benchmark results?

[quote=“filibis, post:9, topic:45310”]…and still got beaten on all benchmark performances. Am i missing something here?
[/quote]

depends on the better internal processor structure of the intel Core series.

additionally with the upcoming 10-core i9 @ 4,5 GHz the performance spread will get bigger.

I’m really not a hardware expert but I’m thinking multiple cores can be a good thing even if SU itself is single threaded. You often have a web browser, maybe a media player and a whole bunch of system background processes that can use the other cores. Right?

additionally with the upcoming 10-core i9 @ 4,5 GHz the performance spread will get bigger.

Some more fresh news, i just came across to this website where they put all slides (from the announcement, i guess). Socket type for motherboards also seems changed (another reason to buy newer for future replacements?)

I’m really not a hardware expert but I’m thinking multiple cores can be a good thing even if SU itself is single threaded. You often have a web browser, maybe a media player and a whole bunch of system background processes that can use the other cores. Right?

For sure, no doubt on this. I believe it’s a matter of choice depending on your usage type (modelling, gaming, rendering, ‘science’ etc…). That might explain the reason of good amount of variations between clock speeds and core/thread counts (and price for target audience

If one wants to try optimizing core usage, some tweaking can be done through the Windows Task Manager regarding core priority and affinity useage. 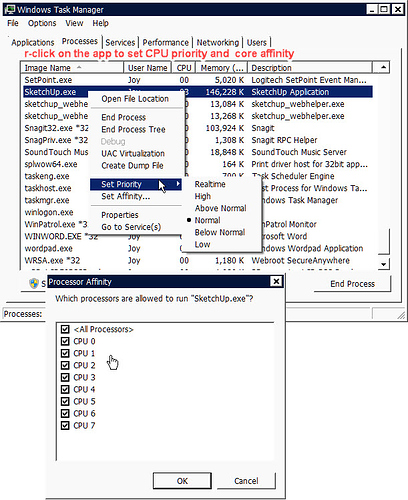 On could set SU to use one specific core and dispatch other resource-hogging apps to other cores (Win 7.)

or the advanced ‘Process Explorer’ from the free Microsoft Sysinteral tools… some other nice stuff too.

I’ve gone through most of the intel Xtreme editions. (currently on a 6950x and its FAST for sketchup), and every new Gen CPU seems faster than the last - it’s also a combo of memory speed and other system upgrades that each generation brings.

You cant compare CPUs on base specs like power comsumptuion. It’s like saying 2 cars each have 4 cylinders, acheive similar fuel economy, both engines rev to 6500 rpm and have 5 gears, four wheels and 2 seats - but one gets you there much faster.

What do you think about these new AMD Threadrippers that will be released soon? And how you find it comparing to i9-7900x? (I think they’re same price)
There’s already a Vray benchmark result for TR 1950x (maybe from ChaosGroup team?) And looks better than i9 result.

Also how do you compare Threadripper 1900X to Ryzen 1800x? (They look very similar, only slight clock speed difference) In the article it is mentioned that TR 1900x will use X399 motherboards, what might be the actual benefit for it? As mentioned here, ‘64 PCIe lanes’ sounds like good deal or is it just overkill? (How many GPUs can it hold?)