If you mitre cut a piece of wood, at say 45 degrees, you end up with two bits of wood each with a 45 degree angle. How do you achieve the same thing using SketchUp Make? I can get the angle using the protractor and Push/Pull, but that effectively removes the second piece.

I’m new to this and don’t know the terminology to get any successful Google searches. The white cube in the following image is the effect I’m looking to achieve: 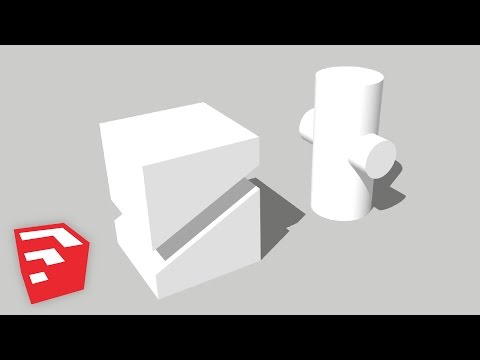 Instead of drawing one edge across at 45 degrees, draw two edges parallel to each other but also at 45 degrees to vertical or horizontal. Now push the face in the middle to rhe other side, making it disappear.

Thanks Wo3Dan. I managed to get it working as you suggested.

I also managed to use another shape for the cutting by selecting “Intersect Faces > With Model”. It seemed to produce the same result. Are there any pros/cons to either technique?

No, given that both results have the same geometry left.
And which one to use depends on the situation your model is in. Which one suits best and/or fits better in your work flow. It really doesn’t matter. The goal is important.

You can’t always use push/pull and wth intersect you may end up with curved end-surfaces that you need to stitch (triangulate) to close the object. Push/pull can only create flat cuts.

You need to know both techniques.