In curving a straight set of stairs with Shape Bender I am having trouble getting the stairs on the new curved line to face the right direction and be on the proper side of the new curved line. I found a video that suggests you use the arrow keys to move or direct the new stairs but still unable to move them in the desired spot. Any advice on this would be helpful.

Share the SketchUp file so we can see what you’re working with.

I forgot to mention that the straight stairs i show in the sketchup file are just a temp trial set.

So which of the two curves are you wanting to bend to? There are two overlapping ones. I’ve separated them here.

Next,do you want the stairs to follow around the outside of the curve or the inside? Whichever one you want there will be some distortion because the straight run of stairs is not the same length as the curves.

There’s also an excessive number of sides in your curves. No need for such high numbers. 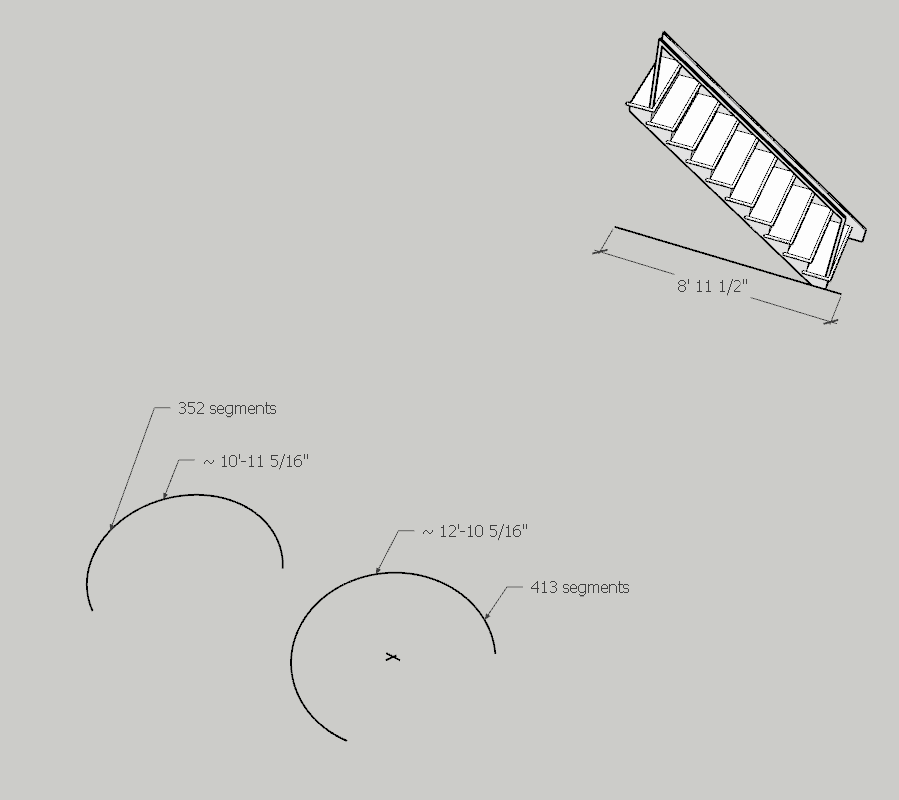 The 413 segments. This is not the actual stairs i will using. I just want to make sure that this will work before I model the final stairs.

So start with many fewer segments in the curve. There’s no benefit to such huge numbers in the curves. Generally a max of 96 for 360° is plenty. Even with 24 segments the stairs should look fine but there’s so much geometry in them it’ll take some time to process. 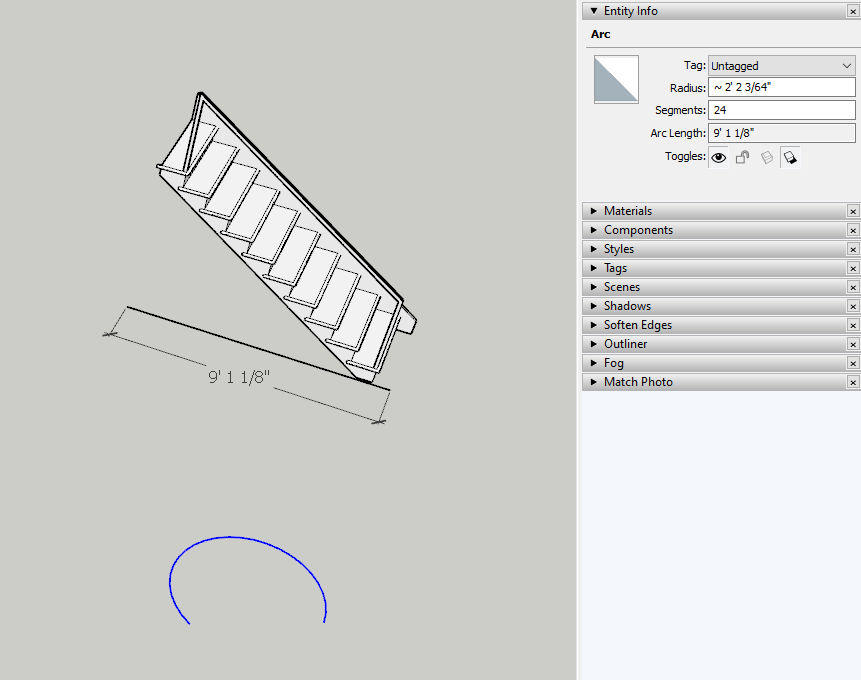 Starting Shape Bender initially the stairs are on the inside. 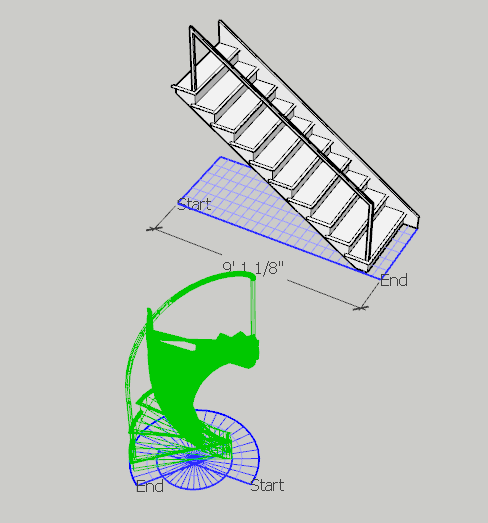 Pressing the Up Arrow key and waiting patiently Results in the stairs going around the outside of the arc. 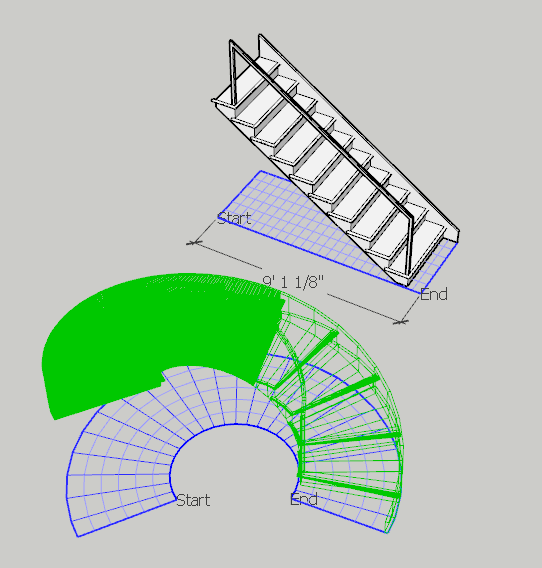 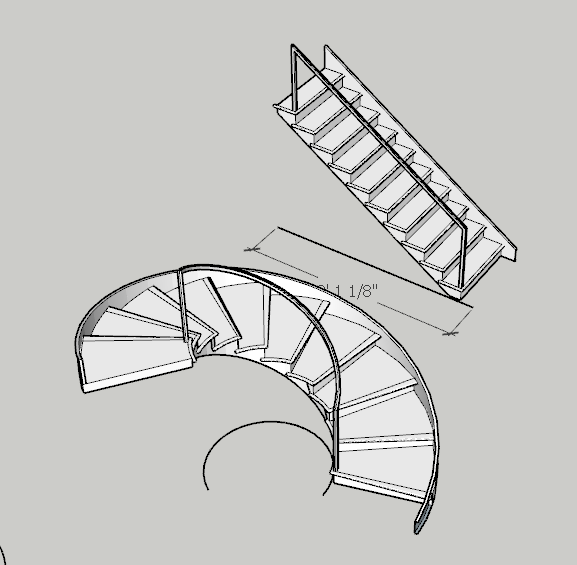 There’s still some distortion because of the way the geometry gets bent but it’s not nearly as bad as it would be with the resultant stretching using the arcs you had drawn.

If it’s only supposed to be representative of a siral stair case I expect it’ll be fine. If you are planning to use it to create shop drawings or something, there are better ways to model them.

It worked I would think this is the best way to build curved stairs including handrail and spindles.

I would think this is the best way to build curved stairs including handrail and spindles.

Again, it distorts the geometry due to the stretching involved. It won’t yield accurate shapes but again, if all you need to do is represent a spiral stair case, this is a good option.

Thanks. Just curious what other option work as well

I haven’t finished it but here’s a start. 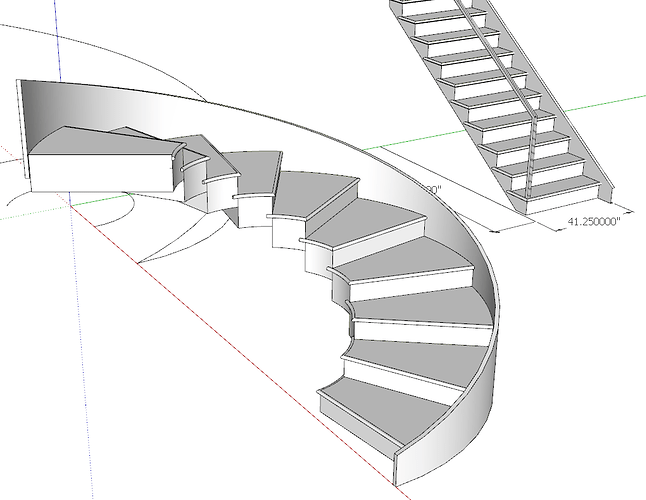 I used an extension to create a helical path to use with Eneroth Upright Extruder for the outer trim. did a little simple math to figure out the size of the treads based on dimensions in your straight version. The treads are currently components so they can be quickly edited as needed. Still need to trim the undersides and add the rail but the process is all similar to what I’ve done.

I just started working with Eneroth Upright Extruder. So far very time consuming. I think I can make the shape bender work.

It shouldn’t be. It works quite fast for me.

As long as the stretching and other geometry deformation isn’t a problem for you, Shape Bender is a good route.