Can you explain this?

See the attached file. When you try to triple click even the inside unconnected geometry gets selected. Can you confirm?
If yes how and why is it happening ?

Hey! That’s weird. I wonder why that is.

If you click in the emptied circle(blank) it selects entirely also. It means the circle face is still there but invisible.

Check with hidden geometry turned on. I bet there is a stringer.

I opened your file and it works fine for me.

Hidden geometry was turned on when I opened it. No visible stringers. And it does what ely shows.

The hidden geometry was on when I recorded. Nothing shows up. It was the first thought.
I want to say that the face deleted(hide) itself when I completed that rectangle.

Well I’ve exhausted my guesses so it’s to the bar for me.

Hang on, what is the flash of other geometry? Have you got your layers screwed up.

Nope, just one layer. I exit the component for a bit.

Hmm, interesting. Do you have the Check and Fix models activated? Even with that activated and even with a copy it will act the same. 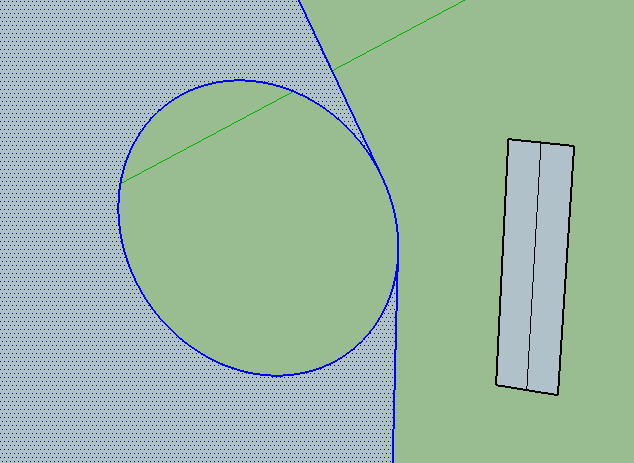 You’re only doing this to make me go home to my computer. Hurry up and solve it so I can stay in the pub and not worry about it.

Btw, this does not represent an issue for me. It’s just a weird discovery and I was wondering how and why.

Yep, even when you move the rectangle out, the face seems to still be there.

. Somehow the circle is ignored but if you delete a segment the entire face will disappear instead of filling.

Somehow SketchUp has gotten severely confused about that geometry. Probing with Ruby I find that it thinks the outline of the two rectangles is an inner loop of the large face! That’s what causes the weird results, but I don’t know how it got to that situation. Anything you do that forces SU to regenerate the large face will heal it - drag the rectangles out, delete and then redraw an edge, etc.

Try to delete the two rectangles and see what you find out about the invisible face.

It’s worse than I thought! SU initially thinks there are 116 entities in the model of which 197 are in the outer loop of the large face!! That’s too many to examine manually to see what is going on. Since it is also obvious nonsense, i need to check my Ruby probe to make sure it isn’t broken (it has been correct on every prior trial with lots of models).

Hey! I don’t know what caused this but here’s a quick fix. Wireframe Mode > Select All > Cut > Paste in Place > Make Face Plugin (or retrace one of the edges) > back to Monochrome. Also, double clicking on the right rectangle and deleting it somehow deletes the upper edge of the other one too, which it shouldn’t do by default (if I’m right).