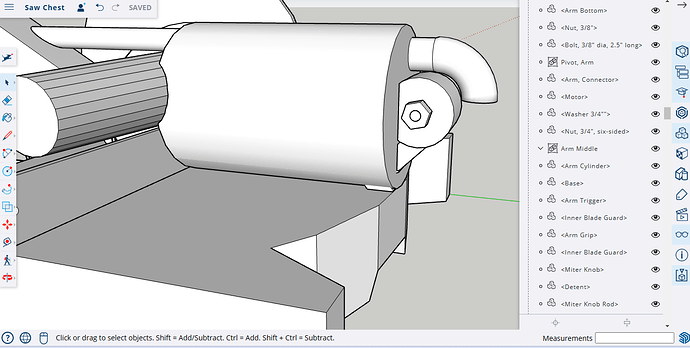 Looks like the box indicates a group. In your case is it possible it’s a group of components?

Yes, note the little arrow that means the tree will expand.

I surely wasn’t trying to make a group of components. I just converted the “Arm Middle” from a group to a component, though.

If you look at arm middle you will find it is made of several groups or components, it may well just be double nesting.

I just converted the “Arm Middle” from a group to a component, though.

What were the steps you used to do that? I’ll guess you opened the group for editing, selected all of the geometry, and created a component. This would indeed result in the nesting as described above. No need for that. Explode the top level group leaving just the component.

I see what you mean. Two diffenent things are called “Arm Middle”. I didn’t intend to do that. Will that cause problems?

Yes, you guessed it.