I have a Layout model which I created for electrical construction plans. I created this by first importing the .dwg files of the floorplans of a building into SU, then “sent to Layout” with one floor of the building for each page in Layout. I used a Tabloid (11 x 17) paper size when starting the file since I thought that would be large enough. I then wanted to add electrical symbols to the page (switches, receptacles, light fixtures, junction boxes etc.) but couldn’t find a scrapbook that seemed to have what I wanted. So I created my own symbols (not in a scrapbook) that are sized about right for an 11 x 17 print.

However, the scale of the floorplan background is 1/16" = 1 ft, and it turns out that is too small for the guys in the field using these plans to “scale off” the drawing. They instead would like it to be be printed to scale 1/4" = 1 ft instead.

My question is how best to do this? I don’t want to just export to pdf and then print 4 times the size - because then all my symbols and fonts will be 4 times the size as well. But if I just change the paper size and the scale of the floorplan background to 1/4" instead, then I think that all my electrical symbols would have to be re-located one-at-a-time, which I would like to avoid. I’ve attempted to include an image that hopefully helps explain the situation. The black lines are the imported floorplans, and the various blue colored symbols are the ones I created.

Thanks in advance for the help! 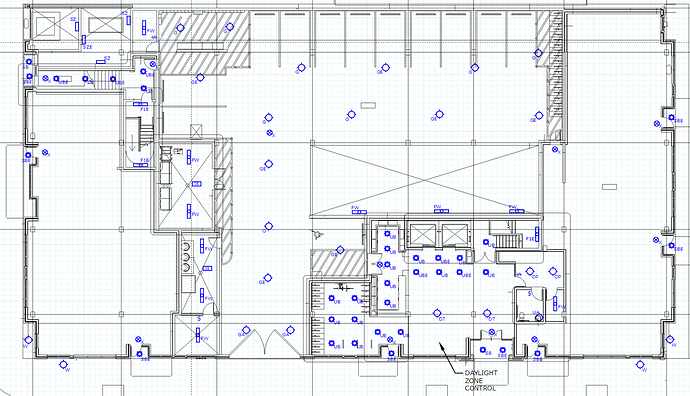 Unfortunately, I think the most accurate way to do that would be to do what you guessed and scale the viewports and move the symbols.