Zooming in through a face

The zoom tool is fairly intuitive - whatever your mouse is over sets the ‘scale’ of zoom you perform.
The “problem” I have is when I want to zoom through a face; brrr, brrr. brrr as I roll the wheel on the mouse a zillion times to get through the surface and see inside.

Can the zoom tool ‘ignore’ any face where you are zoomed in far enough that you can’t see most of it’s edges? Or jump the camera to be just inside that face?

Are you working in Perspective or Parallel Projection? I find it difficult to zoom through a face in Parallel Projection but easy to do in Perspective. I do this frequently to work on details where two components meet. Start by selecting geometry near where you want the camera to be and use Zoom Selection (make a keyboard shortcut for that) and then finish zooming in. Orbiting a bit can also help you get inside.

I seldom (if ever) use parallel projection - only when the 3D gives me trouble selecting stuff.

I can (and do) zoom then pan, but I could end up in the wrong room and have to do it again to go through to the next room.
I could (and do) use sections to position the camera, then turn the section(s) off again.
I could (and do) use x-ray mode to select a base line through the model and zoom to selection.
… However it can also be a pain when I am in a room and accidentally zoom backwards through a wall and have to brrr, brrr, brr to get back in again.

I suppose another solution would be if there was a command key combination with the wheel that would change the clipping sphere.

Well, for that last one, do you ever use the Previous command for the camera? On the Camera toolbar it is the magnifying glass with the blue arrow pointing toward the left.

(Personally I think that the only reason to click on the zoom button is to change the FOV - never clicked on the pan or orbit unless I don’t have a mouse with me; as such I’ve never really looked into the ‘last view’ button…

… I’m impressed: it’s actually quite clever and takes every pan/orbit/zoom done as one action.)

I never said anything about clicking on the Zoom button. I didn’t even use the word “Zoom” in that post. I only use it for changing FOV, too. I was talking about the Previous command. 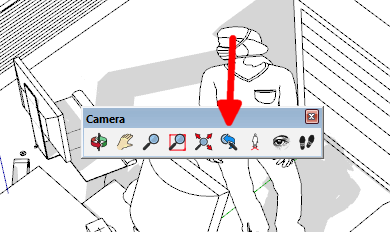 I suggest the exact opposite. Zoom tool should NEVER EVER zoom through a face no matter how long time you spend zooming into it. The clipping plane issue (which is what makes it possible to zoom through faces in the first place) makes it impossible to model small details in physically large models, and is in my view one of the by far biggest issues in SU.

If you want to go through a face use the orbit tool instead.

The clipping issue is something completely different and I agree should be looked at - although as suggested above it could be turned to a “feature” if there was some way to control it.

I think a toggle might be nice. I’d hate not having the clipping though I hate when the clipping becomes an issue.

A toggle would make sense. However, even now I always use orbit to rotate around a pivot point elsewhere on the face I want to go through since it’s so much faster.

I prefer dealing with it through sections, I plant a lot of them in the model but in some models I have a special section that cut’s away the ceiling and allows for free navigation on the model.

And once in your difficult to access room, create a scene so you can quickly come back to that view.