A personal project - maybe getting a little too complicated.
Location is northern Canada, clay soil, maybe a little boggy.
Doesn’t need a building permit (8x12’)
Fairly sheltered location - not subject to strong side wind load.
Using about 1800 lbs of cottage pads (24x24x3.5 concrete) to weigh it down - instead of screw piles etc.
All pressure treated brown except at the bottom - foundation wood.

Looking for comments, suggestions, criticism on the design of this wood shed. 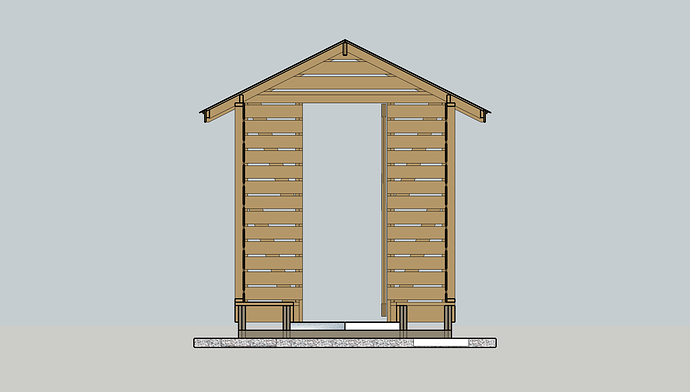 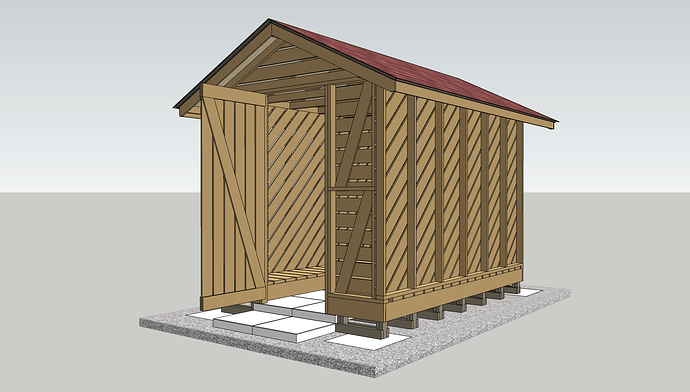 Thanks - we had engineering advice that a simple 2x4 triangle truss is enough for at least a 12’ span with our snow load.
Considering future climate conditions, I would want to double the load capacity, so this would be close to that.

It might help to specify where all the screws go by using low poly cylinders to represent them. You can put them all in a group to keep it organized.

I would say you are good to go! I would however rather there was pad bearing under all the base supports…or replace those base supports with 2 6x6 beams running the length of the building and on which the joists rest and fasten.

It’s a nice looking model. I think your roof will be more than strong enough for what it needs to do. My garden shed has a roof with 2x4 rafters. Same size as yours. Over 2 feet of heavy snow on it for about 3 weeks. None the worse for wear.

I’d be inclined to leave larger gaps between the planks on the sides. I’d also put them on the outside instead of inside the studs.

There’s no reason at all to show where all the screws are going to go. What a waste of time that would be.

How well it is screwed together will certainly make a difference to the overall strength.

(if my nephew was putting this together, I would definitely indicate screws).

Do you mean 6x6 beams on gravel?

I would leave the pads at the ends and add another at midspan but being in contact with the gravel would be ok if they the beams are rated for ground contact (.06 ODL or AWW). That way each joist is aided by the ones on either side to resist deflection and all joists are fastened to a common carrier on either side. It would also speed up leveling. hmmm…looking at it again I can see the problems with that idea…your joists don’t run all the way across the building. You may want to re think that. It would mean raising the door up to accommodate a joist below but that might be a good idea anyway given ground snow.

This is a cottage location - when I was about 12, I made a trip up in the winter to clear snow over 4 feet deep from the main cabin roof - in some areas around the cabin, the snow reached the eaves (fortunately, the roof had not collapsed).

A few other criteria we are trying to meet -

Eliminate access to the wood shed for squirrels or larger animals (we will want to store other items as well as wood over the winter) - we guessed 1" gaps in the siding would do it, but maybe that is too cautious?

I was exploring a design without screw piles, but still guarding against the structure being blown over in a strong winds. The advantage of this design is that the wood piles get more ventilation from underneath - not sure how it will work in terms of keeping the wood dry.

did you have a specific reason for putting the siding on the outside of the studs?

Thinking about gaining a little more interior space. Also trying to keep some water off the bottom plates.

Understand the idea of keeping the critters out. Closer together would be better but if there’s something stored inside that squirrels would want, the narrower gaps won’t slow them down much.

You know it would be pretty simple to prebuild floor & wall panels and trusses at your home location to haul there and assemble, saving a large amount of onsite carpentry. It might require two people but it would save time on site. Nice modeling though.

I am strong believer in prebuilding, unfortunately, our condo super would disagree.

These personal projects are partly about enjoying time at the cottage with something interesting to do.

My comments may not be applicable in your part of the world but if this were here in the UK, the biggest problem would be addressing wood rot. You seem to have a lot of wood in contact with the ground (I don’t know what foundation wood is but I also don’t know of any wood that is impervious to rot if kept perpetually damp).

Also, you have diagonal braces that act as a conduit for trapping rain. Having the boarding more conventionally on the outside would help prevent that (why are they on the inside?).

Otherwise it looks well and would do what it needs to I think.

This is a Canadian code (permanent wood foundation)-

The priority for the siding being on the inside of the studs is due to it being knocked off by firewood being roughly loaded and bashing against the siding.

Perhaps eliminating the central walkway would increase storage space. I found this image on Pinterest. 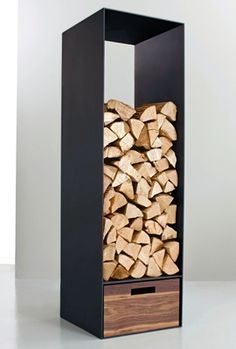 Sep 1, 2015 - Wood stored for a fireplace or a wood burning stove does not have to be an eyesore! Checkout these seven innovative and beautiful ways to store your firewood:   Under Staircase Underneath the staircase is often a waste of space. I...

Ideally, I’d prefer the firewood to have protection from rain, mildew, and mold, but I’m sure it’ll still work with the gaps just fine. 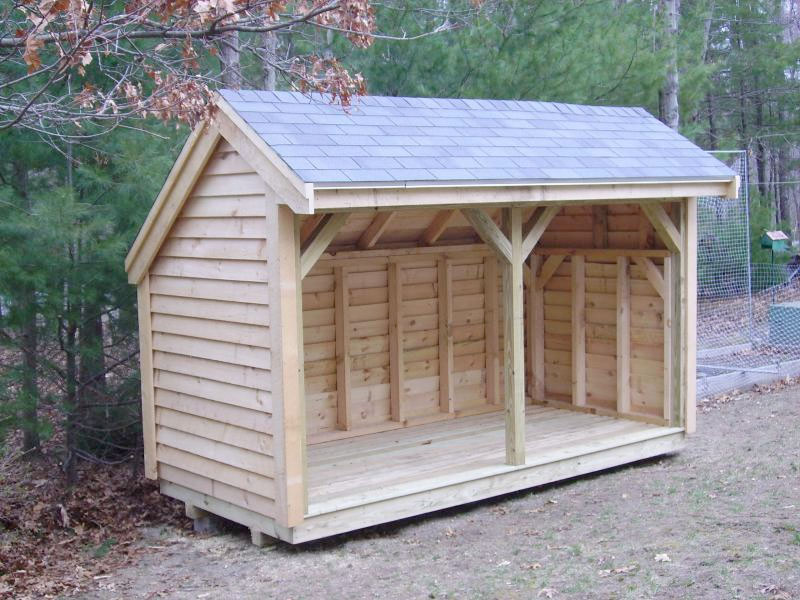 If the idea is to keep the water out, yet let wood inside dry out over time to the air, I’d consider shingling the exterior with cedar shingles on “skip sheathing.” It will keep rain out while letting air pass through. It’s what tobacco barns do, though they’re a little more breezy and less water resistant. (A long standing and dying tradition in Connecticut)

The whole thing will heave with frost, but as long as it’s rigid enough unto itself, you can do that with small, free standing structures like this.

You can also probably keep the rain out with a tarp shed. I designed this one. Also, the clear tarp will probably help dry out the wood by exposing it to sunlight. It might be a bit cheaper, but I’m not sure if my design would work since I’m not an architect. 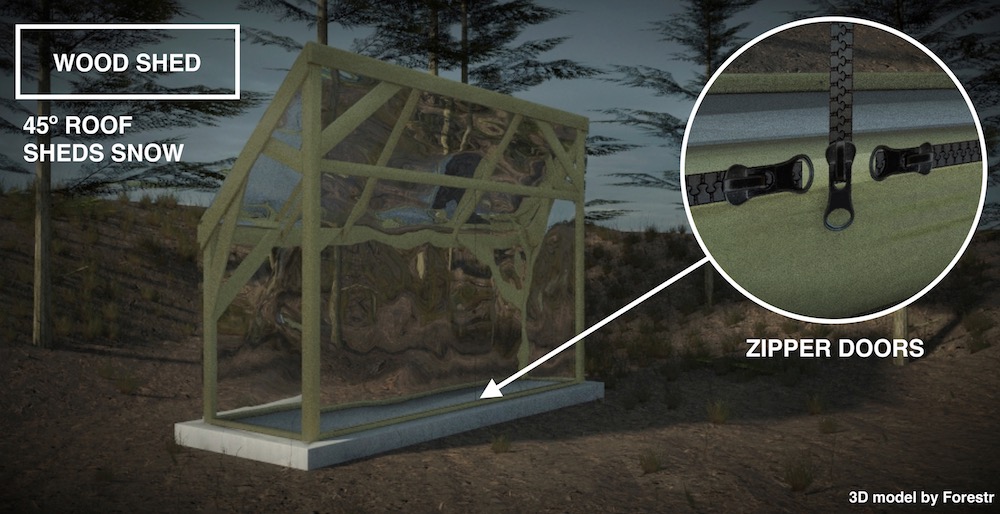 AIRFLOW priority
As an enclosed firewood storage structure is a bit unknown to me, priority is given to optimising airflow
Underneath, Sides,
Top ventilation layer to minimise humidity build up in roof volume 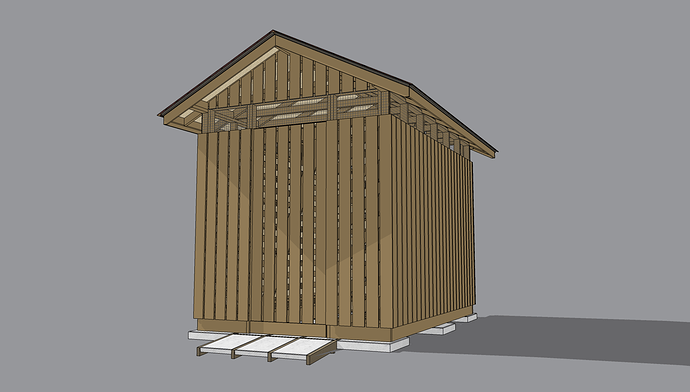 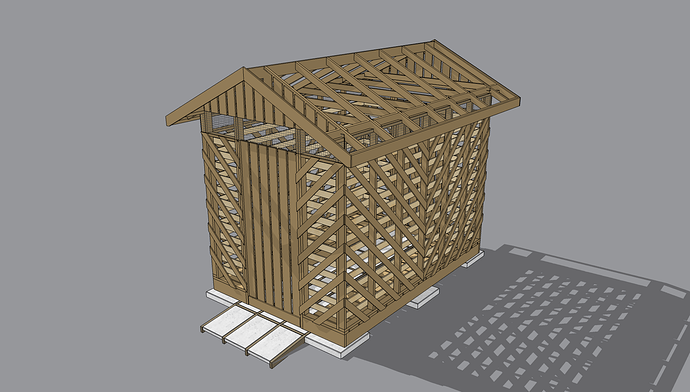 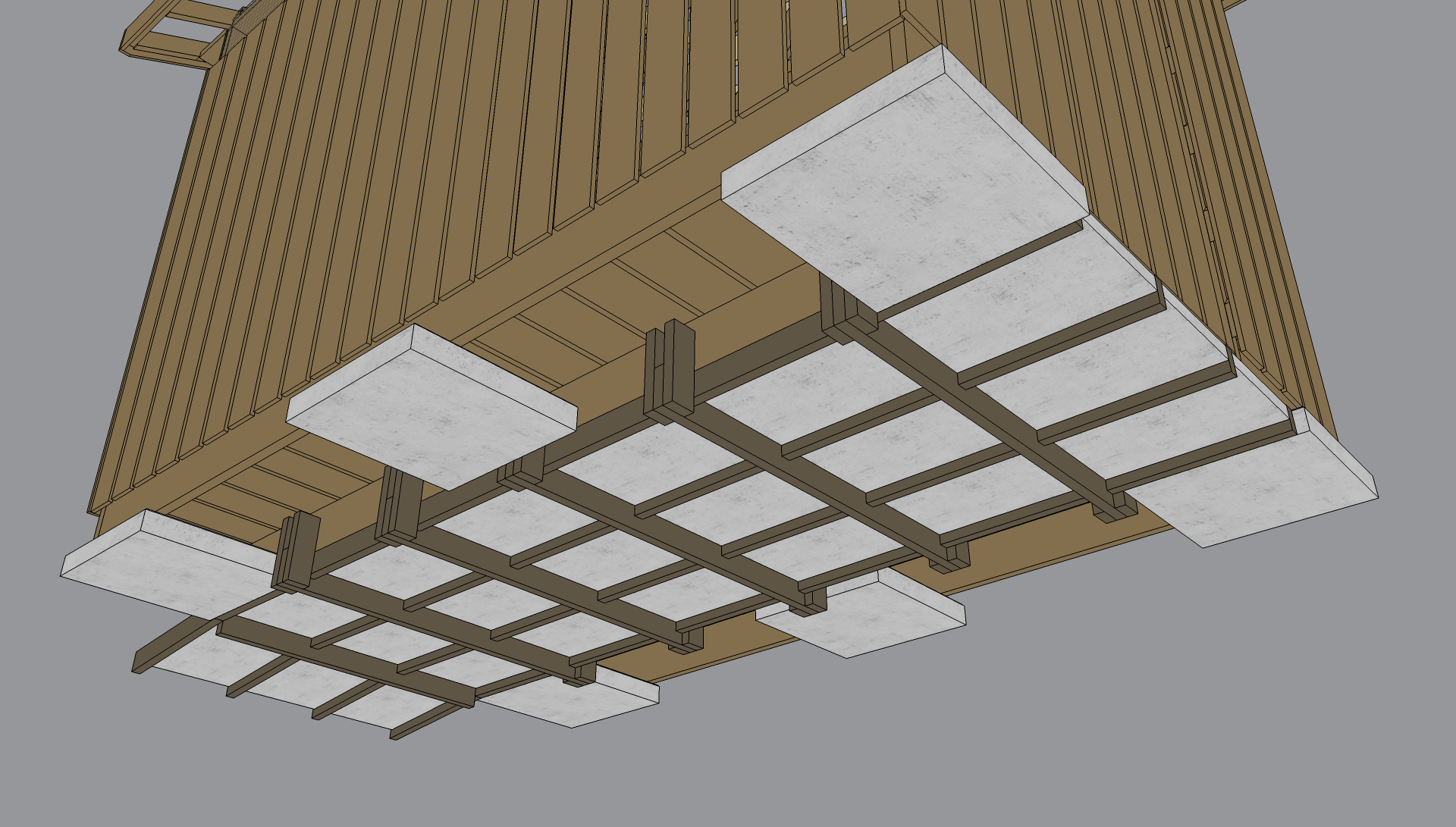 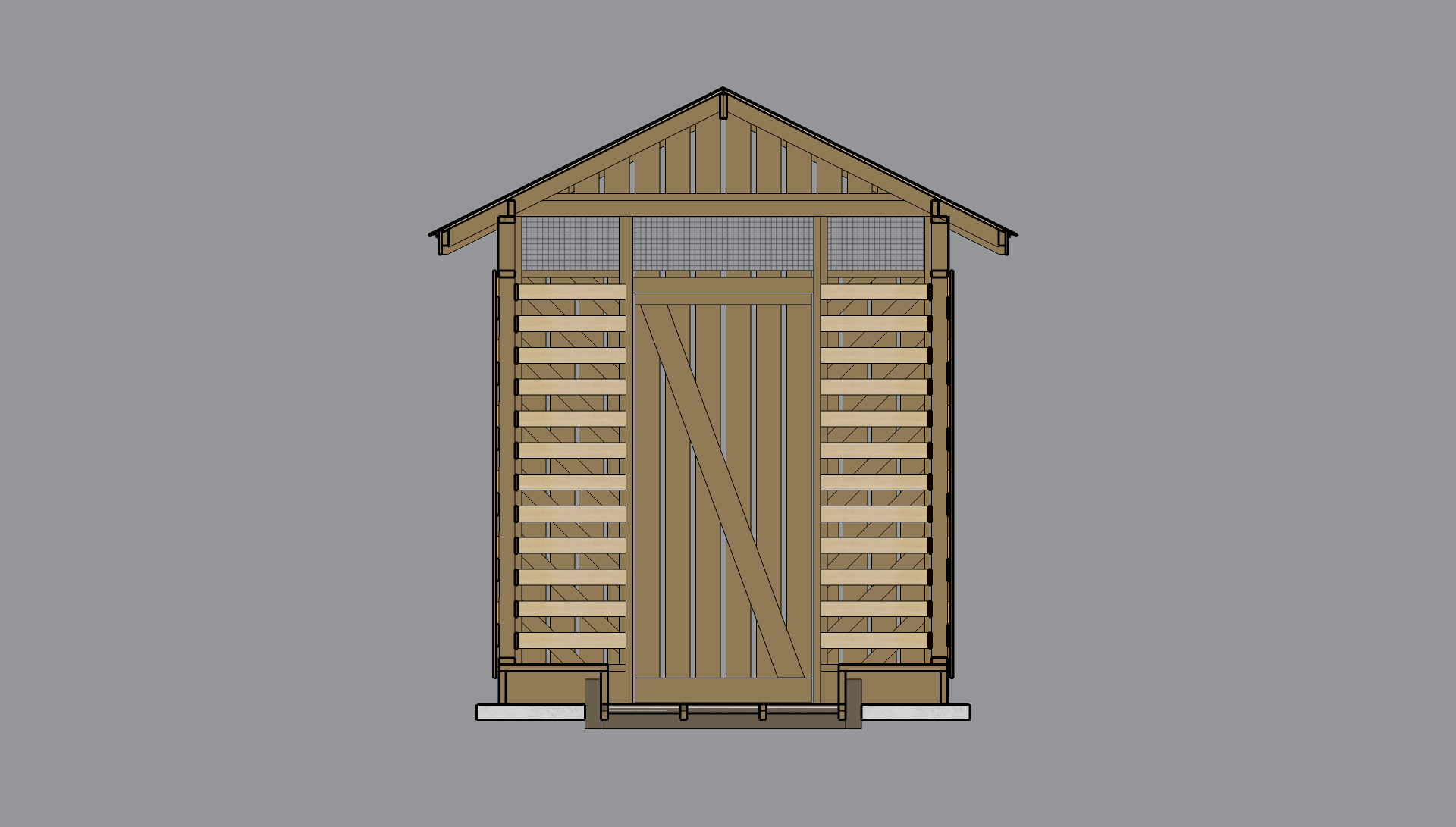 That looks good. Can you minimize the contact between the wood and pavers to reduce places for water to get trapped and reduce the chances of getting rot? What about running the screen all the way to the floor to discourage the little critters?