We've made a substantial upgrade to Add Location!

Since this is a main feature we often use, will test it in The Netherlands:
{Sketchup PRO 2021} 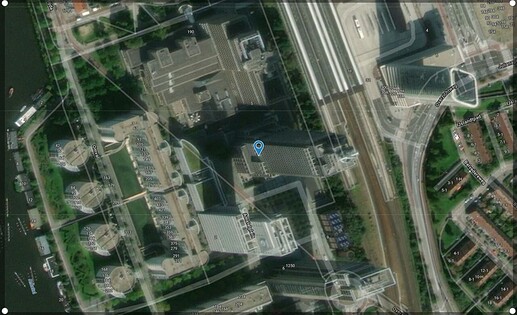 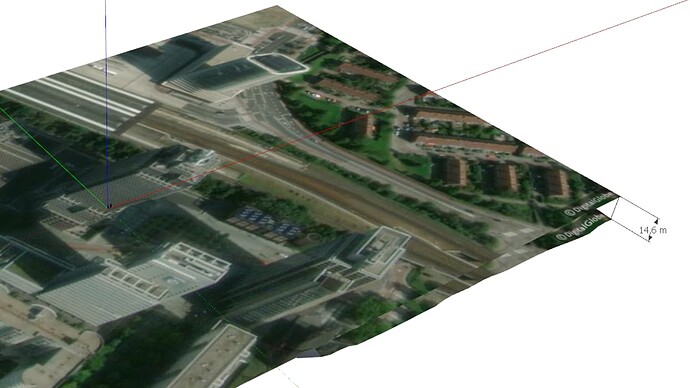 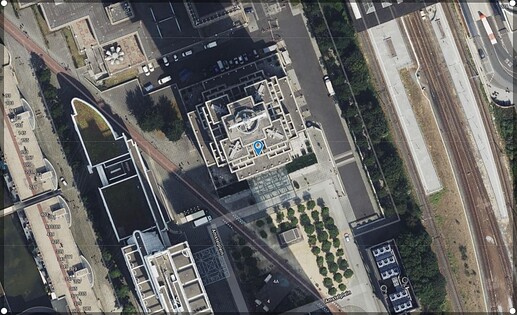 in comparison with a photo i just made: 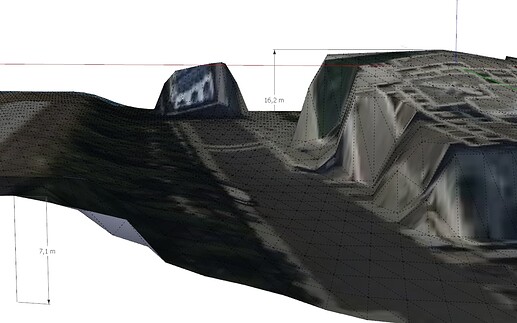 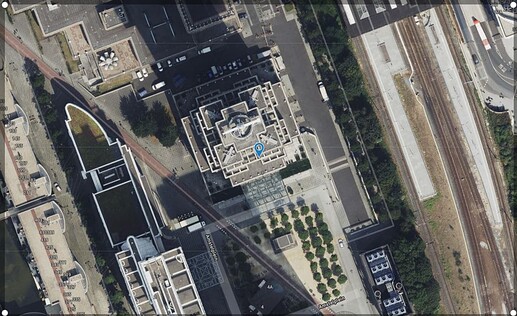 Quick Conclusion:
Higher quality photos are very welcome, butt only IF they work!

Terrain (at least for The Netherlands) is stil very inaccurate.

May reconsider my conclusion when issues are fixed.

After some quick testing Im really happy with the coverage and the resolution, and the fact that Nearmap is still available as an option. I haven’t tested the authographic projection or the terrain.

So far, two thumbs up from me!

Just one issue though - what’s with the TrimbleMaps logos everywhere??!
They don’t look very professional in a design presentation (and they closely resemble the colour we use for wetlands and watercourses).
I’m going to have to photoshop them out.

If you need to include a logo for legal reasons, then please make it a transparent watermark or similar so it doesnt conflict with technical symbology. 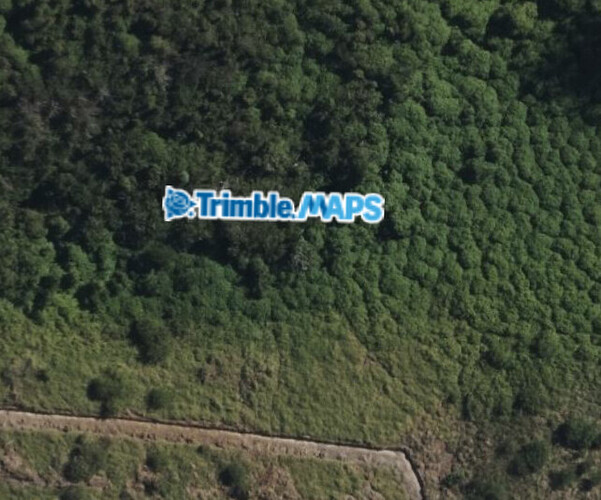 Looks great! But I have a UI request: The selection box is still centered on the entire view (which itself is partially behind the boxes on the right). This can hide it in some situations (see image). How about you center it on the visible portion of the view instead. 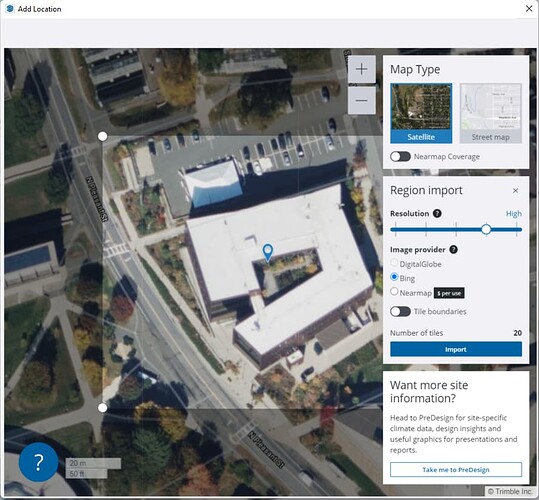 …and, how about letting me close the PreDesign advert. Once I have read it, it’s just in the way.

Yes, and I’d prefer a selection box that had moveable independent edges, rather than ones that scale around the centred portion.

What happens if you make the Add Location window larger? Can you get the selection handles to be visible? 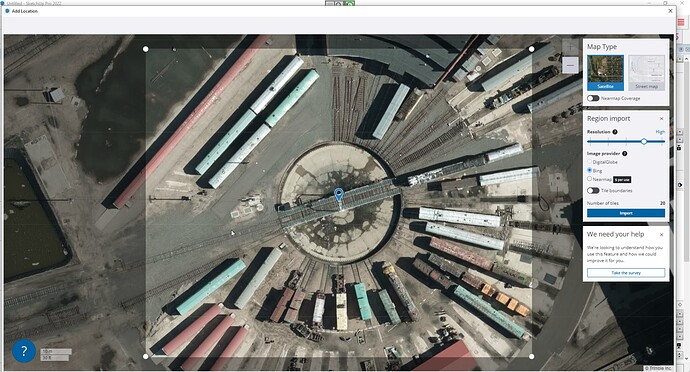 Bit of a stumbling block for me here…

What I like to do is take the aerial image into photoshop and:

Unfortunately the images come through as many individual tiles so Im not able to quickly/simply open that image in Photoshop/etc and update & replace it. It’s a bit of a process to do this with so many tiles.

Further, all the images are named the same (Location Snapshot.jpg) - would be nice if they were named Location Tile A1, A2, B1, B2).

Overall the imagery in my location comes out quite dark and a bit “drab” looking. This occurs with most satellite aerials from every provider. Thus editing is always part of my workflow. 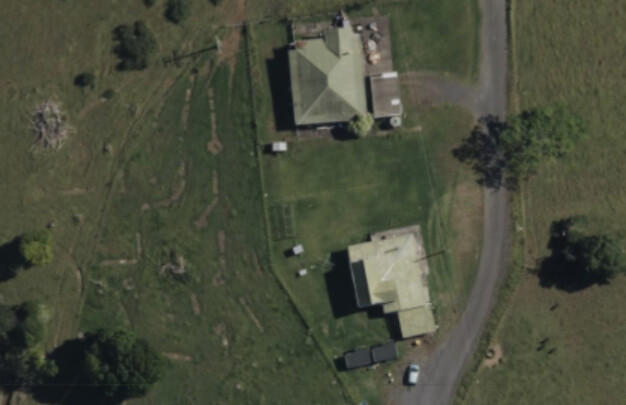 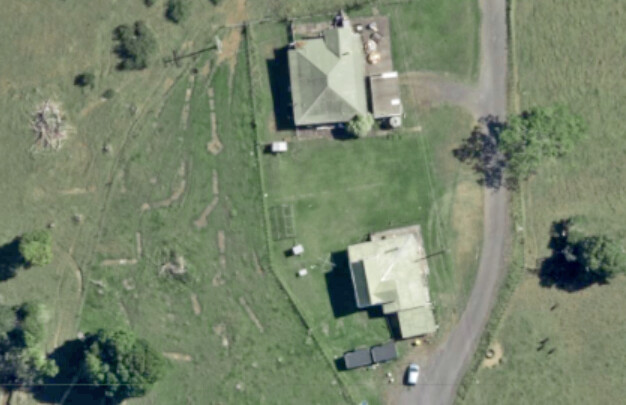 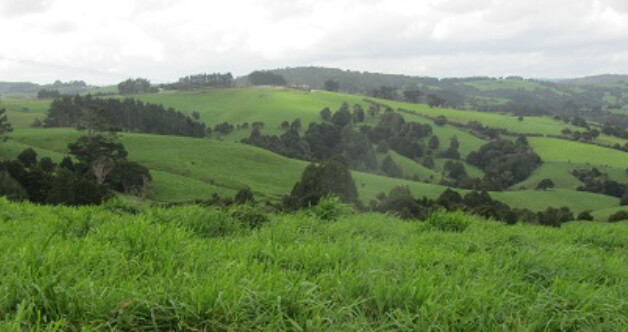 Much Better, at least we can see stuff

Thanks for the feedback everyone!

Also there were a few bugs in the iPad version relating to gripping the box which are also resolved.

Some feedback after running a few tests.
At first I checked in Marseille, south of France, it is a major city (second in the country), yet :

then I started checking various places, places I’ve lived across Europe, places I’ve worked on and… yeah.
Digital globe is often a couple year old, and bing is often worse - albeit in a better quality - the most recent place I’ve found seems to be Paris, with photos from summer of 2019.

So yeah, it’s really cool that you added another satellite map provider. And maybe in the US it’s good quality. But in Europe, as far as I can say, it’s a chocolate teapot.
And I understand that you don’t want do deal with all the national cartography societies (the IGN, equivalent of the USGS in France has really good quality stuff), and there is a solution.
there is a map company with good quality, quite recent photos that you can zoom on.
It’s google map.

I’ll keep an eye on your solution, but I’ll also keep using a combination of Cadmapper (get openstreetmap data in 2D/3D) + ggmap screenshots assembled, scaled and placed on top if really needed.
——

Terrain is still average, but that’s because it’s calculated on a territorial scale, not an urban one. So airport, bridges can look funky, and areas with high building can alter the topography. It’s not a sketchup problem, it’s a “scanning topography from space” problem

And I understand that you don’t want do deal with all the national cartography societies (the IGN, equivalent of the USGS in France has really good quality stuff),

there is a map company with good quality, quite recent photos that you can zoom on.
It’s google map.

Yes, but its TOS forbid all commercial use and use in other applications. When SketchUp was owned by Google, this was otherwise.

Yeah, same in france, they are even lidar-scanning the entire country right now.
I wonder how difficult it would be to adapt the current tool to allow grabbing another source. I know, skp devs probably don’t want to spend the next year adapting the tool to all “local” solutions, but…

I mean, look at what Switzerland is working on. Bern, Basel and Zurich in full 3d with cadastral information on the buildings. it’s years ahead of digital globe at this point.

It’s really a shame about google, I remember reading about it when they sold skp, really a shame. Especially when web-developers are able to pay for google map API and usage in websites and applications.

Thank you for the links!

I clicked on the link that says “Discover how to keep using Nearmap imagery” and lead me to this conversation, so how will we still be able to use Nearmap after it’s no longer a sketchup provider?

Placemaker do a pay as you go subscription, where you buy credits, then can spend those on various things, including Nearmap tiles. 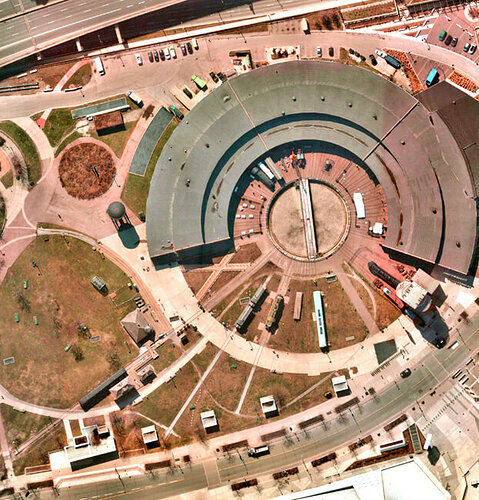 PlaceMaker has partnered with Nearmap US Inc. to integrate the highest quality and most recent aerial imagery available directly into SketchUp!  Nearmap aerial imagery resolution is an eye-popping 2.8" (7cm) which is 4X the resolution of the...

Thank you, Colin for providing clarity on this.

Hi Folks,
We have been able to remove the Trimble maps watermark from Add Location downloads so it should not be shown anymore.
The usage copyright information has been collated in one place and can now be found here.
Thanks!

I dont mind the odd discreet logo but no logo is even better.

The images are coming through as a series of small tiles.
For urban planning work it’s common to have large-scale models (1mile or so) and these tiles become a challenge.

I’m guessing there are reasons for tiling the images (download performance, gpu performance on ■■■■ computers, etc) burt can there be an option or override to go back to having just one large image??

When adding additional imagery, the new tiles don’t come through in the same position as the previous set; The best approach would be to to the original image by enlarging it and essentially just making it a sngle objevt that is larger - because now, we end up with multiple overlapping images of different shapes and boundaries.

It doesnt’ appear that the boundary of the Selection box saves between when I first use the Add Location tool and then wehn I use it next - it’s not a very accurate or reliable section from what i can tell.