Hello folks, I was hoping someone could help me figure out how to re-trace an object and then use the follow me tool? I downloaded an image off the internet and I am trying to re-create the spindle of this bed and then create my own head board and foot board portion.

As you can see I attempted to trace the outline of the spindle but cannot seem to use the follow me tool now? I know i did something that is just not right? LOL

Hopefully someone can shed a little light on this for me, or maybe it cannot be done?

Than ks so much!!

It can be done. I would start with making the imported image quite large. Don’t worry about its real length at this stage. Then you can trace it with the various drawing tools and resize it as needed. You only need to draw half of it so find its centerline and draw that.

I’ve done a couple of tutorials on this sort of thing. I’ll see if I can find them for you.

You have traced (I think from looking at the image) the outside edge of the spindle. You need to draw a straight vertical centreline as well, then connect the centreline and the profile edges to make a face for FollowMe to follow.

Note that the part of the posts where they join the footboard and headboard is usually square, not turned. You will have to do a follow-me to “lathe” the top part and the foot part and then join them to the square sections. If there are “pommels” (turned transition faces) where the turned parts meet the square, you will need to create them using Intersect Faces With…

Steve makes a good point about the square sections. I’ve done tutorials on making that transition, too. I’ll look for those while I’m at it. 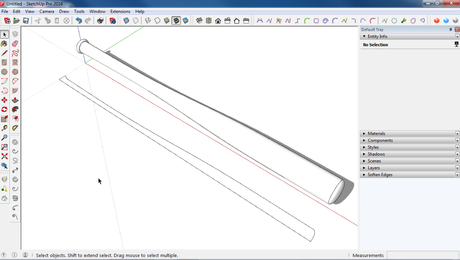 A Baseball Bat From Offsets - FineWoodworking

A reader wrote to me for some help in making a pattern to guide him in making a replica of a baseball bat owned by his father. He had measured the diameter of the bat at regular intervals along its...

Thank you guys! Been away the last few days. All your help is always appreciated!!