Recommend a program to clean up DXF and DWG files before import to SKP?

I am a builder / designer and deal with a fair number of dwg files from surveyors, etc. Because skp discards a lot of data during these imports, I would like to try using a CAD program to first open these files in a native CAD program, modify them to be more skp friendly, and then save them out as a dxf or dwg for import into skp.

My skp / lo skills are good, but I know effectively ZERO about drawing in a CAD program so I am looking for a very basic CAD program that can open these files, explode entities, and then save the file out as a dxf or dwg for import into skp.

Note that I have tried the AutoCAD Web app for this but it seems to struggle with some of the files due to xref issues, fonts, etc.

Any recommendations for a basic CAD program? Also, does anyone have a process they use to accomplish just the kind of thing I am referring to?

I would prefer full AutoCad after having used it for more than 30 years. Not because of that, but as it has powerful but not very intuitive selection tools to help with cleanup, and the possibility to develop some more of your own.

NanoCAD has a free version

I prefer Acad as well but I think it’s selection tool is pretty intuitive. Pretty easy to use the ‘Isolate Layer’ command to separate layers for editing. That and the ‘Overkill’ command along with ‘Purge’ seem to get the job done for me. One can also just freeze the layers you don’t need and just ‘WBlock’ out the remaining items to bring into SU.

That and the ‘Overkill’ command along with ‘Purge’ seem to get the job done for me.

Flatten, too, although when I last used it it wouldn’t flatten everything. When I had to clean automatically vectorized scans (generally a waste of time) I made an AutoLisp that deleted lines shorter than a determined length. I also have an AutoLisp routine that adds geometry to spot height values that are text objects so that a TIN can be put over them in SketchUp.

Trimble Connect handles reference files if they are in the same (relative) path as the original:

You do need them, though, so make sure they provide it.

These are the available commands, btw:

@Elmtec-Adam - Thank you for pointing me to Trimble Connect (TC). I did not know it existed.

@MikeWayzovski - As a complete novice in CAD the link for the available commands was VERY useful.

I have used the SelectAll, Clean, Explode (every explode option), DetachDrawing, and a few more.

“Some imported geometry is extremely far from the model origin. If you experience any instability with your SketchUp model, please delete that geometry from your .dwg/.dxf file and import again.” In skp I can see that the imported dwg is - as stated - very far from the origin. Easy enough to move it in skp, but in TC I have no idea how to move the model in relation to an origin axis.

On import I also get this message:

Before cleaning up the file in TC the “Coords out of range” number was 213 so it is dramatically smaller. The AttDefs number was 6 (now 3), and anonymous blocks was 226 (now 203).

The number that has not changed at all is Proxy Objects at 433. When I import the cleaned up TC file into skp it is still missing about half of the trees from the survey. From inside TC I know that these trees are individual groups (not sure if that is correct CAD lingo) that will not explode, and when you click on one it is called a “ProxyEntity”.

Is there a command to explode these proxy entities, and any thoughts on how to improve the other items that skp is still discarding?

I have been researching Proxy Objects (POs) to figure out how to explode the remaining POs.

These proxy objects also cannot be combined into a block. The command runs, but nothing changes.

FYI, the “Kryptonite!” command also does not work on proxy objects!

I have been researching Proxy Objects (POs) to figure out how to explode the remaining POs.

The presence of proxies indicates that the file was originally created in a “vertical” AutoCad addition like AutoCad Civil. Those objects are proprietary and cannot be read by non-Autodesk applications. The best solution would be that the originator would use the “Export to AutoCad” function in their app to create a plain vanilla version of the DWG.

Hi, might I suggest that you look at a Bricscad 2d drafting licence - https://www.bricsys.com/ ? We’ve been using it for years and it packs a serious punch in terms of commands, for way fewer do$$ars than anything Autodesk. Anyway, that my two cents…

Thank you to everyone who helped on this one.

@Anssi I simply copied and pasted your note regarding proxies and sent it to my surveyor. He was able to Export To AutoCad and the file then came into skp beautifully.

I do still have to use TC a little to explode text but that is a very easy process and for my needs TC seems to be the answer.

The other thing I did was ask the surveyor to move the model closer to their origin. They were able to do this and it solved that problem.

We are going to count today as a win.

I’ve been using AutoCAD LT for years and for what I’m doing I can’t discern any difference between it and full-blown AutoCAD.
Had bad luck importing site contours out of surveyors’ or Civil Engineers’ files. For whatever reason, they have about a million vectors over the site area where 1,000 would do, and the system gets bogged down [for no good reason].
Thus – what I’ve been doing, even though it takes some time – is to import a JPG that has the contours and property lines, scale/move it into place and trace the contours over the top. Layer name in AutoCAD following the contour, i.e. 759, 760, 761, etc. Each contour is a polyline, and when I’m all finished each polyline is converted to a block. Then this file [careful that it includes only the property lines and contours and maybe the building outline and driveways] is imported into SketchUp. The polyline blocks are now SketchUp components and each is selected and copied up into place (759, 760, 761 ft., etc. on blue axis). Begin to see the landform. Explode all the elevated components. Then, Sandbox Tools to create the finished landform.
Now I’ve got a landform of reasonable complexity and file size that can be trimmed, modified and gives an accurate impression of the site topography. 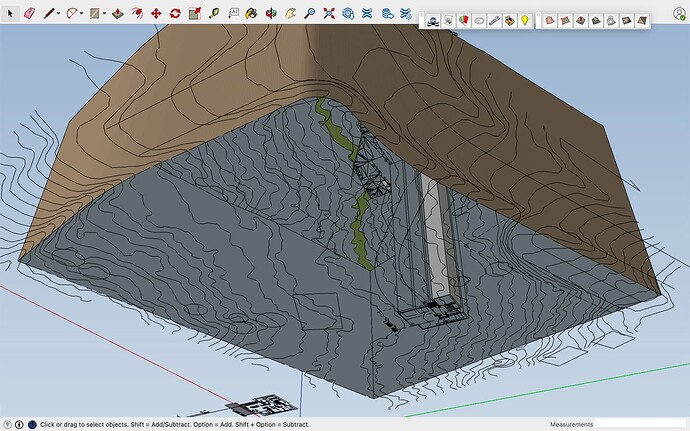 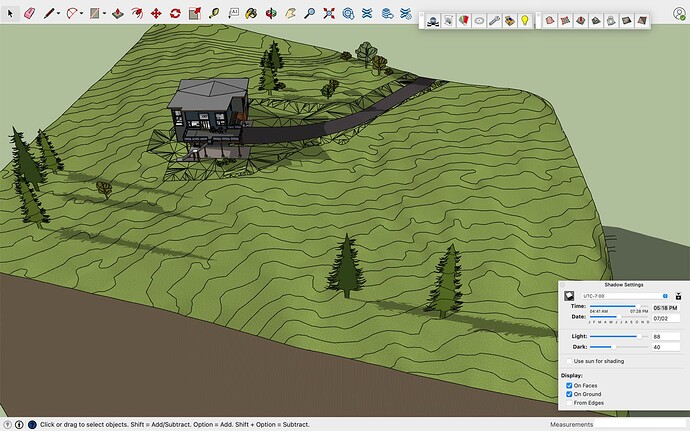 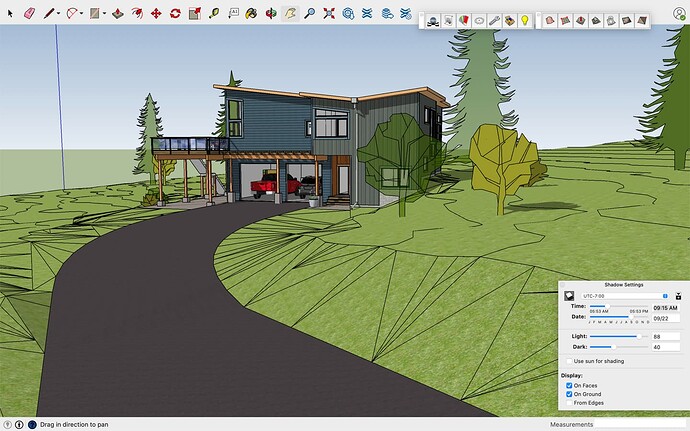 I’ve been using AutoCAD LT for years and for what I’m doing I can’t discern any difference between it and full-blown AutoCAD.

Lisp routines, ARX, 3rd party plug-ins, 3D solids, surfaces, meshes, rendering engine, materials and the vertical toolsets would be some of the main differences.
If if does what you need then all the better.

@yerrington
You may want to try the the Inkscape program for your conversion from a clean JPEG. It will save you from having to trace anything. It converts PDF files to DXF in just a few steps (you will need to get your file as a PDF). All I do is drag the PDF onto the Inkscape new document page, and then “save as” a DXF R14 (very simple). Then import that dxf into a new skp file and scale it to the proper size.
Eric

DoubleCAD XT allows you to explode texts. Very useful as you can import them as edges and read them in Sketchup or display them in Layout.