I’ve experienced this issue for years and am just finally trying to figure out if it’s there’s a fix or workaround that I’m missing:

I often export perspective scenes in layers to PDF and assemble them in Illustrator. I typically use low-poly models. In Sketchup, Objects closest to the camera typically export fine to PDF. However, the further the object is from the camera, the more likely it is to be missing faces when exported to PDF. As well, the smaller the faces, the less likely they are to export. Here’s an example of a pedestrian signal head, ~70 feet from the camera, not the missing faces on the curves of the object. 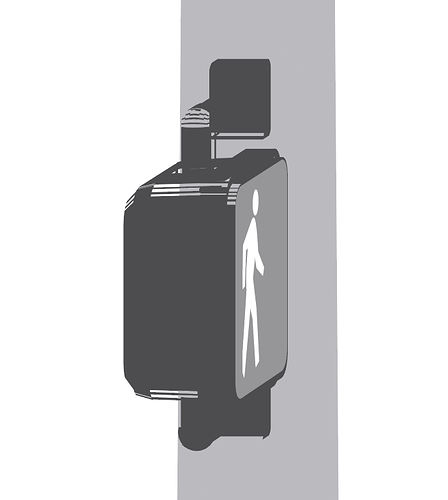 These missing faces create unsmooth images. I end up spending too much time trying to fix these unsmooth edges in Sketchup. Increasing the size of the image export doesn’t change this behavior. Changing the OpenGL setting has no effect either.

Does anyone know a way to easily fix or address this PDF export issue?

The one workaround I have found is to set up an advanced camera, roll the camera toward objects in the background, and export from this new zoomed-in location. However, this creates a lot more work because I have to reassemble and scale objects in Illustrator. Any ideas appreciated.

Can you share the .skp file so we can see what you’re working with?

Test_SUForum.skp (3.5 MB)
Of course. I’ve attached a simplified model with a view and a few objects that make my point.

I see what I would expect to see in exporting a PDF from SketchUp. All vector lines and colors. 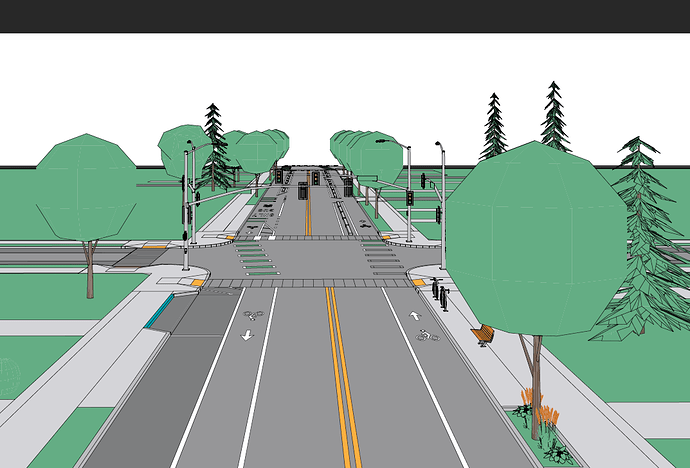 Exporting from LayOut give a much better result with the viewport rendered as Hybrid. There’s still Z-fighting for the same reason as above but the graphics card is trying to render both here. 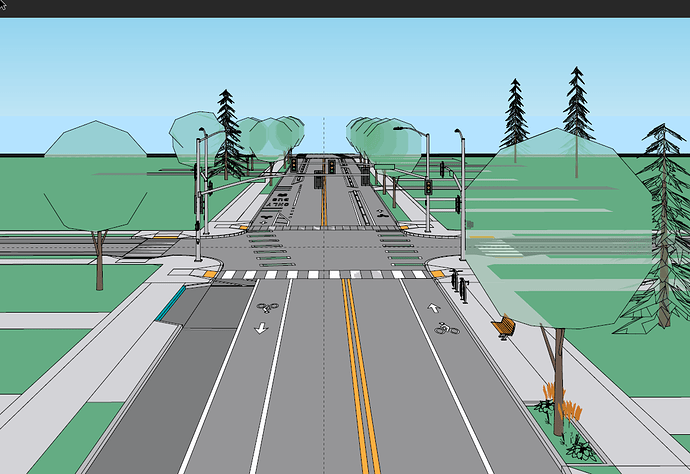 If you wanted to export different images from the scene you can create multiple pages in LayOut and turn tags on or off for each viewport. Then export a PDF file or probably better, PNG images of each page.

Thanks, @DaveR . I would use Layout more, and stack viewports to get an effect I like, but Layout is exceptionally slow at rendering the vector lines in the kinds of images I create.

Moreover, from a distance, this image you shared looks fine. But I bring PDF layers in Illustrator and apply strokes (i.e. I typically do not export edges from Sketchup). For example, in the model I shared, this is what happens to the objects with smaller faces, exported as PDF, opened in Illustrator, same color faces united into a single shape, with strokes applied:

All of the missing faces create objects that are jagged, not smooth. And all these extraneous lines create a lot of visual noise. Here’s what it should look like: 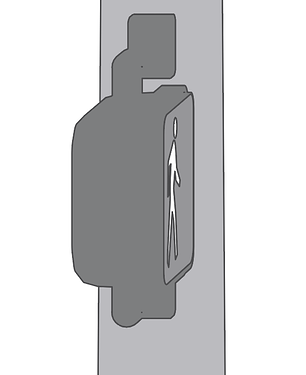 For some reason, Sketchup does not export all of the faces of an object when the object is a certain distance from the camera.

LayOut doesn’t have to be slow. It depends on how you set things up. The PDF export is always going to be better from LayOut than from SketchUp.

Sketchup does not export all of the faces of an object when the object is a certain distance from the camera.

I think you’re running into a limitation of the PDF exporter.

I typically use low-poly models.

well it’s funny that the high-poly models are the one messing with you. turns out the pedestrian sign is 5650 entities big.

a solution (in SU) could be to simplify the designs. after all, it’s going to be super distant. Here are two examples, it took me 15 min to roughly redo with way lower poly count : 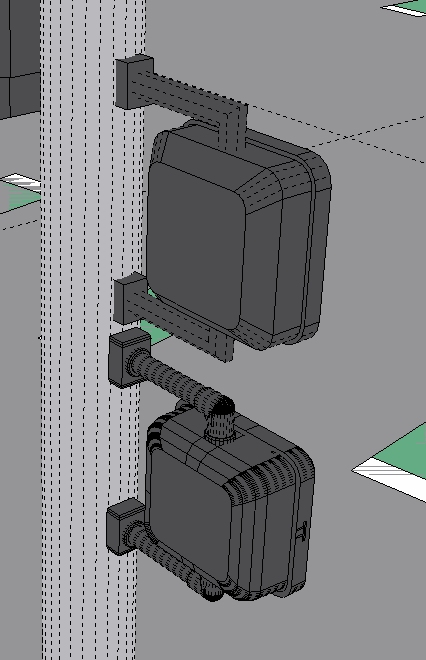 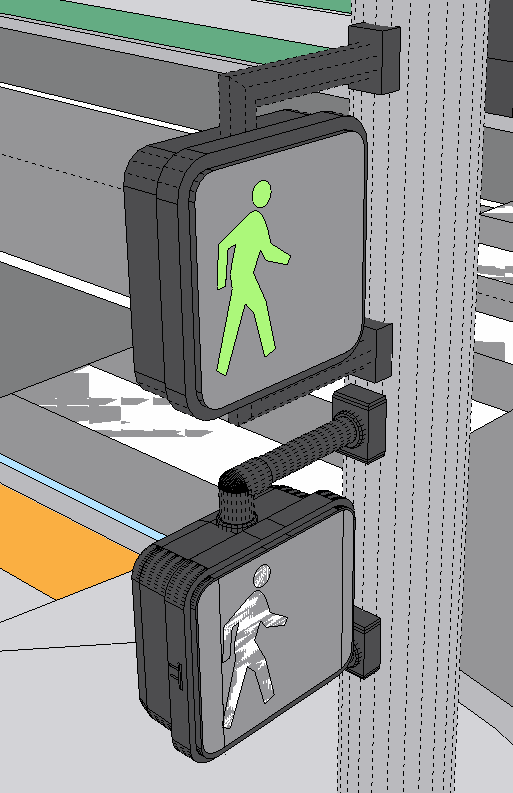 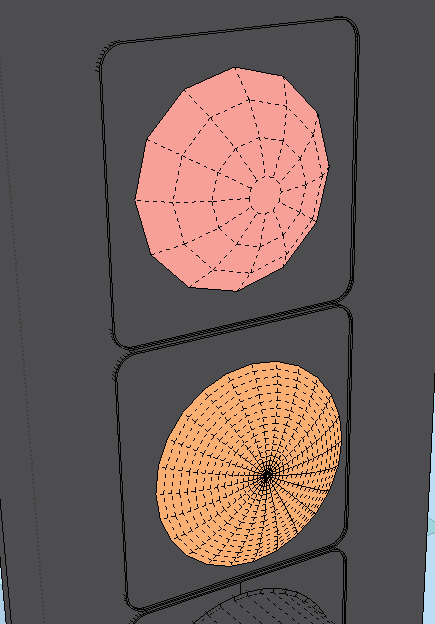 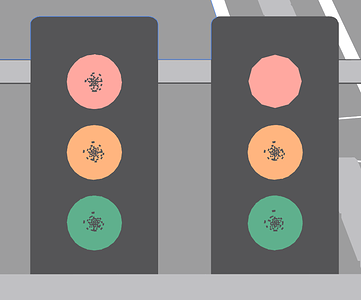 So, if you’re behind the designs, know that you can simplify. If you’re using 3dwarehouse models, you can redesign and simplify elements with too complex geometry.

I think you’re running into a limitation of the PDF exporter.

indeed, SU’s exporter has trouble with super tiny faces in pdf / eps. and off course, distant objects have a tendency to have tiny faces.

——
sorry for the double post, my connexion crashed while I was editing, and it double posted when I saved.

Thanks, @ateliernab. I agree that I can stand to simplify the higher poly models I download from the 3D warehouse. I’ll be more persistent in doing so, as it will certainly help. The issue still persists, though, when an object, even a low poly one, is far enough away from the camera. This must be because the faces, when far from the camera, are perceived by Sketchup’s exporter to be very small.

That said, I notice something that helps: exporting only one object at a time. Sketchup seems to have more difficulty exporting all faces when an object is far away from the camera. So exporting fewer objects (and thus, fewer faces) helps to ensure more/most of the faces are exported.

3dwarehouse models can be really good, but always look at them with the perspective of what you need to export in the end.

In your case, you’ll realise that handmade simplified models will do. Look at the red lights, in the end, after exporting in pdf, the only ones we see are the ones facing us directly, so why even bother to make a small dome - a simple coloured disc would have the same result. same with reducing the number of segments in an arc / circle. 70ft away, in the background, you won’t see a major difference, but SU will.

Sketchup seems to have more difficulty exporting all faces when an object is far away from the camera.

hm. you could try (using tag?) exporting foreground and background objects separately and then simply putting one file on top of the other in illustrator. If it solves all your issues, it’s worth the extra minutes.

Thanks. What extension(s) do you typically use to simplify geometry?

me ? I generally redraw by hand, because I prefer to start from scratch than try to dig deep into someone else’s work. I re-design stuff next to the complex version, that way I can get dimensions from the complex one, and I can simply visually compare the result. It’s easier than restarting from 0.

I’ve seen extensions that can simplify geometry, but no name comes to mind right now, Dave might have better ideas. Artisan tools maybe, or something by TT?

Turns out Mihai proposed extensions in another topic this morning. I’m linking their message here for you @amckeag

Use an extension for geometry simplification: Universal Importer Transmutr Skimp or you can search for others (Google).

The first one is for importation only, the other two have a price, but can reduce polygon count of a model (and you can choose how much they reduce)

first one is free, other two have a price, and trial versions. They apparently have a graphical interface to help you choose how much you want to reduce poly count. first one don’t.