I made this woodworking themed animation using Fredo6 animator.
The process of animating was fun at times and other times frustrating.
I ended up making the video in 17 short chapters (individual videos). That way I could change groups and make new components between videos and if something went wrong while animating, I would only lose max 30 sec of animation.
Overall fun project.

Just curious about what software you used to lace the pieces together and add the text.

Great video. Looks like a lot of work actually. I love planning a notch to clear the radio.

Thank you!
I used PowerDirector 365. Quite easy to learn software. Not free though, costs 60 euros/ year or something.

I was wondering if the friction would be great enough to make the vertical adjustment stepless, have you thought about that? Something like this… 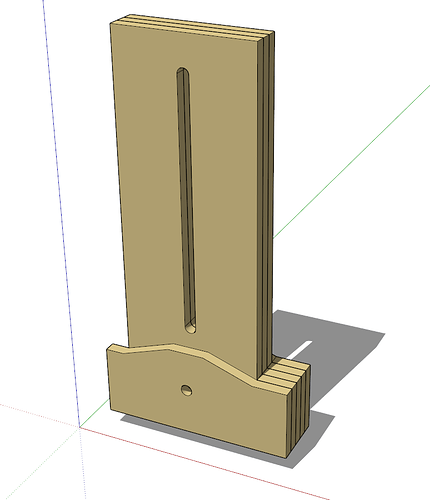 I think friction would be plenty enough in your design and it would be better in many ways.

First I designed a mechanism that used eccentric lever for tightening (I didn’t design it far enough so I could share it). That design was also stepless. Then I thought that the mechanism was too complex for its purpose.
Stepped design have also a benefit that it has it’s own holes for different purposes: hole for use as band saw outfeed support and another hole when used with planer for example. Allthough in your design you could use just a simple pencil marking as a reference just as well.

Hello!
I have new animated woodworking videos to share with you.
I’ve had to stay home for a long time now because of health issues of mine, so I’ve spent some time in my virtual workshop, instead of the real one. Here’s what I’ve doodled:

In this video, I wanted to demonstrate the oscillating washing mechanism that I came up with. I think it’s a funny concept, although I’m not sure how well it would operate in real life.
First I tried animating the machine with MSPhysics - plugin, but I didn’t get it to work right, likely because I had no prior experience in using the plugin (I have to try animating something easier next time). Fredo6 Animator worked well enough for animating the whole video.
The video ended up being a bit too slow-paced for my liking, so I tried to speed up in my following videos.

I use a sharpening jig to sharpen my chisels and plane irons.

Setting a blade in one of these has always bothered me because it is too slow and cumbersome.
Sharpening with my jig design would not require the blade to be attached to the jig,
so using it would be faster and angle adjustment is easier.

I would make a few changes to the model before making a prototype. Some holes in the plywood parts are too close to the edge of the plywood and I would consider adding a magnet strip on the face of the chisel rest plywood. The magnet would help at keeping the blade in place while sharpening.

The idea for the video came from the fact that the nice-looking workbench that appears in my videos is not my model, I downloaded it from 3DWarehouse.
So I set myself a challenge to design my own. I wanted it to be height adjustable and that the “controls” would be on the front of the bench.
It is maybe a bit odd in design, but I think it fills its purpose at least as my virtual workshop workbench.

The one-second rubber mat installation scene was animated in stop-motion:
I made 20 copies of the mat and bent those copies in incremental steps using TrueBend- extension. 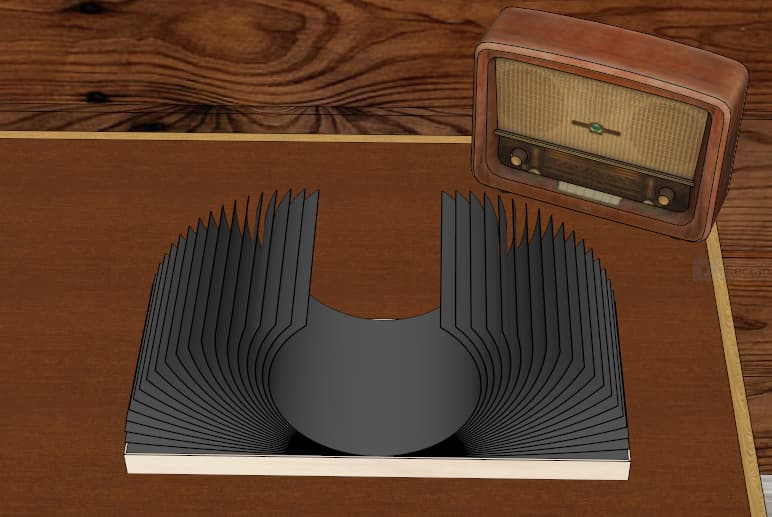 rubber flower.PNG772×517 40.8 KB
Then I took a photo of each bent mat individually and exported them to video editing software, where I stitched the photos together.

The ‘MacPaint 1.4’ frame and the smoke effect were added in video editing.

Animating this video was a bit overwhelming because the model had so many components to move around in it. In the next project, I will probably settle for a simpler design.

Here is a link for my models, if you want to play with them: 3DWarehouse/ Olli
I’ll be happy to hear what would you do differently in model design or in video editing etc.
Have a nice day!