i am tesing sketchup and i wanna modelling an dovetail like this one: http://www.lohn-abbund.de/bilder/schwalbenschwanz.jpg

I tested varios things but i dont get the bevelled edge like in the original picture. My status is this: http://prntscr.com/diewml

Do you have an idea, how i can model this?

Thank you very much!!

Draw the profile of the dovetail on the top surface and use Follow Me to sweep it around the tenon. I’ll make an example for you. Hold the phone.

On the left is a tenon with the bottom rounded and the profile of the dovetail “cutter” on the top.
On the right, I selected the U-shaped edge of the tenon, got Follow Me and clicked on the triangle. There’ll be a few unneeded edges to erase on the shoulder of the piece but that’s all there is to creating it.

And here’s the socket. This assumes the two parts are in place as they’d be in the finished model. I made the two parts components so they won’t stick together.

Screenshot - 12_12_2016 , 5_35_40 AM.png598×733 27.6 KB
Hide the rail getting the socket. Open the dovetailed rail component for editing. Select the end of the dovetail and the side surfaces along with their edges. Hit Edit>Copy or it’s keyboard shortcut. Close the component and unhide the other component.

Amaziing. Thank you very much! How do you draw the u-shaped?

I make this steps: first i draw two line: http://prntscr.com/difezi

And then the two point bow.

But then i get two lines: http://prntscr.com/diffgi

How do you do the smooth U-Shape?

I get it. Sorry and THANK YOU very much!!! 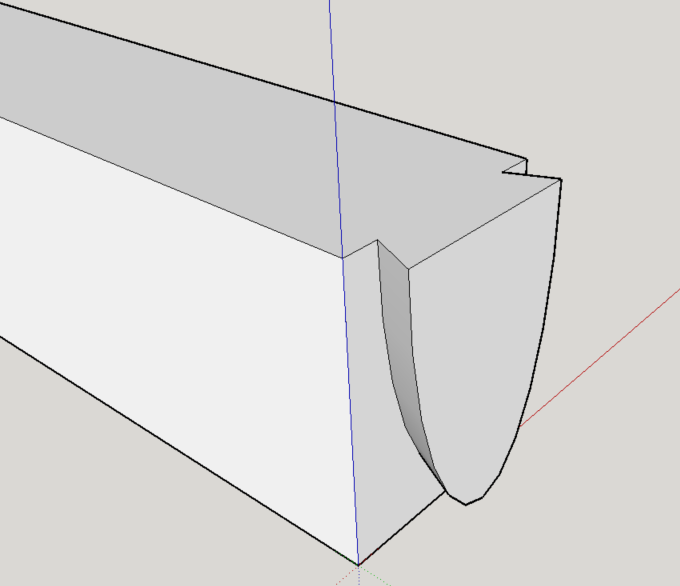 I drew a rectangular tenon and then used the 2-Point Arc tool to draw the curve at the bottom. I made the arc a half circle and then, while holding Ctrl (Option on Mac) I clicked on the edges with the Eraser tool to soften the edges.

Does this dovetail allow some tolerance in the cutting? seems not, any idea how to make a socket slightly larger so that it fits even if cut of material is not really perfect?

Does this dovetail allow some tolerance in the cutting? seems not, any idea how to make a socket slightly larger so that it fits even if cut of material is not really perfect?

Are you referring to the sliding dovetail I drew? It’s a very common joint. Sometimes cut as a tapered sliding dovetail which prevents it coming up tight until it just slides home. They aren’t very difficult to cut and generally the socket will wind up just large enough from running the cutter in and back out. If it’s still too tight, however, it’s easy enough to move the tool over very slightly to open up the socket.

any idea how to make a socket slightly larger so that it fits even if cut of material is not really perfect?

Hi thanks for the quick reply. I should say I want to employ this in the context of 3D printing, so “cutter” means printer in my case and would be much nicer to get it right at first shot.

It’s my first day with SketchUp, so I just know what Push Pull does, but I am not sure I know what is “joint” push pull … what’s that?

Yes, you should have mentioned that in the first place. You can model the socket slightly larger than the tail. Exactly how much will depend upon the printer and the material. How much tolerance do you need to allow for parts to fit together? Might be easier to sand the tail to fit into the socket.

Hi, I will look into “joint push pull”, it might be the tool for my present task (cutting a side of a box such that it can be slided in to close the box).

As of now, these are my 2 cts … I have had some success with push-pull like in the picture I made a rectangle, extruded to a box, then drawn a dovetail shape on top (with some thickness to be fine with the printer, hopefully) and then copied and pasted twice, then used push pull to remove on piece on one copy and again to remove the second piece on the second copy

This seems not to work for a extruded box with thickness … I will look into it tomorrow.

but I am not sure I know what is “joint” push pull … what’s that?

Joint Push Pull is an extension by Fredo6 (there are currently two versions: “classical” and “interactive”). It requires LibFredo6 to also be installed. So far as I know, JPP is not available from the Extension Warehouse, but is in the SketchUcation Plugin store. It is free.