I understand this is only an exercise but what a nightmare.
Even the plugin cut a valley too short.
I hate it when that happens.

I’ve uploaded a corrected model. Thank-you for pointing this one out.

You are correct though these complex roofs are a whole new beast. I’m pretty sure they can be coded though, if I can draw it manually then I can code it

If you really want a headache try and truss out this same roof outline:

After about 45 minutes I’ve given up, not because it can’t be done but because the amount of custom truss profiles and manual editing required far exceeds my patience and determination.

It looks like there’s something amiss with the valley rafter seat cuts as well.
I hope you don’t see this as nit picking, but just another set of eyes on a finished product.

The valley rafters were created manually by borrowing one of the hip rafters, hence the birdsmouth cut is not quite right. I’m not going to fix them all since I’m mostly interested in examining the saddle and the framing around that feature. However, the code will need to address this and make sure the seat cuts in all rafters are correct.

Good catch. At least someone is paying attention.

Needing a break from the rigors of the straight skeleton code I realized that I have still not implemented the octagon hip roof yet. On a related note the circular roof could also use my attention: 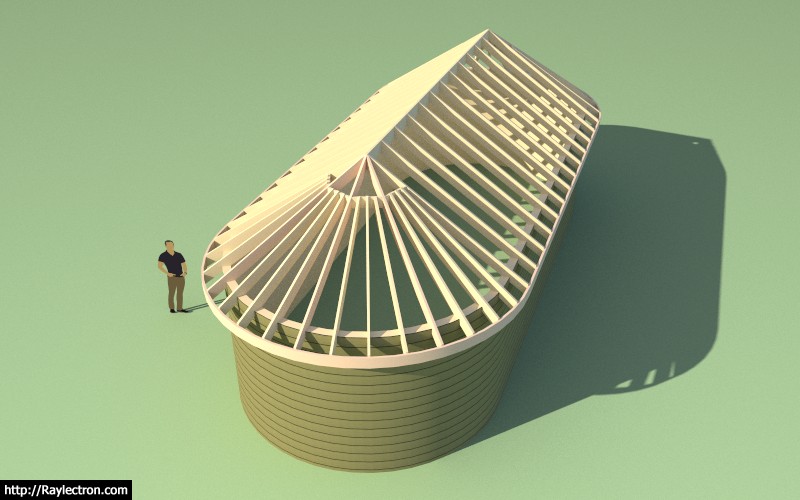 People do actually build these things: 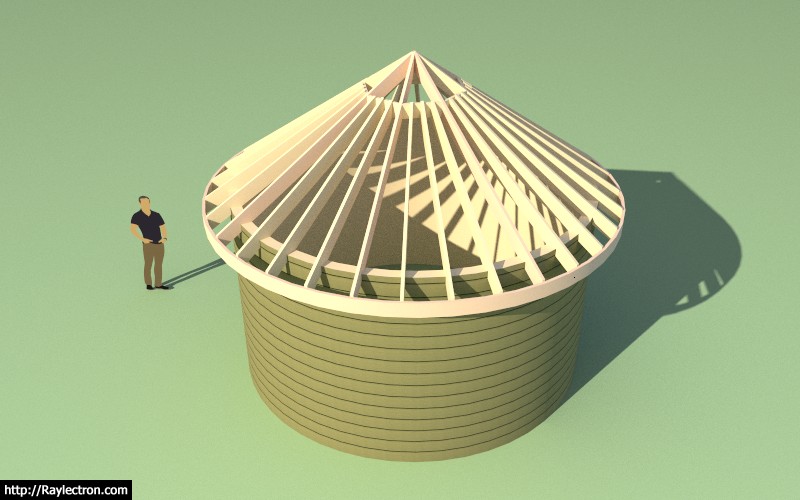 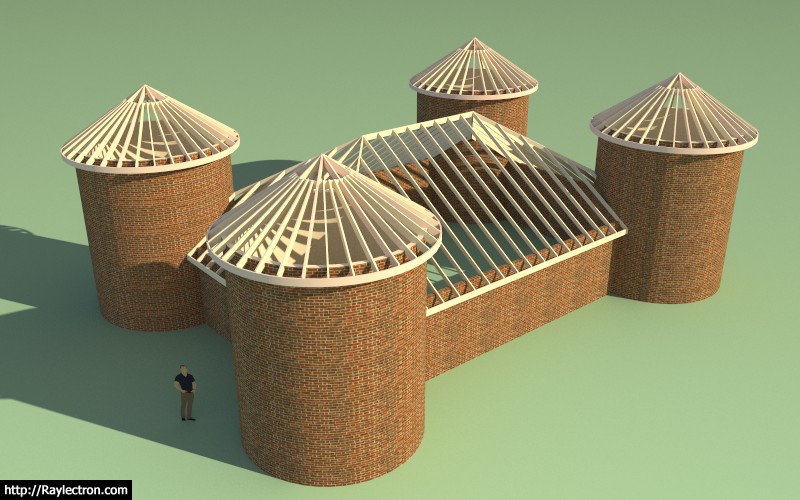 Working on adding in the inset floor joists per the details given by dpaul:

Parameters are the following:

I’m still waffling on what to do if the hanger option is “yes”. I was considering having the option of selecting one of the many Simpson-Strongtie hangers from a long list of hangers. However, no models exist for the bulk of these hangers and I don’t have the time or data to try and model a bunch of them. Item 5 may not be feasible.

I also have a question on the ledger board option: 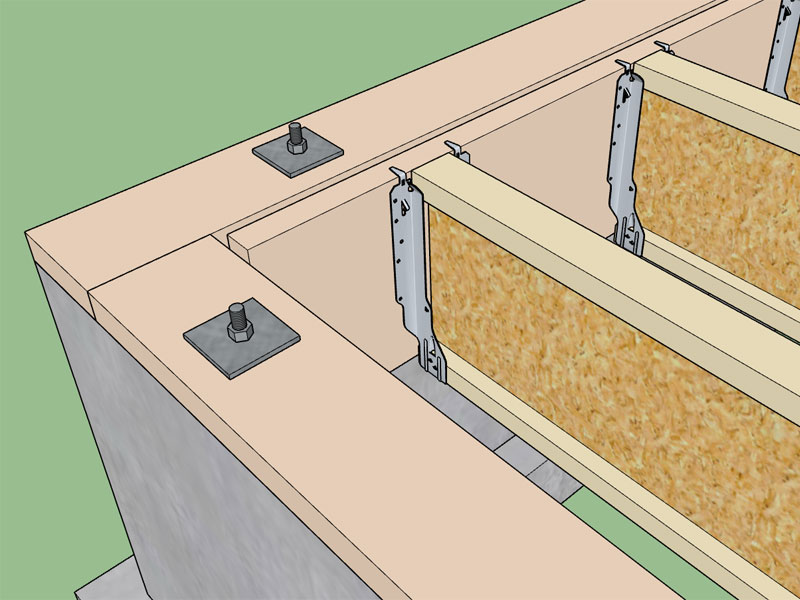 As you can see in the image the 2x12 PT dimensional lumber ledger is smaller in height (11.25") than the 11-7/8" TJI. In this case would the ledger be run flush to the bottom of the TJI or is this not a concern? I was thinking that one would probably call out an LVL or LSL ledger with felt backing between the ledger and the concrete so that the ledger matches the height of the I-joist. Additional information when the floor joists are I-joists or EWP would be helpful here. 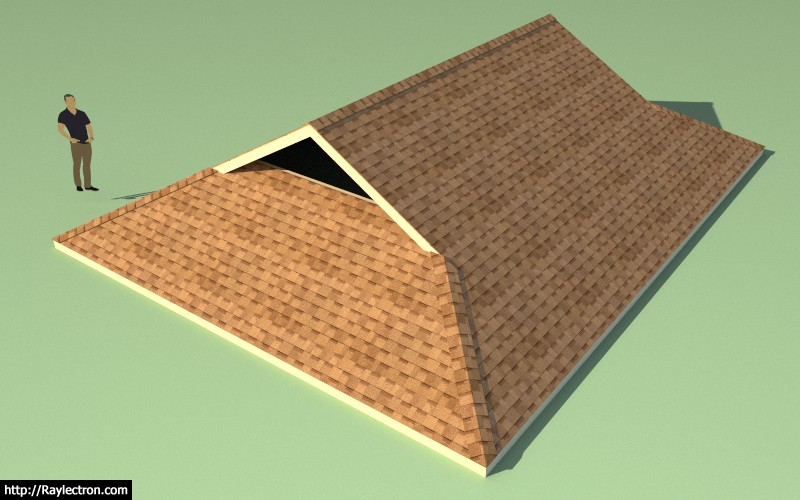 Not exactly how I should terminate the hip cap where it meets the gable section of the roof. What I have now seems reasonable enough for presentation and estimating purposes.

Quite a bit of convoluted code to get those sections of hip cap just right, where there is a will there is a way.

Someone suggested that I try out Patreon: 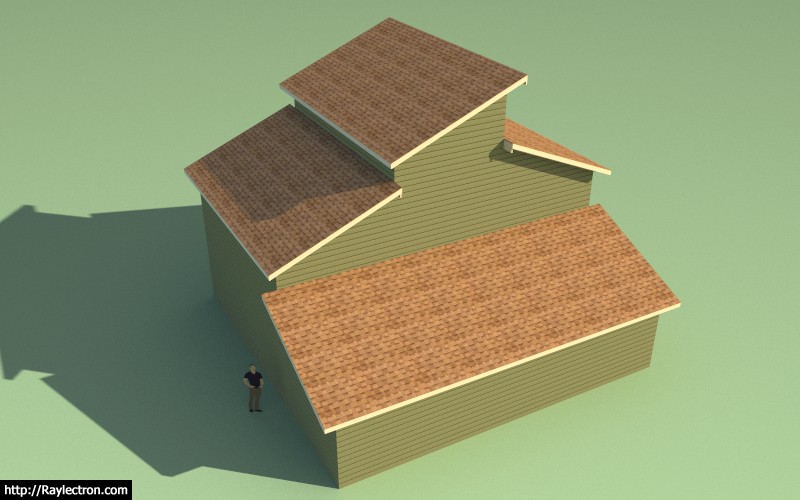 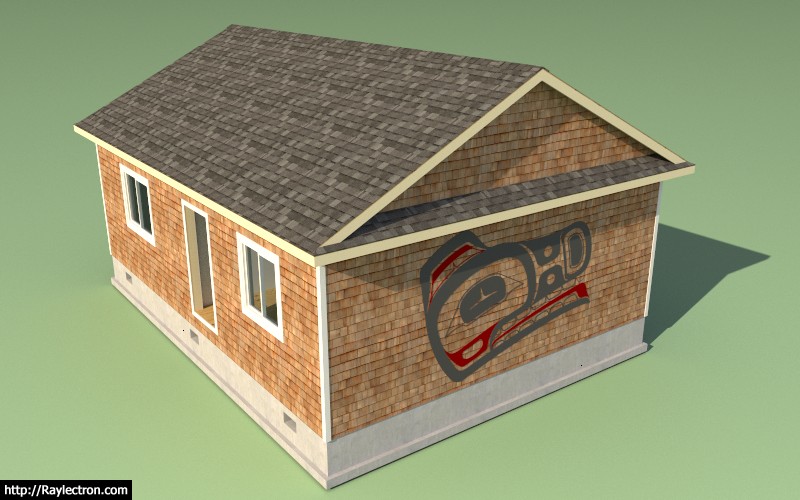 I’m considering selling my plugins and code, I won’t divulge the potential buyer(s) but I have really no idea how much it is worth, I suppose that is purely subjective. If you have a suggestion please feel free to message me. 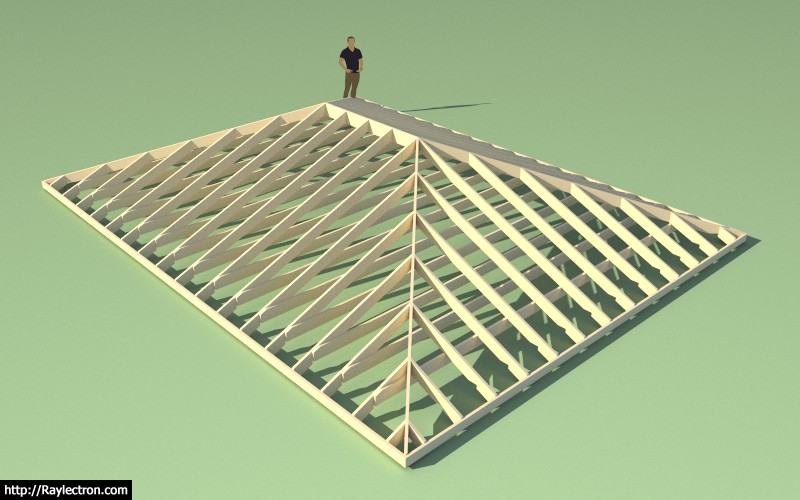 Inset floor joists for sawn lumber and I-joists is now running, (with and without ledger). I will need to test it further and then roll a new revision: 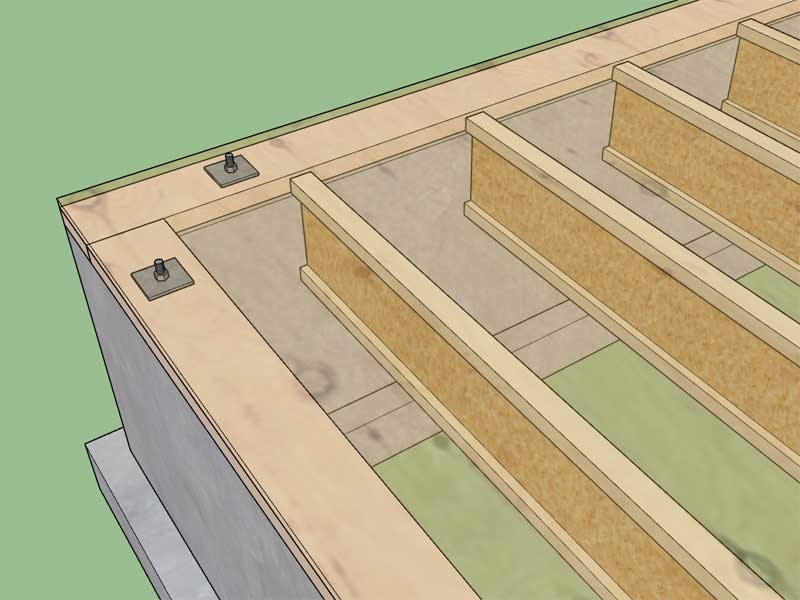 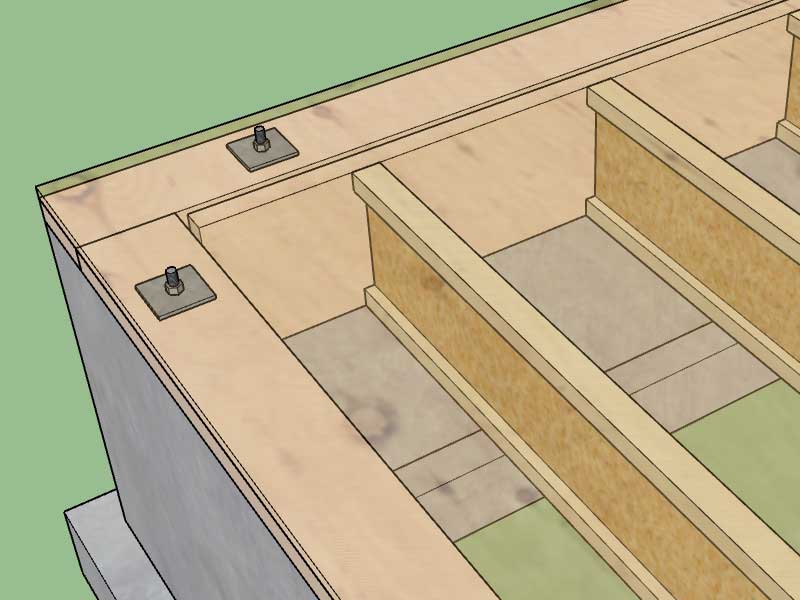 Please be careful who you sell to. I seem to remember a news story of someone who’s app or plugin was bought by someone else for nefarious purposes. Once people trust a piece of software, a new owner can use that existing user base as an unsuspecting pathway onto a bunch of machines.

I just realized that today is the two year anniversary of the Truss Plugin, crazy to think that I’ve already been working on this thing for two years. Progress has been incremental but fairly steady. There are still some big obstacles and goals ahead.

The new inset option also works well if you are using joist pockets in the foundation: 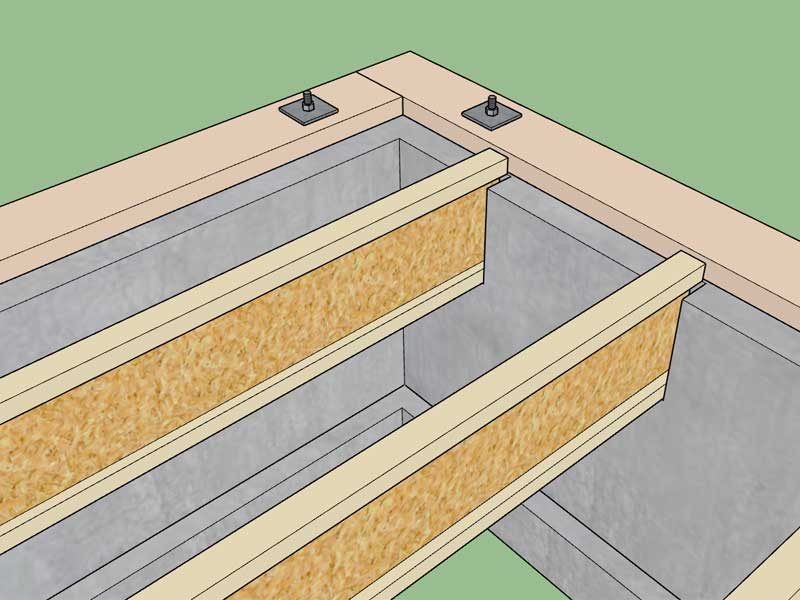 This model was created with the Truss Plugin and the Foundation Plugin. Foundation wall is 8" thick with the pockets set at 2.25" deep and the bearing length of the joists set at 2". The floor sheathing layer is turned off for clarity. 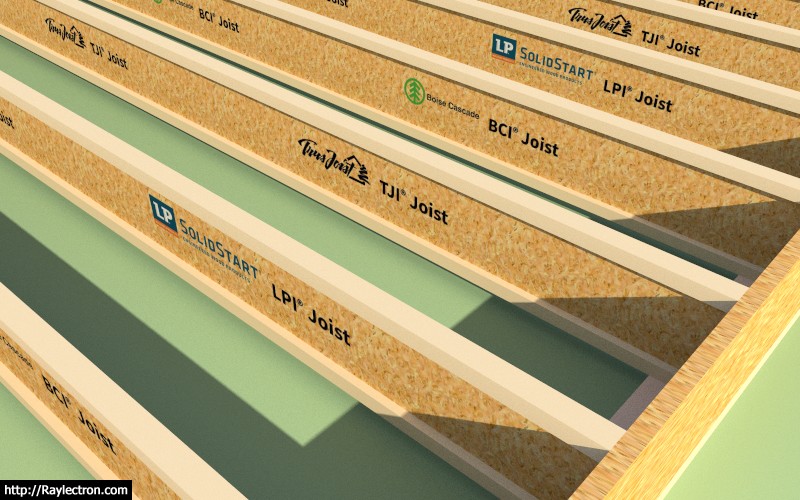 This morning I’ve spent some time reviewing my roadmap and my “todo” list. I’m still working on the straight skeleton implementation, and that is the big one right now. The small upgrades and fixes I’ve released over the last few days have been some low hanging fruit that I’ve gravitated towards to break up my heavier coding sessions. Its rewarding to achieve a few small victories and push them out when your bogged down and progress seems retarded.

The plugin as a whole has quite of bit of functionality but it also is very limited in many respects. This really jumps out at me when I try to model up some recent homes that I did structural work on a few months ago. The biggest issues seem to be:

The list of limitations goes on. The plugin has potential but its certainly a work in progress and far from the polished gemstone it needs to be.

With all that being said I feel like moving my price to $40.00 was and is probably a bit of an over reach. Personally I would not pay that amount for the functionality offered, its too much. I’ve dropped my price back down to $30.00 and the renewal price is now $20.00, hopefully this is more commensurate with the amount of functionality and utility offered.

At some point in the near future when I have fully addressed most if not all of the above issues then I will look at raising the price to its former level.

For those users who purchased the plugin at the $40.00 price I have no problem in extending your license a pro-rated amount. Please feel free to email me with your request for the license extension.