Is it possible to resize only part of a component

I drew this a couple of years ago, with Dave’s help to get the embossed images. Now I need a very similar drawing. The new drawing needs the volcano portion to remain the same, but now the outer wall has to slip into a cup of 20.75 mm diameter. I scaled the whole thing down in my slicer program but of course the volcano portion was scaled down too.
Is there a way to resize this the way I want in Sketchup 2017?
thick strap with symbols for printing.skp (459.8 KB)

The top outside of the volcano is 10mm(10.1 would be OK too). I have used a needle file to get my scaled down version to work but I fear my file work may have weakened the strap across the top of the volcano which is the most important part. I suppose your 101 mm measurement came about because the original was drawn in meters instead of millimeters.

When I opened your file the units were in inches. I changes it to Millimeters to see the diameter as about 101mm. I expect you modeled it in centimeters?

I changed the units to Meters and resised the thing so the top of the volcano is 10 meters in diameter. Since all the circles were exploded I ran Eneroth Auto Weld to fix them up and make them circles again.That step isn’t actually required but it made it so the Dimension tool would show the diameter at the end. As for scaling the outside, I set up intersecting guides at the required radius and then selected the outer part of the thing, go Scale, and using Ctrl to Scale About Center with a corner side handle, scaled the selection down.

I’ll give that a try on the weekend and let you know how it went. Thanks for the guidance.

I thought the question sounded interesting so I took a look. Having viewed your well-built model, I’m afraid I couldn’t find any volcano in it.

I did find a circular-plan object that is 234mm in diameter though. 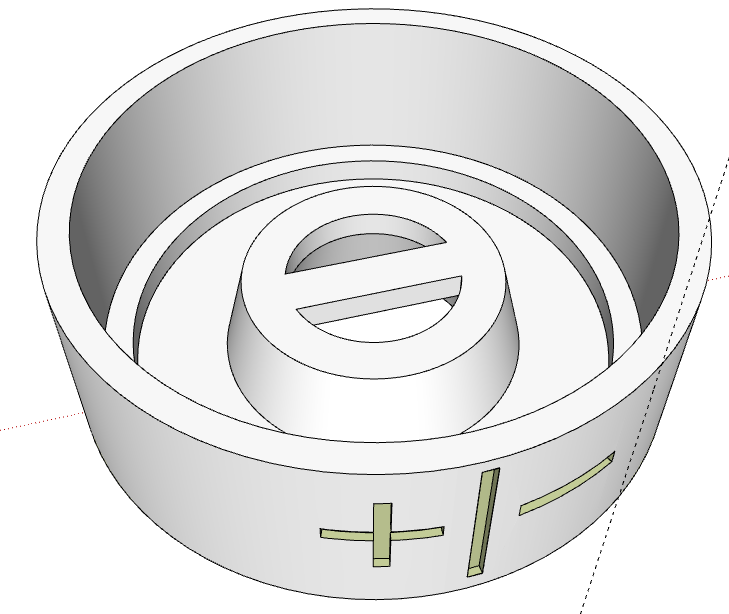 I can’t understand the question. Do you mean you want to shrink the whole object to 20.75mm?

I can’t understand the question.

My GIF should make it clear what Terry wants to do.

Good work Dave. I think you both solved his problem and my confusion.

Good news is that I was able to get Eneroth’s auto weld installed on my desktop computer and that is great for making circles continuous. The other good news is I am almost able to do it with your suggestion. By the way, is it possible for me to slow down the gif? I’d like to step through it slowly but it’s too fast for me.
Lastly, here is my last attempt, almost there, but I messed something up with the scaling and my bottom ended up cone shaped instead of flat.
Pfaff 30 flange v1.skp (489.6 KB)

It looks like you had a little too much in your selection set which accounts for the bottom.

As for the GIF, I suppose it could be slowed down somehow but I don’t know how.

Watch for a PM.

As for the GIF

With the help of Dave and Mihai, I’m almost there. It’s a solid component (everything shiny), but if I look at it in x-ray, the internal structure looks a little weird.
Pfaff 30 flange v2.stl (966.9 KB)