I need more tools above canvas , BUT

What tools do you think you need?

On Mac you get one row of tools across the top. You can go to the View menu and customize the tool palette. Drag whatever tools you want to the top bar. You can also display various tool palettes which you can position where you’d like on the screen.

SketchUp is different on Mac and PC so if you’ve seen images from SketchUp on Windows, you might have seen more rows of tools. Mine has two rows across the top. 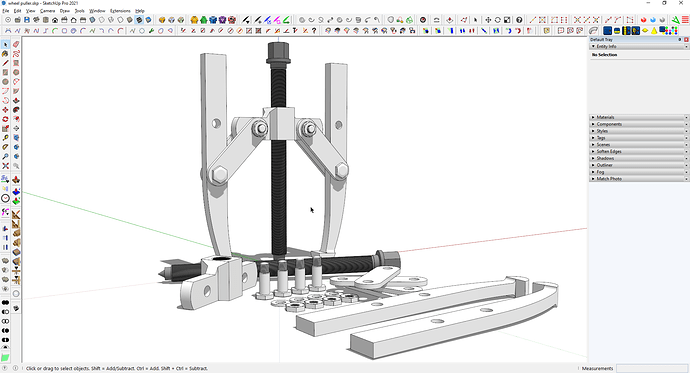 I use Mac - always have and yes I want it just like that you show and it works on version 2017 Make?

As I wrote, I show SketchUp on Windows which allows for multiple rows of tools across the top. On Mac you can only have one row although you can add floating tool palettes below that top row if you wish.

are you one mac or pc

As I’ve written twice, I’m working on Windows, not Mac. They are different.

There have been requests for multiple rows of tools in the top row on Mac but it isn’t currently an option. It is extremely unlikely to ever be an option for 2017 Make since 2017 Make is an unsupported version.

You could switch to Windows.

I find that the only acceptable setup on Desktop/Mac is to remove all the native tools from the toolbar, because I use hotkeys for those anyway, and put my desired extension tools in their place. That still leaves me wrestling with the horrid non-scrollable side-windows UI…

Those windows are scrollable, but unless you set the Show Scroll Bars policy on System Preferences->General, they don’t appear until you attempt to scroll the window. I have it set to Always because like many people, I assume a panel isn’t scrollable if I don’t see scrollbars!

right, I meant the stack as a whole being “unscrollable,” so windows that get pushed down off the screen are difficult to access without deciding what to close. I’ve been spending the morning in Blender trying to crash course making pillows and even on my 13" display it’s like,

this is how a sidebar should be

Ah, I see. In SketchUp they are a suite of independent palettes that happen to snap together vertically. They shove each other aside as needed but don’t seem to have any identity as a unified whole that could scroll.

Judging by some other programs, the palettes seem like something SketchUp could fix to be more like the windows version (did I say that?). But the toolbar seems to be a Mac OS thing.
Yet some programs like Excel make their own top bar with extra rows and their own arrangement–whether this can be done to accommodate custom tool icon setup IDK.

There’s a valid UX question of whether to depart from the conventional look and feel or to stick with convention so it is as familiar as possible to users.

That’s a good point, but when you talk about the poorly functioning Apple color picker (as it works in SketchUp anywa). it’s seems like an academic question. i.e. you may take a position on principle but the interface still needs help.

No argument from me. I’m a long-standing member of the “fix the Materials (aka “Colors”) window on Mac” club. There’s a fundamental semantic clash that results from mixing the concepts of color and SketchUp material in a single UI.

It seems to infect hotkeys as well. Sometimes my custom hotkeys for Entity Info and Materials work in Desktop and sometimes I have to use Shift+⌘+C and ⌘+I instead. Because Get Info.

The worst is that these floating palette Mac apps - that’s the better term - GIMP, Clip Studio - whatever API they’re using, they’re buggy with Mission Control, they’re a pain to move to second displays - if you use Assign to This Display you break Full Screen - pop-up menus hide in who knows which Space…

thank you all for all the input -I can understand that I have to live with it and learn the shortcuts or install windows in the mac . I think I will try to live with it as it is. As long as I can get the tools that I need to work for my - they also are giving me a hard time. A good Bezier tool is aparently har to find. I try to use Fredolib6. happy new year guys!

small question! are these the same as I have not found the BZ spline yet - the looks alike