How did you start using SketchUp?

In search of the best software for landscape visualization, I came across an article on the Applet3d website, where I found a link to SketchUp, which was the first in the ranking, so I chose it. I do not regret my choice, as SketchUp solved my tasks 100%

How did you get started with SketchUp?

In the early 2000s, I wanted to design and make the kitchen and hall furniture for my new apartment myself.
That’s when I found SketchUp, owned by @Last Software at that time… with the slogan “3D for everyone”.

Since 1999 i am an AutoCAD draughtsman in various fields and using google earth and maps a lot for my work. In 2006/2007 Google announced Sketchup 6, a free downloadable 3d content creator. Which i initially used to create simple 3d models of buildings to display in google earth and maps, but soon started to model interior design for personal home improvements, and started to use the program for all kinds of designs, 2d and 3d. Anno 2020 started to use sketchup pro at the office to create sunshade studies for renovation and new construction projects.

A colleague stumbled on SketchUp somewhere in the Internet in 2003 and told me to take a look at it. I did, and less than 15 minutes into the 8 hour trial I knew this was a must-have.

In 2019 my employer introduced me to it, then said, “Learn more about it - keep up with the changes”. Imagine a job that is not “Just a job” - that’s what I’ve got since my job includes SketchUp! I started with not knowing anything about 3D software and have found SketchUp to be very intuitive and logical.

In late 2002 I was introduced to it by a fellow woodworker (and one of the first plugin gurus) after he share a sketch he’d made to answer a question on a woodworking forum. I started with SketchUp v.3. I have 3.1 installed and it’s amazing how much different and better SketchUp is now from that version.

I would always check out neat Mac applications, and saw SketchUp when it was version 3. Back then the trial period was 8 hours, not 30 days, and if you only checked it out now and then, 8 hours would last a long time. For me it lasted long enough that version 4 was released, and by the time I had something I wanted to do that justified buying SketchUp, version 5 was coming out.

I mainly did personal interest things with SketchUp, and occasionally made models for game prototypes for work. Really though, I never got paid for using SketchUp until I started working at SketchUp in January 2019!

Poorly at first. Then with practice a bit better.

SketchUp was mentioned to me by a landscape designer as free software that I could use to learn to do landscape design myself. In the winter months, when it is cold and snowy where I live, I put aside time to learn and practice new things. So, in 2017 (if I recall) I discovered that I could open point clouds in SketchUp using the Undet plugin and that SketchUp Viewer for HoloLens could open SU models in AR. I got a commercial drone license and started to fly jobs I was doing. I’d take the drone photos, make point cloud models, bring them into SketchUp and then draw houses and/or landscape features which I could then open in SketchUp Viewer for HoloLens. The downside is I’ve become anti-paper when it comes to plans. 3D, please ;^)!

I jumped right in and used the learn-as-you-go approach. I now know that I would have been better off having done tutorials first and learning the fundamentals of the software first. Whoops.

First saw it at a trade show (MacWorld Expo or AEC Expo) in 2003 at the Javits Center in New York. As mentioned in another thread, I had been using Alias Upfront for 10 years before that, and it clearly wasn’t being developed any further, so I needed a replacement. When they showed me dragging a section plane through a model in real time, that blew my mind and I bought it on the spot.

“3D for everyone” and i am one of that “everyone”

When i was at the university on economy - business management, two lanscape architect was my neighbour, they were using 3dsmax and i liked what they were doing… I want them to teach the program to me and one of them said there is a simple 3d program for beginners, that was sketchup… It was 2003 or 2004… I use it for a year, drew the house i was in and quit… After the scool, i had a lot of free time and i remember sketchup, it was 2011 i think… I use it for hobby, learn and teach, one day somebody want me to draw for money, i bought a licence, skp 2018 and did some work… But %90 of my works are still for fun…

In 2007, I edited an article in Fine Woodworking magazine, by Tim Killen, that explained what SketrchUp was and what it could do. I began using it almost immediately, and my T-square and triangle have been gathering dust ever since.
Tim and Dave Richards also began the “Design.Click.Build” blog for the magazine about that same time, and they’re still going at it.

Early in the year of 2021, my brothers and I, having built decks, large additions, house remodels, joining buildings together, were asked by a friend in Michigan if we could build him a house.

Having zero experience looking at drawings, much less creating them, and being very new to construction in general, I had started looking into a cheap solution to start fiddling with CAD so we could have something to look at while we were building. I had looked at free cad, and pretty much immediately shunned autocad ($$$) but when I stumbled upon SketchUp after some research, and hearing what it could do, I began my 30 day trial of pro and started running through the courses at learn.sketchup.com .

We bought it pretty quickly and before I discovered the joy of extensions, I began stick framing the whole house one component at a time. But then I discovered a set of @medeek 's tools and was mind blown to tick a few boxes, click here and there, and BOOM, I had a fully framed wall that I could just click correctly framed windows and doors into in an instant

Thanks to the guiding hand of Jesus, we found SketchUp, the very helpful users of the forum, Nathaniel’s tools, we built our first home, and are one our way to finishing our second. 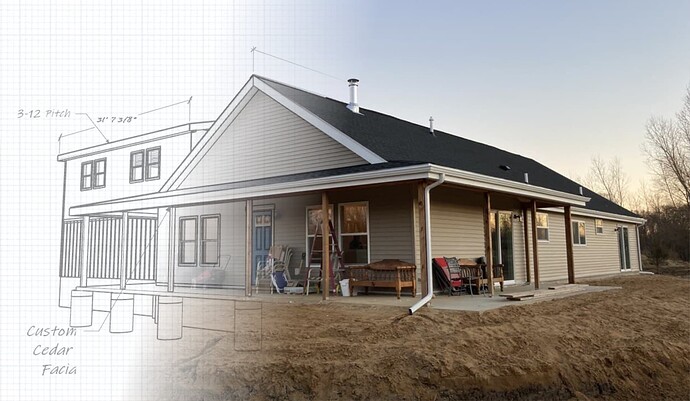 I had forgotten what exhibit that was but I remember walking buy and seeing a kid start working on a model with PUSH PULL and when I came back around he had a full massed building with windows and door openings and everyone was orbiting around there models so effortlessly. Sold on it then, but still needed ACAD outputting 2D Scaled Drawings. Very Impressed when I saw the John Bacus Presentation Building a Presentation from Start to Finish with LayOut - YouTube but Printed Line types, Line weights, and Dimensions were difficult to justify next to ACAD output. Then the Pandemic Hit and we looked at the Development of Sketchup and Layout and found a great Community and a lot of Youtube tutorials, so here we are. LAYOUT IS KEY NOW!

I had just set myself up as a carpenter and furniture designer.
I had learned this trade by drawing on large sheets of paper, with different colors to visualize the different views.
Sometimes I had to make perspective views for customers. But it was always laborious.

One day, in 2008, a client asked me to design new stools and tables for a beer bar franchise. More importantly, he wanted me to make views with table and stool sets to see how they looked. It was more than I could draw on paper.
So I started looking for 3D software to help me. At that time I had a small MacBook and a slow internet connection. I quickly discovered that sketchup was probably the easiest to learn. And that there was also a free version, which was decisive because I didn’t have much money at that time.
I downloaded it, I tried it. I wanted a result right away, in an hour or tonight at the latest. I didn’t succeed, I couldn’t understand it. I was disappointed. I closed the MacBook.
But I had to do it. I reopened the MacBook the next day, I also found a pdf document of 400 pages to learn Sketchup and that Google took care to translate into French. So little by little I understood the software.
Drawing a stool with curves, inclined legs and all that, it was not so obvious at first. My client was enthusiastic when he saw my visuals.

Then I showed it to some colleagues. They wanted to learn sketchup as well. They asked me if I didn’t want to be a trainer. At first I said no. Then I thought that by working well with the .pdf provided by google I could gain expertise and acquire good practices. When I became comfortable, I agreed to become an occasional trainer. This allowed me to learn a lot more about this great software.