I have noticed an issue with the export stl free extension from the warehouse.

Anytime i export the stl file, and select mm as my units, it never exports to the correct size. I just tried it out and it has exported a part about 7 meters in size, rather than the size it is supposed to be. It also did not do it in a scale that is easy to use. I scaled it down by the scale factor from meters to mm and its stil giant. I had my slicer auto scale it and its still the wrong size…

I even set the model units to mm and it still does not export correctly.

Why are you using the extension?

Did you scale the definition of the component after scaling down?

yes i did, and it still wont export… I used to use the extension because i was informed that SU does not have a stl export option…

however, looking under export just now… i see that they do… when was that added?

Ill scale my giant hand down to the appropriate size and try with the built in stl exporter.

Setting model units to something else doesn’t scale your model, it’s a display thing

when was that added?

That method used to work but it does not anymore. I tried it today, last month, and many other times but for whatever reason, when i import it into my slicer it says “model is to large, do you want to auofit to the bed?” it does not give me the option to scale to mm. If i do not autofit to the bed its giant and if i use the scale tool to scale it to mm, i run into another issue.

That method used to work but it does not anymore.

You must have missed a step, SketchUp 2020 didn’t change…

Are you exporting the stl with units set to meters? The stl file has no units so if you export at the same same units you used for modeling, and import into the slicer in millimeters it should be the correct size.

“That method used to work but it does not anymore. I tried it today, last month, and many other times but for whatever reason, when i import it into my slicer it says “model is to large, do you want to auofit to the bed?” it does not give me the option to scale to mm. If i do not autofit to the bed its giant and if i use the scale tool to scale it to mm, i run into another issue.”

its not a SU issue for sure. SU is exporting to meters as i have set it up to do

should be, but its not. STL files are unitless as you say, but for whatever reason, when i export it as meters, and import it into my slicer i get this message:

in the settings of my slicer, i do not have any options to auto scale to mm

when i hit yes, it scales it to the size of the 400mm print bed haha

haha, best thing i have heard all day. thats a new quote for the wall

Yes sir:) If you know the trick to make it work, that would be great. I originally thought it was SU until everything i did was not working in my slicer… So i am guessing its my slicer. I really like ideamaker because they have alot of options and i get better prints than cura. BUT THIS ONE ISSUE SUCKS!!!

Iam leaving for a bit. i will return. thank you all. ill reply when i can:)

Sorry, can’t help you with that.
I even tried to Google “Ideamaker import setting” but get redirected on their site…

Sounds like you need to do some trial and error experimenting to determine what your default slicer import units are, unless you can find the documentation. Maybe make a 1m cube and export with various units from SU, see which one comes in as 1mm cube. My guess is that the default import unit is MM, it should be.

Note that this is not the same as the export units in SketchUp. For a 1 M cube, to enter the slicer at 1mm, you would export the model in M, so the face dimension is 1 and import in MM.

For the hand file, I imported .stl in Meters, worked on it in M, exported set to M, and imported with the slicer set to MM. 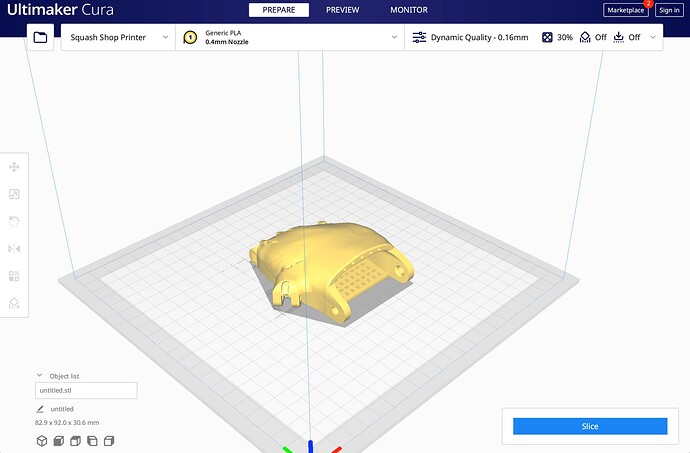 did the cube test and exported as meters. The slicer says its to small and maybe in inches, do you want to convert to mm? i hit yes, and now its 25.4mm rather than 1mm
if i hit no, it brings it in as 1mmx1mmx1mm which is odd because mm is smaller than inches??? 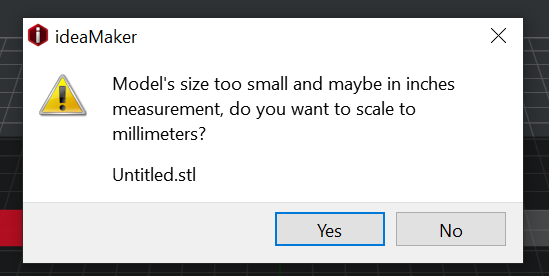 But if you started investing with a 1 meter cube and import it as millimeters it should be 1 mm cube. Maybe the message is confusing but it is apparently possible to make it work.

In your example you were importing a cube with dimensions of 1. Slicer asked to treat the incoming .stl as inches? You say yes so slicer treats the 1 as an inch and brings in a 1” cube. 1”=25.4 mm
Your slicer is being overly cautious about a 1mm cube being too small, which it probably is for any real world printing. Try test again with 100m cube. I bet no message and a 100mm cube.