Everyone Needs a Vise

Veritas Quick-Release Front Vise on the left, Wood River Tail Vise on the right. These will be included in a workbench project that I’m doing plans for in SU and LO.

@john_drivenupthewall oh dear John, editing someone’s spelling like that can be rather dangerous.

I spelled it with an s on purpose and changed it back.

@DaveR should learn to spell…

Mr Webster has a lot to answer for…

John if your vice is to have your nuts in a vise I think you have succeeded.

Now that is a good piece of advice…

Here’s how I used my vises.

This is from the model I drew for the plans I made in LayOut for Chris Gochnour’s traditional workbench. 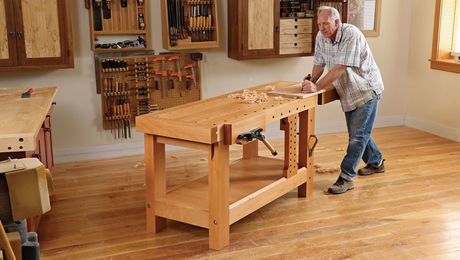 How To Build A Heavy Duty Workbench - FineWoodworking

For Chris Gochnour, the tail vise is the heart of this versatile workbench