Choosing a size from a predefined list of options

I’m attempting my second live component - to create a theatre flat of one of a predefined set of choices for each dimension.

I want to create a live component to draw a flat allowing each dimension of size to be picked from a list of available sizes, and create a box of the specified dimensions.

As a bonus, I’d like to add the ability to input a non-standard dimension that isn’t in the list, but could live without that.

I’ve fallen over at the first hurdle - how to connect a choice node to a box to specify its height, width and depth (z, x and y dimensions).

But I can’t see how to make the connection.

I click on the input button of the number list node, and fill in the float list items with my six choices of height for the flat, in inches.

When I try to connect the value output of the choice node (the index of the chosen item from the list) to the number list, the only choices I am offered are these:

I’ve tried connecting the choice/value output to each of these in turn, and inspected the output of the *number list".

None of the connections work to drive the output, and indeed all I see in the output is <float list> whatever connection I make, and whichever choice value I pick.

Try again with a set number list item node, whose title seems to suggest it would pick one output given an index input.

And find that you can still only have four items in the <float list>. A bug that’s been very recently fixed in the •number list* hasn’t been fixed in this node.

So I’m stuck again at an early stage in developing my second Live Component.

I’ve looked through all the old and new entries in the Training dialogues in Creator, in all three tabs - Intro, Patterns, and Builds, and haven’t seen an example that does what I want to do. Have I missed it?

Or what am I misunderstanding in my efforts to achieve what (it seems to me) should be very simple? Choose one numeric value from a list to drive one dimension of some geometry.

With great help from @simjoubert and @cam_wells_materia in a private message thread, I’ve managed to achieve what I was attempting to do - be able to choose the dimensions of a flat from three separate pre-defined choice lists, with the option of overriding the list by a custom choice of height or width.

Here’s the resultant graph and a link to it. 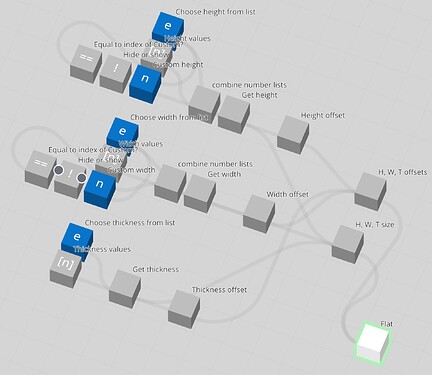 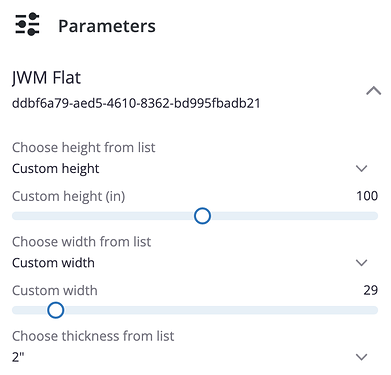 A very big thank you to both of them for their help.

Hope their insights may help others trying to create a similar graph and Live Component.

I’ve uploaded the live component to the 3D Warehouse.

Here’s a link to it.

After downloading it, remember to File/Import the model, not open it (if you just open it, it displays as a group, with no parameters to change its size).

With relatively trivial adaptations, I’ll next convert it to drawing rostra (rectangular boxes for stage use). Just need to change a few names, add a custom third dimension, and change the lists of predefined sizes.

I managed to adapt this to create a rostrum with sizes chosen from a list of common lengths, depths, and heights, with the option of typing in any one or more dimensions not in the list.

Next challenge - how to attach a text description to tell a viewer in SketchUp that it is a rostrum, and show the length, depth and height, and assign a tag of Text to it.

Searching for Text in the Create Node dialogue doesn’t seem to find anything useful, nor does searching for available Live Components, not do any of the tutorial examples in the Creator window.

Any pointers would be welcome.

The nodes you’re looking for are the add attribute and get attribute nodes. These are the operations that allow you to attach metadata to points, primitives, etc.

At the moment SketchUp doesn’t read these attributes yet, but is something we want to implement!