"All Supported Formats" for import 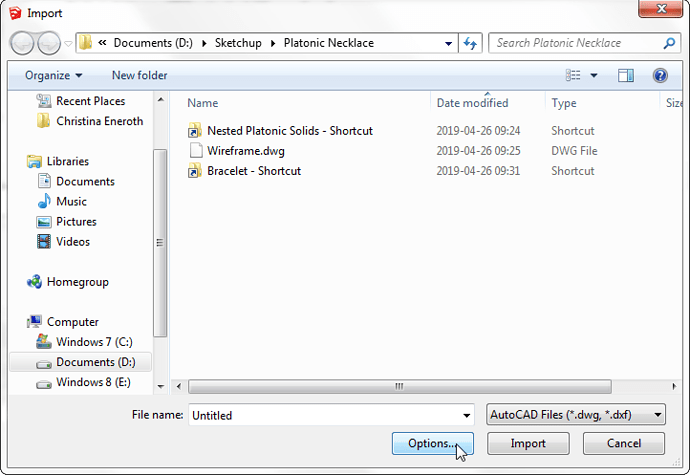 I can’t be the only one thinking it’s really annoying to browse a folder from where you want to import a DWG, not finding it and perhaps even browse another folder, just to realize the format dropdown was set to 3DS or some other format. Not to mention then having to skim through the list in search of the format you are trying to import.

Most import file selectors (all other can think of) has the type option “All Supported Formats”. The one in SketchUp even has an option for “All Supported Images Types”, but not one including 3D models. I think it’s especially strange to miss this feature in SketchUp, which is popular because of intuitive and polished it is.

There are two technical limitations I can think of that can have prevent this option from already being in SketchUp. The first is how to resolve what importer to use if there are two registered importers capable of importing file of the same extension. However, in nearly every single case the user only has one importer for each extension. In the rare/hypothetical situation this isn’t the case SketchUp could display an error message asking the user to manually select importer or fall back to whatever importer was first (or last) loaded. Since the Ruby API has no parameter for selecting importer this issue has probably already been solved, if it even is an issue to begin with.

The other issue is how to handle the Options dialog. The dialog, as well as the existence of such dialog, varies between importers. When the user changes file format in the dropdown, the dialog changes to either have or not have such a button. For some rare importers additional options are even displayed directly in the open dialog.

If changing the selection in the open dialog could change the dialog itself, just as changing the type dropdown does, that would be ideal. However I don’t know if Windows has any exposed event firing for selection change or if there are other technical difficulties. If so All Supported Files could perhaps completely lack the options dialog and instead use options from last time? Or the options dialog could be displayed once the user has clicked Import, in the same flow rather than as a separate action? In my view any of these workarounds are both better than having to go back and forth between manually selected importers all the time.

Edit: When at it, drag and drop import for all supporetd formats, not just SKP and images, would be very, very nice to have.

@sketchupdoug, just wanted to make sure you see this. Feel free to show it to Sandra too; I don’t know her username.

Thanks! This one is certainly one of those small things that will make a big difference!

better a warning (or information) message.

Edit: When at it, drag and drop import for all supporetd formats, not just SKP and images, would be very, very nice to have.

which would impose the question for a possible options dialog too, importing with the defaults of the format w/o being required to show the options dialog could be a fallback.

Importing in the recent document and not i a new document e.g. for adding components by drag’ndrop to an existing model would be preferrable.

better a warning (or information) message.

I think this is a question of naming. If I’m not mistaken warnings and information messages shows some info and proceeds with the action, while an error aborts or cancels it. In this case I think it’s best to say what importer to use couldn’t be resolved (but in a more natural phrasing) and not do anything. Then the user could select an importer in the type dropdown and go with it.

which would impose the question for a possible options dialog too, importing with the defaults of the format w/o being required to show the options dialog could be a fallback.

For importers that has such a dialog it would probably be a good idea to show it here. Since there is no place to have an Options… button it would always show. The good think is that just pressing Enter (or click OK) should let you proceed with the existing options. When thinking of it, displaying this dialog isn’t any more disruptive than creating a component.

Importing in the recent document and not i a new document e.g. for adding components by drag’ndrop to an existing model would be preferrable.

For the importers I have used, importing to an empty model opens the imported file itself while importing to a model with existing objects (e.g. a scale figure) places a component. I’m not sure if this is how the SketchUp Importer interface is implemented or just a convention but in any case I think it’s a predictable and easy to understand behavior.