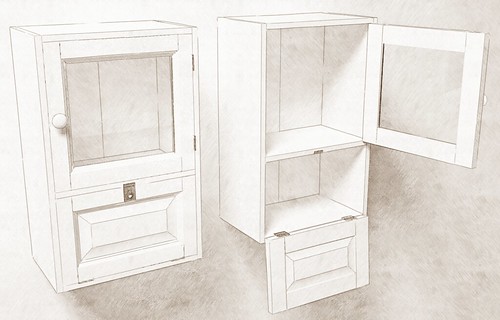 An oldie I came across while looking for something else. This model is based on a cabinet from around 1900 that came out a barbershop in Wisconsin. The raised panel is interesting because it has the same raising on both sides.

One of my sketchy line styles for the edges.

Nice effects, is that a watermark you have in the style?

There’s no watermark. The shading was created through a couple of post process steps. I created a rendered image in Kerkythea and then ran it through FotoSketcher. The resulting image was combined with a sketchy lines-only image. Sounds like a lot more work than it really is.

I thought it were a watermark, but with you I just never know. That is very creative.

Also, if you don’t mind me asking, how do you create the lines for your styles? Do you print off the sheets and scan them or is it some other way? I keep meaning to do some myself…

I’ve printed off the template so I could draw lines by hand and I’ve used a couple of different drawing programs like Corel Painter to create the lines digitally on the Wacom Cintiq.

I would encourage you to give Style Builder a try. One thing to be aware of is when you scan the sheet back, you need it to be exactly the same size as the original image or it screws up the bcode that Style Builder is looking for at the top of the template.

you need it to be exactly the same size

Yeah, I found that one out myself when I tried once

There’s loads of styles pre loaded of course, but I just think that there’s satisfaction in using a style I’ve created myself. I’ll have to get on with it and try it out. SketchUp’s just so awesome that I think Style Builder gets overlooked by a lot of people.

Thanks for the replies, have a good evening.

I agree with you about Style Builder. I think that for most SketchUp users who are creating images from their models, they are more interested in creating photo-realistic renders instead of creating illustrations that have more of a hand drawn look to them. For those folks sketchy edges don’t hold much appeal.

You have a good evening too. Happy New Year!