When are you going to bring SketchUp to Ubuntu?

why developing a desktop application for a server operating system w/ a market share on the desktop of ~1,5%?

Ahummm depends on how much RAM you have I run Sketchup Make 2016 in win 7-1 which is inside of Virtual Box ( added extention and the guest additions ) From what I gather they have no thought of making Liunx version for long time . . I run this on a I3 quad core 2.4 gigahertz CPU Ubuntu 15.10 as base O/S and install virtual Box then install win 7-1 and then add the Extention and Guest additions I have 16 gig of DDR3 of which laptop uses 256 megs for video Windows gets 120 megs and gets to use 2 of the 4 CPU’s also have to make yourself part of the USB in Virtual Box so you have use of all USB ports there also . Linux gets to use the other 130 megs of Video .
I Run Sclic3r for slicing the part up for Repetier-Host to make on my Geeetech I3 Pro C Dual Extruder 3 D Printer in Linux . . You have to add a folder on the desk top for Linux and windows to share and add the folder in virtual Box for the hared folder . . I do the 3D printing from Linux and the making of the part in SketchUp Make . . And with guest additions you can stretch out the Window of Windows to where it is about most of the screen like this 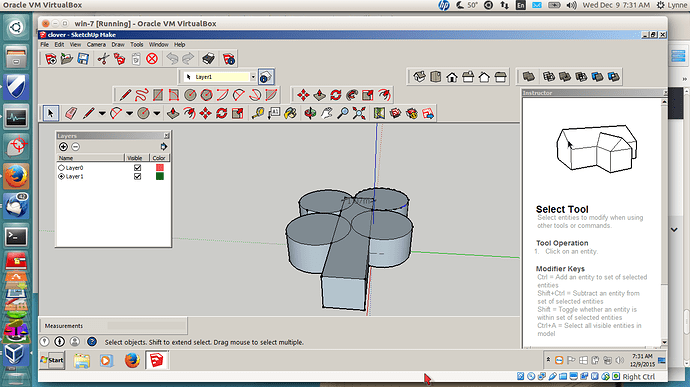 Someone please explain to me what incentive there would be for Trimble to dedicate resources (money and people) to developing a Linux version of SketchUp. The vast majority of people asking for this version aren’t willing to buy SketchUp. They expect to get it for free. If there’s no return on the investment, why redirect resources from areas that do provide a return?

Do you do your work for free? If so, I can probably get you a job.

NOT all things in Ubuntu are free . . And many cost a lot of dollars If you had looked through the Ubuntu Resource Center you would see a lot of software which has to be bought . But you use Windows and try to diswade people from using a better O/S . I use Linux as it 99.9 % safer then any windows thing or O/S made to date … The only Virus / Mal Ware / bots are in Windows Programs and i wander far and wide into the Deep Web, back doors and so on . . So If there were Virus’s for Linux I would have gotten them . .
Linux Is the hackers domain there are no major Virus’s for Linux I tried to get some and it was written for windows so I could not get the virus . . I have bought several programs made for Linux so I could get things done ! . . My anti Virus runs in back ground around 8:00 AM and does it’s thing across the Hard drive ( ONLY THINGS WITH ANY THING IN THEM ARE THE WINDOWS programs and O/S ) . . Quicken which I use for doing my checking account has MALWARE and a Trogen built into it and IF I delete them the program WILL NOT RUN ! SO i QUARANTINE THEM ! . . wIN 7-1 HAS A GOB OF THINGS which Clam AV says are bad parts which I can not delete or windows will not run . . So this stuff which seems to bother all of the windows users with Video and files not working I would say belong to the O/S and its glitches . . I have loaded the Major files which one of the people here says I CAN NOT OPEN OR DO ANY THING WITH IT was totally wrong . .

I never implied that all things for Ubuntu are free. I said the vast majority of people who have requested a version of SketchUp for Linux want it for free. This has nothing to do with viruses or malware. You get off topic easily.

Lynne, are you committing to buying a pro version of SketchUp if it is made for Linux?

Many of your statements are true, but also irrelevant to DaveR’s point and irrelevant to SketchUp. Fixing the malware-laden world of Windows is Microsoft’s problem, not Trimble’s. Merely being in a “cleaner” environment is not a business reason to support a different OS.

Google brought out free SketchUp as a way of luring people to populate Google Earth with user-created buildings, thus drawing attention to GE. More people visiting GE gives Google more info about us, and allows them to increase revenue by selling more ad space. Trimble has no such ulterior cash flow. We are fortunate that they have continued to provide Make for free, as their only possible return on it is from people who decide to upgrade to Pro.

Yes I would . . Minor thing though I have to be making money from the 3D printer so I could pay for it and right now my 3D printer is down for a Heater Block . . Set screw broke inside the heater block when trying to change out the Barrels and Nozzles . . And of course it will not run with ONLY 1 side connected errrrrrrrrrrrr ! Seems some one in their setting things up in the controller set it that way . . So all the things I want to make are on hold for the next few weeks ( Parts come from China of course ) . . Not expensive just waiting for them to arrive arrrrrr guh ! . .
I am living on Social Security ( it is why I got the 3D printer to make money and get life a bit better ) So I am playing with the Sketchup Make 2016 to see how far i can push the 3D printer . . I see there is a Wood PLA filament and it has the temp close to the normal PLA setting for making parts . . As I have a ga zillion Ideals as to things for the printer in Wood and different colours that are there to use 12 pus some glow in the dark Filaments in 4 colours even !
I see you removed the replay you had as I was going to copy and paste a part of it here . . But okay

It is still there if you look in the edits. Click the little yellow pencil top right of the post.
Wouldn’t want you to feel that someone had said something important and then deleted it before you could quote it.

This is the SketchUp forum. SketchUp is officially supported on Windows and Mac OS.

When someone runs into a problem, I see the community taking the time to replicate the problem on their machine to understand the problem and provide a relevant, helpful answer.

If this person runs into technical issues, unfortunately, I am not going to be able to troubleshoot such a setup and help the person have a positive experience. That’s why I recommand running a supported OS.

That’s it. There’s nothing more to it. I just want people to enjoy SketchUp as much as I do.

I spend the rest of my life running Debian and evangelizing Debian when I deem it relevant, but here I suggest SketchUp’s supported OS simply because it just make sense and its easier for everyone.

@augcampos: By the way, just in case this could be helpful to you: Some have had success with the 32bit version of SketchUp 2016 in Wine

I will have to look into this and see if it will run there but still will have to use the Shared folder to swap files back to Linux for the Slic3r to slice up and Repetier-Host to make the part on my 3D printer . . . . I have a folder on the Linux desk top of items I have made so far and things TO MAKE . . Darn its the wait on parts from China that slows things down .
For other running 3D printers read this area below may save you pulling out hair LOL

. Thinking of sticking to PLA filament ONLY as I have had problems with the ABS not being a very controlled size and causing sicking in the feed tubes . to the Heater Blocks where the Extruder Nozzles are screwed into . Using 4 mm size so it gives a stronger part and may go to the 5 mm for future items . . Will know more after a lot of doing on the 3D printer . . Now that I know it was not the Repetier-Host causing the parts to rip loose and will upgrade to the 1.6 plus version again . . Found out that ANY COLD DRAFT will cause parts to dislodge from the bed . . Means building a wall around the printer . . and a base sort of a top open box . .

What I don’t get is why anyone would blame an OS for issues with SU when the “problems” are with the graphics card/chip and it’s driver, plugins, modeling techniques and sometimes browser settings.

I know about the programs you mentioned but they will not import the files I have in quicken or i would have started using them . . I read a gob about things in the Ubuntu Resource Center and wish some would do things I would like to do . .

a lot of information concerning running SU under Linux can be found by the SU Sages.

the amount of interests willing to pay for a native Tux version seems to be pretty low anyhow:

The current price for SketchUp Pro is $695 USD. And then going forward $120 USD for single user Maintenance and Support plan which covers the license for the next pro version when it is released. All this info is on the SketchUp website for you to look at.

the license fee is a one time payment of course, the maintenance a recurrent but optional fee (besides being mandantory for initial purchase).

That is why I have to wait for some of that funny green stuff to arrive LOL Living on Social Security is a joke and getting harder to do . . That is why I got the 3D printer to fill in and allow me to get things here and there as the money got deposited to my account . . All I have right now is OUT GO no INCOME LMAO . . Us old foggies are not rich and I keep trying to have money left over even managed to have $12.00 left from last month to add to this months S.S. check !
The money left in my Bank account NOW is for food for Girl and Rogue my 2 pets . .