I’ve had my trim tool for quite a while now. It is part of the Truss plugin but at some point I would like to split it out and just make it a stand alone plugin/utility (and at no cost to the user). This type of feature should really be part of the basic set of tools in SketchUp in my opinion. Essentially you pick a face (trimming plane) and then you pick an edge or part of the solid that you want to trim off.

It has worked reliably for a while now with only a few minor issues but recently it has come to my knowledge that it actually does not properly trim hollow sections, see image below: 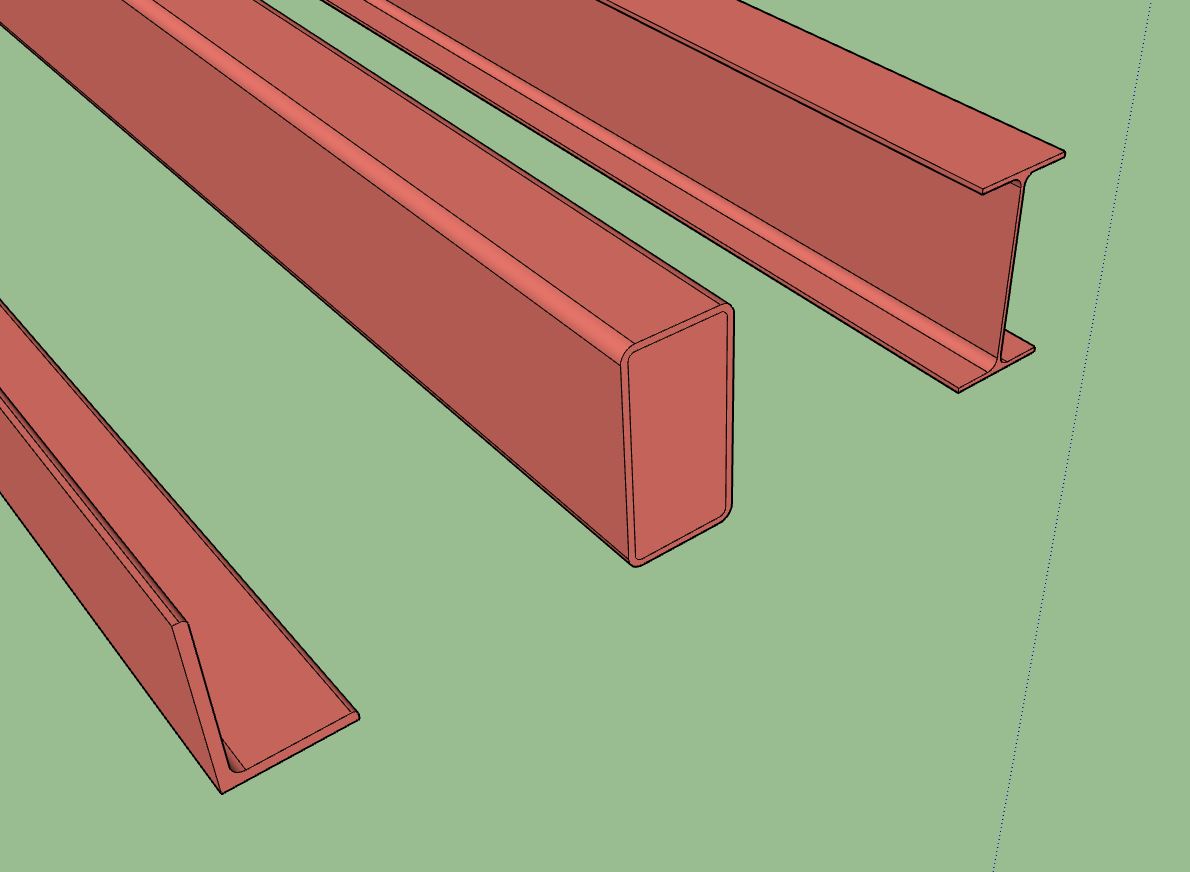 As you can see with a hollow section the algorithm leaves a residual face which renders the entity a non-solid.

Strange that I have not noticed this before but it is probably due to the fact that I’ve primarily been occupied with trimming wood members which are rarely hollow sections like the rectangular steel tube shown.

It has been quite a while since I created this bit of code but here is the trimming method in its entirety:

At this point I am kind of stuck when it comes to dealing with this interior face or possibility of one or more interior faces. I’m throwing this out there since there may exist a simple solution to this problem that I am totally missing. My one idea is to check the trimmed group or component after the operation and check to see if it is still a manifold and then to apply corrective action if it is not.

The difficulties arise with this small chunk of code that is attempting to stitch the solid back together after removing the projecting edges:

Specifically the line that utilizes the find_faces method. This line of code will add faces willy-nilly on the trimming plane with no regard for interior holes. The problem of course is how to know what is an interior hole and what isn’t and where to add the correct face. This has become an interesting problem…

After finding faces, you can delete any face where every edge (of that face) is shared by more than two faces. Yes, that was a goofy sentence. Here’s the code.

I think you are on to something here. This would have never occurred to me.

Rather than looping through all of the faces of the group or component how about limiting it to just the new faces that were created on the trimming plane:

Of course this doesn’t seem to work, I’m trying to check if each face is on the trimming plane (pln).

It would be nice if there was a method for a face to check if it was on a plane (ie. on_plane?)

There is, a face has a plane; you have a plane.
The face’s vertices points can be checked to see if they are on a plane etc…

As an aside why not find the vertices of all of the edges that fall on the ‘wrong’ side of the cutting ‘plane’ and then project each vertex-point perpendicular [or along the main connected ‘edge’ ?] onto the ‘plane’ until it’s then on the plane - you now have the vectors from the vertex-points to the plane as an array - so use entities.transform_by_vectors(vertex_array, vector_array) ?
Class: Sketchup::Entities — SketchUp Ruby API Documentation

Yes, I can do that but then I would have to iterate through all the vertices of a face to check if it is on a plane since some may land on the plane and others not. A face is only on a plane if all its vertices are also on that plane. I was hoping to avoid more computational overhead if possible.

In my code block above I’m trying to check the equivalency of two planes but obviously that does not work. I’m wondering though if anyone has encountered this problem before and what is the solution? (compare two planes for equivalency)

I get it. Now I can see why checking for plane to plane equivalency is a bit complicated. I’m sure there is a simple algorithm though if I think about it hard enough.

I suppose I could just check the normal vector of the face and compare it to the vector that defines the plane but this only establishes if the face is parallel to the plane and not on the actual plane.

You’d be better checking that the face vertices points are on the plane ?
Then checking the face normal and plane normal [and its reverse] for matches…

At this point I think it is too much trouble (overhead) to limit the faces just to the trimming plane.

My final fix is:

Thank-you sWilliams for providing the solution. Again, I would never have figured this one out so concisely, its genius.

A plane consists of a point and a vector, if another plane has the same two properties - then they are ‘equal’.

Not in his case. face#plane returns an array of the 4 plane coefficients as floats.
This means that it is Array#==(other_ary) that does the test.

Equality — Two arrays are equal if they contain the same number of elements and if each element is equal to (according to Object#==) the corresponding element in other_ary .

Returns true only if obj has the same value as float.

But the Ruby API did not override Float#==(obj) …

This means the test will not use SketchUp’s internal tolerance.

To do so, you’d need to convert the floats to the API’s Length class, ie …

Then the first test by Array#== verifys that each have 4 members and then passes each member pairs to Length#==.

This is why I gave up on the face is on plane issue, this stuff is now above my pay grade.

Several of us have said for many years a Geom::Plane class would be beneficial for the API.

It’s good to know that I’m not the first who has come up against this.

and try again in the morning.

Here’s some simplified code to check only the faces on the cutting plane, and a skp file to test against

Hmm, You can make this algorithm run fairly quickly if you only find_faces for the new edges that are created as a result of the intersect_with. To accomplish this we remember the array of Edges before and after the modifications.

This code runs in 100ms on the model below.

EDIT: I edited the code above to remove a flaw in the find_faces line.