I am looking at purchasing Mac Pro 3.0GHZ 25MB with the Dual AMD FirePro D700 graphics processor with 6GB of GDDR5 VRAM. I am a product designer with a graphics background and was brought up on a SE30 25 years ago and never touched a PC. Can someone please give me their advice that this is the best option over than jumping ship. Which I am very nervous in doing so. Ive always woke with Macs so I’m a bit stuck in my ways…
You advice would be greatly appreciated. Kindest regards.

From ChaosGroup help site for Vray for SU:
GPU OpenCL render mode is currently not supported. GPU CUDA is available only for Fermi-, Kepler-, Maxwell- and Pascal- based NVIDIA cards.
https://docs.chaosgroup.com/display/VRAYSKETCHUP/Frequently+Asked+Questions

So doing FirePro won’t give you GPU rendering, you will have only CPU rendering.
The only way for CUDA for you would be buying external GPU+encolsure like in this article: 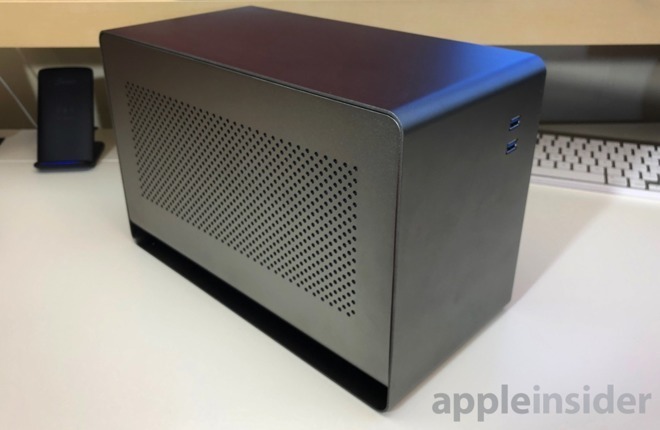 Apple's purge of external GPU enclosures using Thunderbolt and Thunderbolt 2 from macOS High Sierra 10.13.4 has prompted action from the eGPU community, resulting in the creation of scripts that add the compatibility back, plus another that allow for...

Thankyou for that, this is sounding expensive. Certainly now a rethink for what I had in mind, buma. Ill contact them and find out what pricing I’d be looking at would be looking at. Thanks again for your insight.

Okay forgive me, but I’m a creative so lack the technical genius yourself posses. But I’ll put it out there, and now a complete rethink to the solution I’m after. My specific task is for product design within the medical industry for persons with various forms of handicaps (such as myself).
What is the best combined solution using Sketchup and Vray, Macintosh based using the Sonnet’s Thunderbolt 3-interfaced eGFX Breakaway Box to use Nvidia graphics cards. I’m now thinking laptop based for show and tell. I’ve learnt more within the past couple of hours thanks to this four. I very appreciative.

Hi,
for Vray GPU rendering you need Nvidia card. CADs like SolidEdge, PTC, SolidWorks and similar need pro video cards do to optimization done to make them perform without problems when assemblies become big and heavy in those CAD apps. For Sketchup alone, AMD card would do just fine but for Vray GPU rendering you need NVidia card with ‘The most you can pay’ CUDA cores. Problem with mine as many you can pay CUDA cores philosophy is that rest of your computer need to follow that also and price just gets bigger and bigger. Maybe someone with more experience in Apple computers can help you more.

So here is Apple site with external GPUs explanation:

Use an external graphics processor with your Mac

So as I dig some deeper on Mac and Nvidia it seems that is is no go with external GPU because OS won’t recognize Nvidia card. So before you go and spend money on anything you should get some help here from proper Mac users that use rendering with Sketchup and see how and what they use for that purpose.

Maybe try some rendering engine that supports OpenCL.
Something like https://www.thearender.com

Maybe someone with more experience in Apple computers can help you more.

I know @eric-s has a setup with a Mac Pro system, you would wish to get a percentage of the quality he is getting.
The thing is, if you are used to that OS for so long, you’ll better think twice for switching.
I always say that you could learn to love Apple, but learn to hate Windoze…

That said, with upcoming cloud-based solutions for rendering, I would take the ‘lesser’ capability regarding the CUDA’s and profit from the use of use of the OS.
V-Ray User Interface will work for all the OS’s

My set up is currently with the 10-core 32 gb ram Radeon Pro Vega 64 with 16GB of HBM2 memory iMac Pro. It’s lovely. No fan noise, no lag, nothing. Rendering times are about a third of what my top of the line Macbook Pro are.

I don’t have any experience with eGPUs and so can’t speak to those. I do know that on my iMac with VRAY I can choose between CPU, GPU or Hybrid rendering modes. I haven’t done clock speeds on each mode as CPU generally works fine. My background is landscape architecture so I’m rendering huge amounts of vegetation. If it can handle that easily then i imagine medical devices would be fine as well.
If you have a model I can do a speed test for you for comparison of your current or previous system setup.

Hello enquiries,
can you wait several months? Cause chances are that apple is revealing a new Mac Pro this year. And my personal opinion is, that the old Mac Pro which you mentioned, is outdated and overpriced.

Another option would be to get the iMac Pro, which eric-s is using. Or even a “normal” iMac.

Good point. I forgot to mention that the current Mac Pro hasn’t been updated in several years so best to hold off on that one. Also check refurbished if buying next to latest models…as I’ve used those in the past with no problems and have saved several hundred dollars by doing so.

Thanku, it will be my homework day I suspect.

There is no easy way to incorporate Nvidia graphics, some of the points have already been raised here, just to add my own views.

There is currently a ‘behind the scenes’ impasse between Apple and Nvidia, hence no current option.
I read this article recently, and I read something else (which I now can’t find) on either The Verge or ArsTechnica very recently which went into more detail regarding the impasse.

Anyway, the long and the short of it, is that there is currently no Mojave Nvidia web drivers available for for any Nvidia card.
Web drivers are available for Nvidia cards up to Pascal level cards (the 1080 series including 1080Ti and Titan XP) for High Sierra and you can use a script to hack an eGPU to run an Nvidia card.
The ‘easiest’ way to run a Nvidia card on a Mac is to buy a 2010 ‘Cheesegrater’ MacPro (they really should have stayed with that form factor, they were amazing!) and upgrade it and install a firmware flashed Nvidia GPU from macvidcards

This obviously has drawbacks in terms of cost of investment, obsolescence etc

Alternative is to build a Hackintosh running the latest High Sierra, which you can spec as high as you want, admittedly its not a trivial undertaking but there are full build and install guides / sites online and actually once you get your head round it, its not too bad but you can end up with a machine that runs rings around anything Apple CURRENTLY offers (and cheaper). If you want a hassle free existence, best forget that one.

In regards to Vray, the current version supports GPU / Hybrid rendering with an Nvidia card, AMD cards are not supported (as they do not run CUDA), the upcoming version does not officially support any GPU rendering on MacOS, this is partly because of the lack of drivers available for MacOS under Mojave and also no CUDA drivers (which Vray uses for GPU compute).
In addition, Apple’s move away from OpenCL to their own Metal Compute Shaders is another factor (that will eventually effect all other renderers that use Open CL for GPU rendering (Indigo render etc).
From what I’ve heard from within certain developer teams is that Metal Compute Shaders are currently not viable for GPU raytracing, if they were it would be considered but they are not so go figure.

It is a very difficult time for anyone that wants GPU compute capability (for rendering, photogrammetry processing etc) on MacOS, there is no clear future path, no CUDA, OpenCL being deprecated, Metal Compute still immature (maybe)
I personally find it insane that the builders of the worlds largest (and arguably best to their users) creative technology hardware platform does not and will not (currently) incorporate the market leader, and arguably state of the art GPU hardware to help drive that platform. Not all of us MacOS users are video editors, we are artists, architects, engineers, artisans, game designers, musicians and scientists. Currently the best GPU compute capability is delivered by Nvidia and looks to be for some time.

that the new MacPro offers those options - it is said to be built from the ground up as modular. I hope that Apple pulls the rabbit out of the hat with a technology partnership with Nvidia (I severely doubt this as AMD is a valuable partner and Apple’s Pro apps are built around AMD hardware acceleration).

I have been a lifetime Mac user (even used to be a Apple service engineer) but last year I seriously considered moving to Windows purely for the GPU compute future and Vray (actually I was using Maxwell Render at the time, which has GPU rendering on Windows). Anyway, I didn’t and ended up building a Hackintosh (which I am very pleased with).

But yeah, I’d probably hang on a bit and see!

I forgot about Vulkan. sorry. There is an unsupported (by Apple) Vulkan layer that runs on top of Metal (Vulkan VK, I think), that does offer compute capability but thats miles away from an implementation or software support.

Thanks, good bloody frustrating. You interested in building me a ‘Hackintosh’. I’m a creative that’s gone solo o no longer have the support I gave for granted. There’s a couple of projects I’m working with a Medico on that literally will change thousands of lives and unfortunately my trust in externally briefing it out does not exist.
Let me know I would be grateful as I am to date.
Kindest regards. Ant.

Hi, to be honest, building the thing is the ‘easy’ bit, the challenges come with updates, maintenance and if something goes wrong, knowing how to go about sorting it (or where to start!), unless you are able to or are prepared to learn how to manage and maintain the thing, I wouldn’t recommend going down the Hackintosh route, its not something that can really be supported via a third party as by its very nature it is a ‘hack’. Its really something that you have to deep dive into yourself in order to have the confidence and a resilient machine.

It has its hardware upsides, I can upgrade my 8700k 6 core Coffeelake CPU to the recently released 8 core version, I could upgrade my GPU from a 1080Ti to a 2080Ti (when available and if there was driver support). I don’t have thermal throttling issues, I’ve got a liquid cooling solution.

If you are seriously considering it, I would read this article first, this is what I read initially back in 2016 and prompted me to build my machine over Xmas last year (2017/2018).

There are also the extensive online resources and build guides at TonyMacx86 and InsanelyMac. You need to do your research first and make an informed decision (it took me 6 months to make that decision)

in case anyone is still interested over and above getting disappointed by the SU2019 release.

This article and video regarding Nvidia / Apple spat has just been posted over at AppleInsider.

Thanks for posting the link!

If ONLY Apple still made a tower with an up-gradable GPU but alas.

I would expect their new modular work station (coming this year - 2019) to be some sort of tower, and upgradeable.

Honestly, if they would make a consumer tower with: a PCIe graphics slot, 2/3 PCIe slots, 4 dimm slots and an M.2 ssd slot it would be a game changer. They won’t do it.