I am a really huge fan of Sketchup. I like drawing buildings, or furniture.

I am also an amateur genealogy researcher.

The software I currently found available on the internet, I cannot really use to look at my family tree and see all the people in it at the same time.

I was wondering if there is some kind of Sketchup plugin or something, that would help me simulate a genealogical tree inside Sketchup. It is really nice the way you can orbit around a building in Sketchup, and something like that would be awesome if you could do with a tree. Pretty much all the applications that I have found, have issues with the width of the tree (I have 300 people), you can not really show that in a “2d” page (check out the printed tree in the comments section here). I think in 3d, this would not be an issue.

P.S. I am not sure what category to select for this topic.

The elements of a geneology tree are inherently 2D. I really don’t think it would map well onto a 3D structure. A family tree is a form of diagram, largely a symbolic representation, whereas SU’s talent is modeling actual objects.

Have you really visualized what a 3D family tree would look like? Would the boxes be cubes? Which way would the writing face? Will the tree branch in all directions? You’re going to have to reinvent the entire set of rules for laying out the tree without anyone else’s examples to go by.

Remember, too, that SU does not really draw graphic lines. SU has edges, which serve as boundaries for 3D shapes; there’s no such thing as lines in space.

To me, it sounds like an ill-considered idea. I think you’d be much happier and more successful using specialized genealogy software.

Boxes or cubes?
I was thinking spheres for example, different color per gender

Which way would be writing face?
The way I am looking at from. Right now, if you add a label, it always faces you, the viewer. The same would be the name on each sphere.

Will the tree branch in all directions?
Yes, basically. Depending on everyone’s different tree …

SU does not really draw graphic lines
It could be like a wire frame, no big deal

much happier and more successful using specialized genealogy software
Did that, none of them can show more than ~30 people.

I think it’s a great idea.
You could use face me photos for the people with text labels for names etc and build up a very nice 3d tree.

Seems like the hard part for creating an extension would be figuring out an algorithm to arrange the branches in 3D space considering both the variable number of branches from each node and the geometric increase in number of nodes as you move down (up?) the tree. Actually drawing the tree once the arrangement is figured out should be pretty straightforward.

You could use face me photos for the people with text labels for names etc and build up a very nice 3d tree.

Actually drawing the tree once the arrangement is figured out should be pretty straightforward.

That there’s the whole trick, isn’t it?

There are various 3D virtual viewers for file systems, which have a similar branching structure (actually, with more potential for fan-out). Seems like there should be a known approach out there with potential for this…

wow, you just made this? it looks nice, and very close to what I have imagined.

Yes. Basically, there is a specific file format for family trees, storing person info (name, gender, etc) and relationships. The best case scenario would be if a user could import something like that. After import, yes, arranging the branches would be the first thing to accomplish. If no import though, I would be more than happy to add the whole tree manually, if I could make it look user-friendly.

thought to use the z axis as the years.

Oh my god. That is one super idea.
Second thought: a married couple with 30 years age difference would look kinda weird though

I think it would be a very enjoyable project to put together even without any plugins.
Just build up the tree manually adding as you go, create layers so you can hide things easily, you could even use layes to enable access to more information about one person or family etc
There is a pluging around that lets you add hyperlinks to things, so you could link specific people to news items, photo etc etc etc.

Guys, I am totally new around here, I registered today, but I have seen the “Feature Requests”.
What do you guys think, could there be any real chance for genealogy in there?

I know it’s a long shot, I know it’s very different, but, from what I have seen, there is nothing like this on the market. Could they be interested in this?
I Am in software development, and I am pretty sure that, (if they want to) this is nowhere near being something big, or hard to implement.

I don’t see it as being anything that Trimble would be interested in. Too far from the core purpose of the app. and their target markets. But there’s no reason an extension developer couldn’t do something. 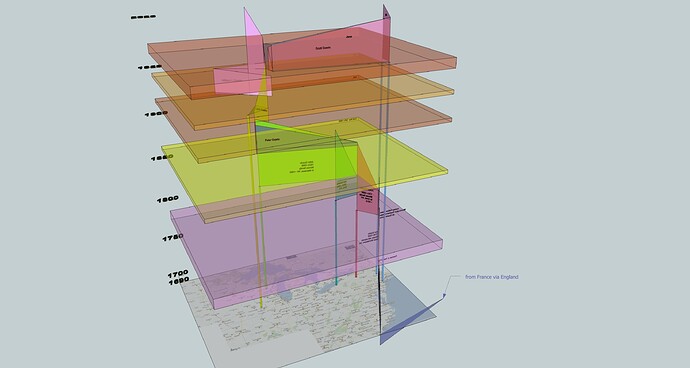 I wanted to share a still from my “ChronoMap” experiments. Time is the Z axis and I set the scale equivalent to 1 year = 1 inch.

I made an image layer of a portion of the US as a start. Then I made layers for each male ancestor. They came from France in 1690 landing in Charleston. The Chrono object shows how my core ancestors moved around the country and how long they lived.

To add to the information, layers representing the major wars are shown with the “thickness” equivalent to their length.

I haven’t played around with this in a while but I’d imagined a data-driven ChronoMap.rb and possibly creating a 3D print of the shape.