If you really like having all those utility windows floating over your drawing space obscuring your model, make separate trays for each window and scatter them about as you wish. I personally never liked the windows over the model space because they were forever in the way.

I’m not saying they should be all over. They could be stacked in a corner, showing only what I need them to show, without the big space in the bottom and would work just fine. You know… like they used to?

Maybe it’d be nice to have both options in the next release.

I never liked them over the drawing space at all. this is the way I set up SketchUp before the tray. This is SU2015. 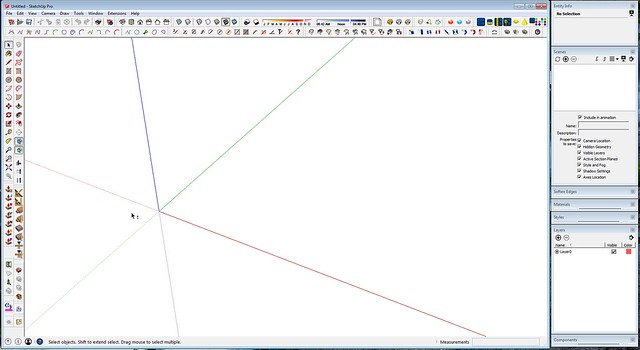 Now with the tray I gain some extra real estate for toolbars.

Also, I’m afraid that a request to reintroduce a feature that was ‘designed-out’ is going to be at the bottom of a long list !
They haven’t even managed to fix an annoying longstanding glitch for about six years…
Make a group [or component] and lock it in place.
Select it and some other things and Move them to one side by picking two points…
Ding! as expected the other things Move, but the locked object stays put.
BUT, now type in a distance + [enter] - the objects readjust to that new distance for the Move - however, the locked object now also Moves - so its ‘locked-ness’ is ignored.
This cannot be that difficult to fix, but it’s never been addressed…
So what hope for your ‘reintroduction’ ?

Well, to me the tools aren’t as important as the workspace, because you can add shortcuts to them. The more I see of the drawing the better. I only need to see important ones like Entity Info or whatever I use at the moment, and then I close them with a click. You see, a big problem for me is that the workspace re-scales when showing the tray, and having to hover the mouse and then waiting for the animation to sweep just to show something there is a bit time consuming.

Trays sure look more organized but, to each his own, right?

To each his own is true. Leave the tray out all the time and your drawing space will remain the same size. It’s not a huge intrusion into the workspace and the utility windows will never be masking part of the model.

In any case, as TIG said, even if it was on the list for reintroduction, your request would be toward the bottom. You might just as well get on with using tray. you could always put the tray on another monitor, too.

Too bad things don’t always change to fit everyone. Thanks for the tips anyway.

There is a very easy way to get the old tray system back… just switch to the mac version! The new tray system is only implemented in the windows version.

A big problem with the old “sticky” inspector panels is that they were always bugged on the PC. They never could get them totally fixed. Just when I’d get them set up the way I wanted, suddenly SketchUp would reshuffle the order of the stack upon startup. That and they constantly kept forgetting what the origin (top left corner point) of the stack was. I had mine at 0,0 outside the main SketchUp window, and SketchUp kept moving the entire stack back to the top-left corner of IT’s application window (which was over to the right by one panel width.)

I long was a proponent of going to the MS MFC tray system, which I’ve used in other software since probably the early 90s.

Please, let us not go back to the “stone knives and bearskins.”

I only need to see important ones like Entity Info or whatever I use at the moment, and then I close them with a click. You see, a big problem for me is that the workspace re-scales when showing the tray, …

That sure must be nice for mac users, but I also need to work with a bunch of other software like 3ds max and Lumion.

Well, I don’t know why but the autohide function isn’t exactly the best option for fast modeling. It can be frustrating to move the mouse a bit and have it close again by accident, then wait for it to open again (wich sometimes looks laggy) or like I said: scrolling can be time consuming. Having it open all the time is not very aesthetically pleasing either and it takes a lot of workspace (for those of us who only use one monitor or sometimes a laptop).

I guess it must be a good idea to have them flying around if mac users still have them.

In the end, apparently, we won’t be seeing them again anytime soon, wich is a shame, but it’s nice to see other people’s opinion on that.

I agree they are slow in the slide department !

I guess it must be a good idea to have them flying around if mac users still have them.

They only still have them because the trays are a Microsoft framework.
I’ve heard many Mac users ask for the tray system as well.

Interestingly, in the recent discussion about Ruby code editors I discovered that the netbeans ide uses a tray-like system on Mac!

I also miss the inspector windows. My biggest problem with the tray is the nested scroll bars and low contrast between the title bar and content. I don’t know how many times I’ve scrolled an individual inspector (e.g. materials) when I wanted to scroll them all or vice versa. I also need more time now to than before to find the inspector I’m looking for. Previously I hardly had to look to open an inspector (I always have them in the same order) but now I have to read the title text more often because the hierarchy of titles and content is much less prominent. I’ve also seen students struggle with this.

The odd thing is that I have no problem with the Tray in Layout. I think the additional 1 px between inspectors along with the darker title bar border in LO really helps conveying the hierarchy. The border around the whole tray area as well. I also like how the overall tray title bar in LO lines up with the document tabs to the left. The slightly un-centered close buttons with the white border around them in SU looks a bit noisy and sloppy in my view.

In general I think the toolbars in LO feels much more polished than in SU. Maybe this could improve in a future version?

I agree with what everyone says, how about that…

For me there were/are advantages and disadvantages to both the old and new systems. I miss the simplicity of the old trays but not the fact that on PC they had a tendency to mess up as DanRathbun wrote [quote=“DanRathbun, post:12, topic:38706”]
the old “sticky” inspector panels is that they were always bugged on the PC
[/quote]

And as Eneroth wrote about the small differences to the tray UI in LO make a big difference to usability, plus this:

how many times I’ve scrolled an individual inspector (e.g. materials) when I wanted to scroll them all or vice versa

…And what Guillo the OP wrote:

isn’t exactly the best option for fast modeling. It can be frustrating to move the mouse a bit and have it close again by accident

For me the biggest desire I’ve always wished for (stay on topic, Ian…) is for there to be the choice of autohide trays and to be floatable or to be able to fix them as side panels and have them autohide… or not…

If you catch my drift…

At the moment I change about. I have either one tray fixed open and have the others autohide and show over this, or none open (just autohiding) to allow me to do use maximum viewport space, for the right pixel dimensions for 2D export.

My biggest problem with the tray is the nested scroll bars … I don’t know how many times I’ve scrolled an individual inspector (e.g. materials) when I wanted to scroll them all or vice versa.

Well I have mine set up so on most there are only 2 or 3 panels, and then I adjust the panel heights so that the tray scroll bar disappears. Then only the panel scroll bars will be normally visible (I use named lists rather than icon grids for inspectors.)
When I do something like open a secondary pane for say the Materials panel, then that is when the tray scroll bar appears, and I know which it is because I just caused it to appear. Often a click on the other panel of the tray (Components in this case as it’s my “Resources” tray,) will collapse it, and the “master” tray scroll bar will disappear again.

Re, the images Christina has shown, … the “Default” tray was never meant to continue to be the way the panels were used. It’s just the way that MS suggested that all panels be shown when an application was first installed.
The user is expected to adjust them, create their own trays, sets of tabbed trays, others floating, others auto-hidden etc.

I have my panels divided into a tabbed set of 4 trays docked on the right:

They are slightly different now, ie, detail name lists (instead of thumbnails) and the panel heights are adjusted so the tray scroll bar is suppressed. (And the auto-hidden trays are now docked to the left margin.)

And just for cross-reference, we’ve discussed these same things in a few other threads:

… so we keep repeating ourselves.

Good discussion.
For myself I prefer the SU16/17 trays over previous structure.
For navigating in my set-up which is one vertical tray of 7 panels,
I use Shortcuts to open a particular panel (eg: Preferences>Shortcuts>Windows/Show Styles) and a click on the header to collapse. So what I would like to ask for is the addition of a Shortcut = Windows/Collapse All, as an additional option to clicking on the header.
Best