Due to the complications caused by roof returns I had to jump through a few more hoops to get the soffit and fascia (and roof cladding extension) fully functional for common trusses:

Unfortunately, I still cannot release these latest upgrades to the public because in changing up the advanced options module I may have possibly broken other truss types.

Tomorrow I will need to do some thorough checking to make sure the other truss types: attic, scissor, monopitch, cathedral etc… are working correctly and can now work with the soffit and fascia module.

Probably another solid day with soffit and fascia (extending it to many of the other truss types) and then I will be back on the rafter module and pushing hard to get something pulled together for secondary and complex roofs. I still need to come back to the drip edge but I think it can wait until I have the more important stuff dealt with. The nice thing about drip edge is that it will not affect other geometry or modules, it will just be an add-on, much less complicated.

In the process of revamping the gutter and roof returns module in order to handle soffit and fascia I did manage to turn up a few additional bugs which I have addressed. Its always nice to kill two birds with one stone.

As the complexity and depth of the plugins have increased I am finding it more difficult to juggle all of the plugins at once. Lately, I have given the other plugins a rest (except for critical bugs or minor fixes) and then dived deep into the current plugin of interest. At some point it would nice if I could bring on additional help so that development is ongoing with each plugin on a daily basis.

Roof labels and callouts also added to this truss type.

Soffit and Fascia now available for Scissor and Cathedral trusses:

I only need to look at the monopitch truss edit menu and address a few changes to it and then I will be ready to push all of these changes out to a new version.

This was a fairly substantial upgrade with lots of changes. I wrapped up quite a few hours of testing today but there will probably be something that gets away from me, there always is.

Now its time to go after the much larger fish… Complex and secondary roofs.

Look at all that beautiful framing:

*** The Medeek Truss extension will no longer officially support SketchUp 2015 and SketchUp 2016, only SketchUp 2017 and newer will be supported. ***

I have reluctantly made this decision based on the additional time and effort I am spending trying to put in place additional logic (band aids) within the code base to ensure that the plugin maintains compatibility with these older versions of SketchUp. At some point it is simply no longer worth the effort.

If you are plugin user currently running one of these older versions of SketchUp, I would strongly suggest that you upgrade to ensure continued operation of the extension. The current version of the extension will probably still work with either SketchUp version however moving forward there will be no guarantee of compatibility.

Looks like Justin has featured the plugin in a demo of Quantifier Pro:

It would have been better if he had turned on the gable truss option in the global settings but regardless I appreciate the featuring of the plugin.

Justin does a nice job with those videos.

Working on the edit menu for the shed rafter roof. If the user enables soffit and fascia for this roof type I will need a small routine that checks the rafter depth and trims the upper rafter tails if the rafters are deeper than the barge rafter (rake board):

For the lower end rafter tails the soffit cut parameter takes care of this problem, however with an angled soffit I will need a similar routine for the lower rafter tails as previously discussed in a post a few days back.

Roof returns (rake, hip and full) have not been enabled for rafter roofs yet, that is something that will need to be setup for this module as the truss module already has this feature.

A number of other upgrades for this roof type as well: Front and Back gable overhangs, Roof cladding extension.

I’ve beaten soffit and fascia to death but there still remains more to be done.

The gable and angled option still need to be made available with the truss module. Additionally I have not yet enabled soffit and fascia for hip truss sets as well as other more exotic truss types.

Note that soffit and fascia can only be enabled once the roof or truss assembly is created (within the edit menu). This is on purpose. Only those truss or rafter families that have the edit function available can have soffit and fascia enabled.

This update was per customer request. The direct material import feature previously was added to the Wall plugin but was missing from the Truss plugin.

This is the first new icon for the main Truss plugin toolbar in quite some time:

The complex roof icon/tool will allow the user to pick between either a truss or rafter complex roof (first HTML menu), then the user will select a horizontal (closed) face which will be used to determine the perimeter of the roof. Before the user selects the outline face they can utilize the complex roof draw menu (HTML menu #2) to adjust settings (ie. overhang, pitch, sheathing, cladding etc…)

The draw menu will stay open and the tool active until closed or space bar is pressed. So multiple complex roofs can be created one after another with the given settings. Similar to the wall plugin I will probably implement a system of roof presets so the user can quickly jump to a specific configuration.

My latest code for menus in the Electrical plugin is my cleanest and most advanced code for dealing with interactive HTML menus. I will be borrowing heavily from this plugin initially to setup my basic tool and menu systems.

I will also at some point allow the user to select the points that define the roof outline rather than selecting a face but for the time being I’m going to keep it simple and just allow the face selection method for now.

I am starting with the complex rafter roof first. The truss variant will be even more troublesome and problematic so its best to cut my teeth on the rafter variant and see how far I can take it.

The first menu will use the following two images to select either a rafter or truss roof: 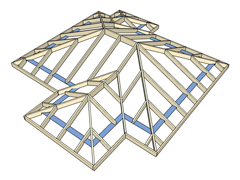 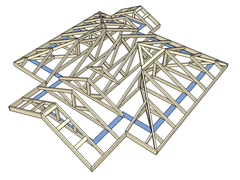 When you initially create the complex rafter roof all plate heights, rafter depths, pitches and birdsmouth cuts will be the same for each eave/roof plane. Then I would like to have a system whereby the user can potentially edit each and every eave, changing up these parameters as they desire as well as switching certain hip planes to gable or vice versa.

Additionally it will be useful to have a system wherein you can also edit the underlying outline that defines the entire roof. This latest module is not going to come easy but if I can pull it off it will be a very nice tool.

The idea being that you should be able to adjust the roof parametrically as if it were a piece of clay and you are the sculpture.

The “no framing” mode is per customer requests. I’m really not sure how much utility this features offers but it certainly will keep your model more lightweight if you choose not to show all of the rafter framing.

I also added this parameter in preparation for the upcoming complex roof module. With complex roofs the ability to eliminate all of the underlying framing will be a much bigger factor in my opinion.