"Zombies and Other Entities"

I was doing this without any issues yesterday and my workflow hasn’t changed since then. However today I’m trying to import a DWG created in Illustrator of some rail mounted Text.

Normally I outline the text, combine the shapes, and add anchor points in order to keep SketchUp from defaulting to the jagged curves. This has worked 99 out of 100 times without any issues from my files or coworkers files.

However today I’ve copied a set of text files from a coworker’s illustrator file and created my DWG’s and SketchUp is creating the most awful jagged profile I’ve ever seen. I’ve created about 20 different files, some of them rebuilt from the ground up and some of them just trying to work with what I had and the result is the same.

We also noticed that when it imports it says “Zombies and Other Entities” under the “Ignored” section of the dialogue box. Anyone have any idea what that even means? 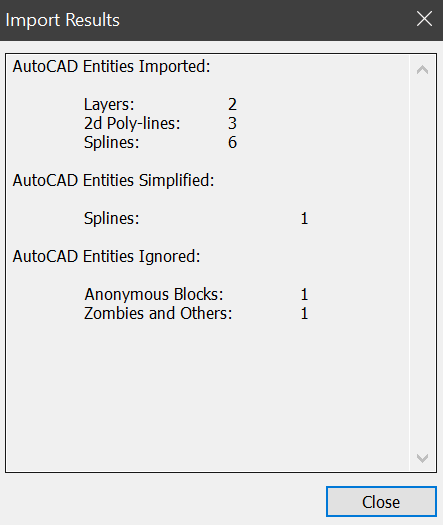 Pls do not import Zombies…

In AutoCad jargon Zombies are objects that have been created with an add-on that is not currently available. I don’t know why Illustrator would create these, so what has been ignored belongs probably to the “others” category.

The SketchUp importer is not very good at converting spline outlines. The old workaround is to edit these in Illustrator prior to exporting by adding anchor points and then straightening the segments between them. SketchUp DWG import results may also improve if you use a larger than life import unit and scale thge result down afterwards.

@Anssi I add anchor points every time I import a DWG file that’s 2D… For some reason yesterday SketchUp just wouldn’t import the file correctly. I sent the file to another designer and it imported incorrectly on their machine as well.

It’s something to do with the Ai file that was created elsewhere. I imported a DWG this morning without any issues and it was the same process of exporting. My guess is something with any layers in the parent of the Ai file is corrrupting the linework and SketchUp’s ability to import it cleanly.