A little while ago I got one of these, 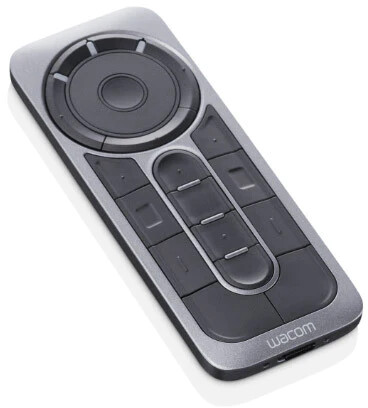 and have found it to be remarkably useful.
As you may be aware I mostly use a stylus and Spacemouse with Sketchup and have never been huge user of keyboard shortcuts. Some certainly, but I’m a hunt and peck typer so not overly efficient (mostly due to moving around the world using other people’s computers with different language layouts). Plus I use a tablet screen with Touch Portal for most of my shortcuts. That is all a very comfortable workflow for me in Sketchup.

But, and this is the big but, the spacemouse is effectively useless in Layout so I sort of have a loose hand free that isn’t that good on a keyboard. But stick a remote in that hand with 17 fully programmable buttons and a kind of scroll wheel and away you go. You don’t need a tablet and stylus for it to work, it is pretty much a stand alone device. Not overly cheap but considering how much it has sped up my Layout work well worth it. Not to mention you can use it with anything and program it specifically for different software. Very useful for graphic software of all kinds.

Anyway, just thought I would mention it.

Interesting. Wasn’t aware of that at all despite being a Wacom user seemingly forever.

I wasn’t aware either, stumbled on one for sale and looked it up, then bought it cheap.
They are a fairly new addition to the range, seems like they have decided to do away with the built in Express keys and go with these instead. Bit of a double edged sword, they can charge more for it and save on costs in the main tablet build, but then again it is far more useful than the standard express keys, in my eyes anyway, they never seemed to be in the right place.

Forgot to mention in my earlier spiel, if I wasn’t a space mouse user I’d be all over this for sketchup.
In fact I wish it was bluetooth rather than dongle so it could connect with the ipad, would be ideal for that. Hopefully apple will make one.

I use a ShuttlePro2 but this looks more compact and has two more keys and is wireless, I’m very interested. But it’s not clear on the site, you’re saying one ExpressKey can be setup too multiple programs? Or do you need on ExpressKey for each program?
from Wacom: You can connect up to five ExpressKey™ Remotes at a time (one for each creative software applications) to optimize your workflow.

Yeah I’m not sure what their marketing department were smoking the day they wrote that. Yes you can have five different devices attached to the same computer, they all use their own dongle so they are all recognised as different devices. This means, yes you could program each for a separate software, but why on earth would you. Ok there may be a use case I haven’t thought of.

Like most wacom devices it is individually programmable. As an example I have several styluses (mainly due to the thing they were for no longer working) and they are recognised by the wacom software as different tools, So I have my main one set so that it is mapped to one specific screen of my four screen when I’m using sketchup, but if I want to use a stylus with the web version which is open on another screen I can simply change stylus and it will automatically be mapped to that screen. I could have it set so they first stylus changes screen mapping when I change to Firefox, but that means a bit of gymnastics anyway so it’s just a easy to change stylus as I have a spare. Perhaps this is the sort of thing they mean.

But, ignoring that, you set the remote to do what you want in whatever program has focus. So I set various ‘global defaults’ then chose Sketchup and changed a few, then Layout and changed a few more there. So as your mouse pointer moves from screen to screen the buttons change what they do.
It makes sense to keep them doing similar things or you forget what you have set, but a similar action my be a different keyboard shortcut in different programs. I have copy and paste set as a default and in Sketchup I have change the ‘paste’ to ‘paste in place’. I have flips set for sketchup, but the blue and the red I changed to top to bottom and left to right in layout.
I think you get my drift, I can copy and paste from a web page to an excel file and then move to sketchup and layout all without thinking. The scroll wheel thing is a bit different, the button in the middle changes it to three options, each can be programed. The defaults are set for brush sizes in photoshop and things like that. You will have to work out what works for you with those, I’m still playing with them. I did find I could set them to keys and almost turn off the scroll action which means a swipe clockwise is one key and anticlock is another key, so I currently have eraser and pencil on one of those. Useful for doing a lot of 2d measured floorplans in sketchup. You can set them to move in layout, so one way moves an object up and down, another could move left to right.

Bloody hell that was somewhat verbose. For the TLDR version, one can work differently in many programs.

Not too verbose. More info is always welcome IMHO. Thank you!

Just looked up the ShuttlePro2 and it led me to another comment. The ShuttlePro2 is somewhat like the fancy space mouse without the actual spacemouse, but in the sense that you would sit there concentrating with one hand on the mouse and one hand on the ShuttlePro2.
I’ve found the Wacom is more of the lazy mans tool, you can sit back in your chair mousing away with your other hand in your lap or on the armrest pressing buttons. But it can still be place on the desk and used that way. I’m finding that I keep it in my shirt pocket and pop it out as needed with all sorts of programs.

Yes, that’s one of the aspects I don’t like about it… not really portable.