My tape measure has stopped working recently. My file has gotten fairly large and dense, but I’ve cleaned it up and resaved a couple of times. I can select the tape measure and it appears with either a purple x or a red one, but it doesn’t seem to want to latch on to any fixed point, it appears instead to hover. When I try to click and drag it will create a straight shaded line as if it will be measuring to a point, but when I attempt to get a reading on an end point no point appears and if I check “edit” for my last action the tape measure isn’t listed. It also isn’t reading correct dimensions as I drag it along a known surface and won’t create a dashed line.
I suspect there may be some tiny thing I should be doing, but I just can’t figure it out. I have confirmed that guide lines are on, but other than that I’m stumped. Would love some help.
Thank!
Kim

It could be one of several things. Could you share the SKP file? Privately works if you don’t want to make it public.

This can happen if you are not displaying “Edges”: 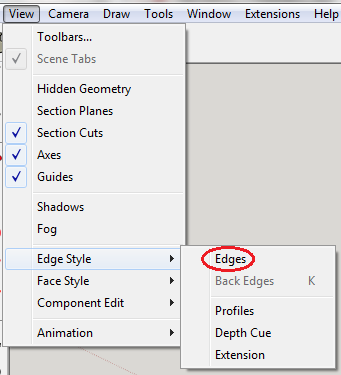