Here in Europe, energy use for heating buildings is going to be a major problem from this heating season onwards. It will be unaffordable for many.

So, spot the flaw here. Heating the whole volume of air in a building is a very inefficient way of staying warm. So what about wearing a form of electric blanket? Looking online, you can buy coats and gilets that have heating elements in them and a rechargeable battery pack. Apparently, a charge can last up to 8 hours for a modest level of heat. So you might only need two batteries/charges per day. They are really designed for outdoor use, but why not extend it to an underlayer of clothing that you can wear indoors? Is there a business opportunity here for the enterprising or have I missed something obvious?

Obviously, our dogs won’t be happy.

I happen to have Ridgid cordless tools and I know they, and some other manufacturers, also make heated jackets… but I go with a blanket over my shoulders.

So the Brave New World is here already!

Looking at one of the base layer options, it recommends the low power setting for temperatures between 50F and 64F (10 - 18C). If that’s fair, it means you could turn down the central heating to, say, 12C and then rely entirely on your heated clothing to do the rest. A charge is then claimed to last 4.5 hours, so you would need to recharge several times a day. But that’s like you do for cordless tools. No sweat.

When the weather turns cold, I aim to try out some of these to see for myself how well they work. Where I live in the UK, we have very few days that are sub-zero outside, so raising the temperature of the house from single digit heat to 12C would hugely reduce our carbon footprint compared to the 18-19C we usually operate at.

Seems reasonable, Simon. Be careful though: I was almost sucked into a vortex of heated attire review videos.

I have a Milwaukee heated jacket. It heats in two zones, front and back, and if you keep it to one side and low heat, the battery lasts about 4 hours. If it’s on high both zones, it’s about an hour. Mine works better under another jacket (which isn’t a problem because we spend several months here working outside in temperatures that freeze your eyeballs, the more jackets the merrier). Actually most of us up here have the Milwaukee jackets and the biggest complaint I hear is the battery size, and where it hits in the spine when you sit in a backed chair. The men’s jacket battery is down on the back side love handle, and the women’s battery is right under my left shoulderblade.

I also have battery powered socks that come into play on days I know I’m going to be miserable.

Interesting. I presume the battery is removable for charging? Can you get additional batteries so you always have some fully charged and ready to swap out?

We have to be a bit careful over here with US electrical equipment as we run on a spine tingling 240V system!

As far as the Ridgid jacket goes, it uses a smaller battery but is compatible with larger sizes (and the smaller battery can be charged from larger ones). I have a number of these batteries and charges, so that’s what I would go with.

It looks like some of the heated underwear (something I didn’t expect to type today) use usb chargers, so could be plugged in while at home. Some electric underwear looks to have apps that let you control the temps of you garments.

You could try to go, “Wim Hof”, but the concentration required for the breathing might interfere with work tasks.

I have just come across a range of heated clothing sold by Regatta. Here is the battery they use: Regatta Heated Jacket Battery Pack - Fire Label. Looks a lot easier to accommodate than the Milwaukee version.

Doesn’t a dwelling to some extent (at least here in UK) depending on type, need some level of heating to help eliminate damp and condensation…?

That or increase ventilation?

I don’t know enough about the dynamic of moisture / temperature / ventilation of buildings.

I have original single glazed sash windows and as a result my house is comparatively well ventilated 24/7 and has never suffered black mould or condensation on walls.

My energy direct debit has already increased 80% and I’m dreading the upcoming raising of the energy price cap!

I understand that a lot could still be done to improve the energy efficiency of buildings in many countries. Aren’t many houses in the UK still with single glazing, for instance? Here, triple glazing is the norm, and windows with two double-glazed casements are widely available.

Doesn’t a dwelling to some extent (at least here in UK) depending on type, need some level of heating to help eliminate damp and condensation…?

Sure but not to 18C + which is what most heating systems are set to achieve. Condensation depends on dew point, so warm, moist air will condense on cold surfaces much more readily than colder air which cannot carry so much water vapour.

I have original single glazed sash windows and as a result my house is comparatively well ventilated 24/7 and has never suffered black mould or condensation on walls.

It’s probably the ventilation that is doing the work. I have seen plenty of black mould on windows that are single glazed. But a house that leaks like a sieve isn’t what we normally aim for nowadays!

I have designed a new house along Passivhaus principles. That means triple glazing and a virtually hermetically sealed super-insulated structure. Which in turn means careful ventilation management to ensure fresh air without draughts.

I understand that a lot could still be done to improve the energy efficiency of buildings in many countries.

Sure but it is difficult and expensive. Not a solution for those on a low budget.

Aren’t many houses in the UK still with single glazing, for instance?

Here, triple glazing is the norm, and windows with two double-glazed casements are widely available.

We are certainly behind the curve. Mind you, we don’t suffer many days below zero, so it’s not quite the same. Large parts of my house don’t need heating in winter on sunny days because of the solar gain and large areas of south facing glazing. But when the sun goes, that’s a large heatloss area of course!

The point of my OP is finding a solution that is affordable to all and that can be implemented right now. No building solution comes close to achieving that. In the UK, probably as elsewhere, the powers that be expend lots of effort on controlling how new houses are built, but as we only build a handful each year, it conveniently ignores the much more significant issue of the existing building stock.

I have single pane windows at my house… trying to improve insulation with stained glass (clear in this case). The idea is to create an interior ‘storm window’ that buffers the interior from the icy air blowing on the thin glass. 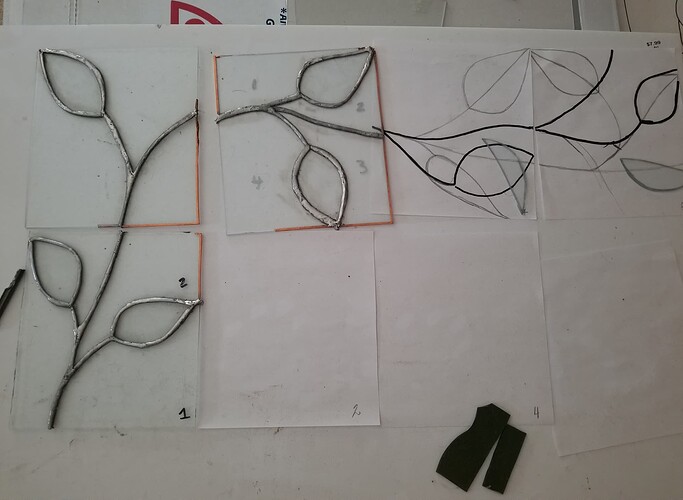 My house is in Conservation Area (not Listed) but my street and some immediate others have what is called an Article 4 Direction in place which means more controls and Planning Permission if I want to do something with my front elevation sash windows.

The planning guidance strongly implies that the planners would want me to retain the timber sash box and sashes, so either slimline double glazing (which in my case I don’t think is feasible) or secondary double glazing internally.

Or the planners might be persuaded by some modern architectural window solution…?

The zone valve thermostats will certainly be tweaked down this winter.

Thinking of putting up that heat shrink plastic over my windows but that is a single use solution.

I’ve looked into getting some writers gloves for when I’m at the computer.

Thinking of putting up that heat shrink plastic over my windows but that is a single use solution.

It does help. But it doesn’t always look nice and paint can stick to the tape.

We kind of have double glazing, but we are living in between them. 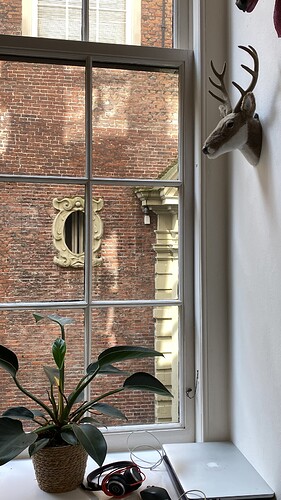 Back in the nineties, we used a special double glazing type (4-6-5) with alustriping of 12 mm, which we used for restoring sashed windows.

There is now single glass with special coating(s) that are more efficient then those.

We have to be a bit careful over here with US electrical equipment as we run on a spine tingling 240V system!

I actually grew up in Germany and then spent 5 years living in Edinburgh, working part time as a theatre electrician. Trust me when I say I know what 240 tastes like

I actually don’t recommend the Milwaukee jackets, but yes, the batteries are the same ones that work the smaller power tools, which is nice because while at work we all just rotate batteries through the chargers with the tool batteries.

Slim DG became quite a thing when it burst onto the market many years ago. Conservation officers didn’t know what to make of it. On the one hand, it could be fitted to existing windows (so you didn’t either have ugly thick glazing bars or fake stick-on bars), but on the other hand it was still the dreaded double glazing and non-traditional.

I would be surprised if COs could put up that much objection in the case of unlisted buildings in Conservation Areas but who knows? Some of them seem to be related to the Taliban.

I have never specified slim DG but I hear that it isn’t all it’s cracked up to be. Expensive, not very insulating, and fails often. So yes, secondary DG may be your only option (but check out @MikeWayzovski 's post for an innovative option (does he really have a house with 84 windows? He must have a bigger heating problem than most).

Ski gloves are very good at keeping the heat in. Not so good for watchmaking though.

There is now single glass with special coating(s) that are more efficient then those.

Is there? I haven’t looked at all the options but the two I did look at had illustrations like this: 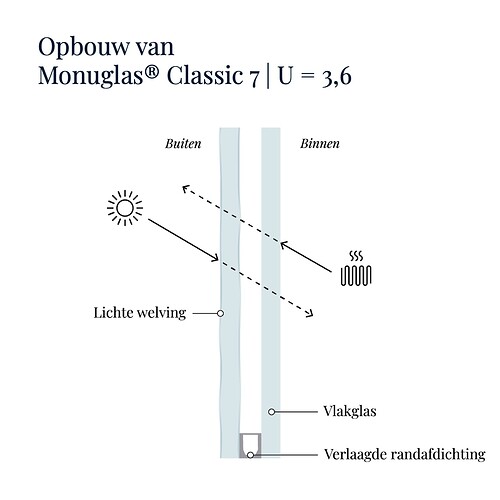 Isn’t that a form of DGU?

I didn’t see an English option for the website so I couldn’t read what it said.