I have ran the SketchUp benchmark on the Mac Studio, native and rosetta 2. And ran the test on my older iMac as well… See my previous post with results. Under rosetta 2 the Mac Studio is equal to the iMac. Running natively it’s faster, but with larger models the difference wasn’t dramatic.

I will test again soon, I still have a couple of days before having to return it.

So will report again if I have new findings

As a Mac user for 30 years - I currently have an intel based iMac and run Enscape via Bootcamp.

I love Enscape for SketchUp and it’s ease of use. I’m happy to hear that Enscape for Mac will be released in the first half of 2022. As soon it’s out I can but a new Apple Silicone Mac.

Anyone out here running V-Ray on Apple Silicon?

Happy with the performance? Is it a significant improvement compared to your previous machine? .

if you are happy with CPU renders its fine, its obviously much quicker than my previous machine . TBH I use Vray mainly because of the excellent integration with SU, so I use the asset editor and VRay tools to manage my materials and UV’s etc, just that alone is worth the money to me. these days pretty much all my renders are in Twinmotion but I use vray tools to manage the texturing and texture sets in SU, it’s just part of my workflow through from Substance into SU then on into TwinMotion.
I have the option of Vray render if I need it but I’d use Chaos Cloud for the final render TBH.

I had a Hackintosh with a GTX1080 Ti previously so I used the officially unsupported CUDA rendering in VRay.

Once Skalp is finally working on M1 I’ll re-task the Hackintosh into a PC render node and swap out the card with a newer RTX.

from back up the thread…

Hi, I moved to a MacPro M1 Max (32Gb) from a desktop Hackintosh, I do a fair bit of visualisation and have used VRay and Twinmotion for a number of years. Twinmotion (although still running under Rosetta) seems to work very well for me, and apart from a small annoyance over the pointer click targets in relation to some UI elements (there seems to be a 10 pixel discrepancy), Output speeds are vastly quicker than my previous machine (i7 8700k, 64Gb RAM, Nvidia GTX1080Ti). Saving and opening larg…

Thx… That’s some useful information, I’ll look into it!

I am mainly doing small visualisations of roomsj with fitted furniture I have designed like this. Do you think the M1 pro 16gb would be ok of go for the m1 max 32gb?

I would deffo go for the 32gb. You need to give yourself some overhead and future proofing on an investment like that. Pro or max depends on how much you value GPU perf. If using Vray, it’s CPU bound anyway so pro/max doesn’t really come into it. If you are using other software in your pipeline that gain benefits from GPU cores then that has to be part of the equation

Thats super useful thanks for all the responses!

Let’s see some trees, clouds, flowers, landscaping, textures, reflections, cars, people, furniture, lighting fixtures, interior renders, animation…. I feel like there are a handful of experts getting decent quality renderings from Blender, but most of what I see is lackluster and my impression is that it takes a very long time to realize. I would be happy to see more fully developed images?

It’s a tough call. Being an architect, my understanding is Blender isn’t really a perfect match for the task, but it’s no slouch either, so I’m not sure what to say. @liamk887 seems to have mostly left SU for Blender, and I see the results on his Artstation feed like this example.

That said, I have to say, @bifterx is great with V-Ray and holds his own on Artstation as well. I’m almost embarrassed to create a profile there just to get the free tutorials.

No doubt Blender can render fantastic images in the hands of someone who knows what they are doing. I just don’t see many of them operating in the architectural rendering field, and my impression is that it’s an uphill battle. I didn’t mean to be dismissive, I genuinely would be interested to see some Blender based images that have decent entourage and compete with V-ray, Twilight, Twinmotion and the like in quality, and to understand what the workflow really is, and how much post processing there is.

@liamk887 has been churning out stunning images for years, I’m a fan since I first ran across his work here on the Forum. Anything he touches comes out looking pretty good regardless of the tool and I’m sure his Blender work is no exception. I’ve seen @bifterx 's work on the website and it’s also really clean, I believe also a Twinmotion user like me.

I use Unreal for 90% all my rendering, if in a very tight spot them maybe Twinmotion.

Twinmotion is software where all the work for the Unreal engine is done automatically.
One can take Twinmotion projects and dive deeper with it in Unreal.
Of course, there is a learning curve.

Don’t have access to a desktop now, can’t use Unreal or Blender. I can still use SketchUp, however 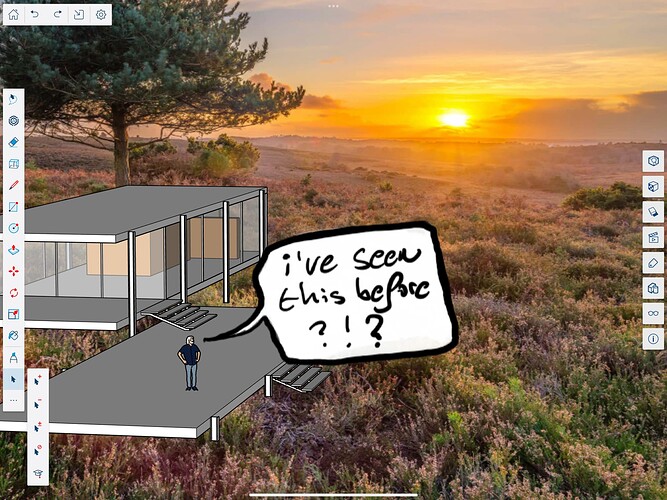 This is my direction of travel.

I genuinely would be interested to see some Blender based images that have decent entourage and compete with V-ray, Twilight, Twinmotion and the like in quality, and to understand what the workflow really is

Same here, I’ve got Blender on my machine, I like the idea of it, I’m encouraged by the Apple engineering investment, I haven’t had time to honestly assess the time and effort to integrate it into my workflow.

In the back of my head, the little voice keeps whispering in my ear ‘UE5’ & tbh that has been my plan for a couple of years now (for reasons). I’ve been so pleased with Twinmotion once you work out tricks to get OK results from it (the vegetation system was a revelation) even without the ability to use the new path tracing capability and it works well on my M1 Max (even under Rosetta).
I do very little post-processing, I just have a simple Camera Raw workflow in Photoshop that takes maybe 1 minute per image.
So I can see that direct workflow path through TM to UE once I’ve sorted my last couple of software (looking at you Skalp

That said, I do genuinely love learning new DCC software if I believe its going to get me where I want to be, so I always hedge.

I’ve used SU Podium on Mac for years but never produced results as good as I’ve seen others do. It’s certainly fairly easy to use and affordable. I’ve been wanting more control, so my current path is learning V-Ray for Mac, but I’m on the trailing edge of hardware not the bleeding edge; a new M1 isn’t in the near future for me.

I just sat on a webinar on Utilizing VR for Construction with almost all Enscape personnel. Regarding a Mac version, they gave this link to sign up for a newsletter on it’s progress. Sounds like an open beta for that is close.

Just out of curiosity, I looked up Electric Image Animation System and it still seems to be a going product:

I haven’t heard anyone mention it in a long time, but that’s what my (at the time and now ex-) brother in law, and his BFF in all things Macintosh, Ron Cobb, were demonstrating in a booth at SIGGRAPH in 1989. Today it lists ArchiCAD and Form-Z as having specific exporters for it. Anyone else have any knowledge or experience with it?