I am trying to export a SketchUp model for a school project in order to view it in Google Earth (kmz). However, every time I try to the program instantly crashes. This problem doesn’t occur with other files and still occurs on other computers, so I don’t know how to fix it. I have attached the crash report, would anyone be able to help? 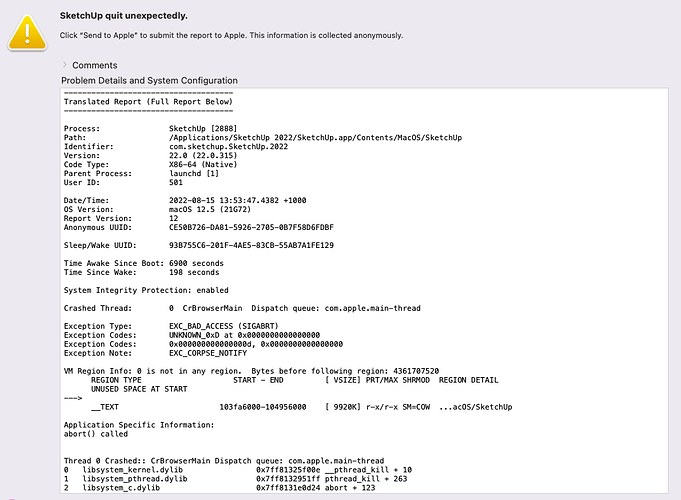 You should also share the model (.skp) here so people can inspect that.
You can drag it in the answer window if it is below 16MB. Otherwise upload it to Dropbox and share the link. Make sure it is set to be public!

Did you get a BugSplat? Because the trigger was an abort by the software, often you wouldn’t - an abort takes the app down immediately, including the BugSplat system. The most common cause of an abort is a graphics card issue, but the screenshot you posted is truncated too high in the stack traceback to be able to say more than that the abort came from a dynamic library of some sort.

I’ve seen it crash like this when trying to export a very large file - which google earth won’t like anyway - I think it has an upper size limit.