Significant Drawing Glitch Bug Found: Can anyone solve this? 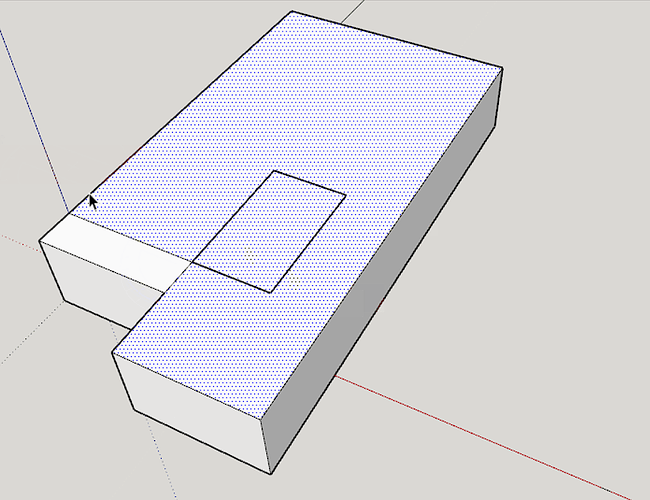 What you’re looking at in the photo is me recreating a bug I found when I had a floor that was inside a building, there was than a small deck that sticks out from the floor on the bottom left of that object which you see drawn into the overall floor shape. Anyways, the specific thing to look at here is when I draw a box off of a corner in this scenario (the corner of that deck, or rectangle, however you want to look at it) I get a shape that is merged with the outer box it is within, you can see that in the photo where 2 rectangles are selcted together when I only tried to select one of them. I should be able to select any of the shapes individually as they are all enclosed complete geometry, however I can’t, it selects the small rectangle and the rectangle immediately outside of it. The only way I could select the rectangle (the final small one I made and am seen trying to select) is if I draw a line carrying across the point of the corner of which I drew it from, than you can see it lets me select the rectangle.

The summary is that I should immediately be able to select the rectangle I drew at the end and I cannot unless I draw another line… Please try to recreate this and see what you get and let me know. The object is perfectly planar, no small edges and by axis to check. There are no issues whatsoever to my knowledge with how I drew it, yet initially I can’t select the rectangle…

I can confirm this behavior. Moreover this bug exist in earlier versions too, but not restricted to Rectangle Tool, but can be reproduced with Rotated Rectangle Tool, as well as with Line tool.

The animations bellow I made in SU2017 Make, but looks similar in latest SU, even in a Web version.

(And no, the length snapping is not enabled…

Well known bug that has been around for a very long time, often referred to as the Bow tie bug. Always happens when a shape is only connected at one point.

This is a version of the “Bowtie Bug”, it’s been around for a long while. It is generally triggered by an enclosed plane that connects to another surrounding coplanar surface perimeter by only a single point, and as you experienced the symptom is the created face fails to intersect the original face. Retracing or adding edges is the general workaround fix.

It’s one of those things we know about and keep pointing out to people in the team, but it never gets fixed. Basically it is whenever you create a shape that attaches by one point it somehow sees it as two faces, or one face folded back on itself. You can replicate it easily as you see in the gif, add another edge to split the face and it will behave properly. [Single point]

This could be related to the ‘bowtie’ glitch: [image] It totally messes up face area’s. Try avoiding them by using the methods described

I these are known as “bowtie” faces. I tried the following without success. Sketchup.send_action(21124) # Run validity check tool #=> true Sketchup.send_action('fixNonPlanarFaces:') #=> true Both report no problems found. No change in the “face”. REF: Sketchup::Model # fix_errors · Issue #291 · SketchUp/api-issue-tracker · GitHub

Great feedback! Thank you everyone!!

As was said, this issue has been around for a while (SketchUp 8, or earlier). It is logged in our system as bug SKOR-213.