Hi folks, I’m a newbie at Sketchup, I’m trying to create a pushbutton cover like the picture, I’ve made the cap but can’t figure out how to make the inside parts particularly how to center the 1.3mmx3mm wide rectangular block to the 3.7mm x 0.6mm thick protruding tapered tab. this is a 12mmx12mm cap so its small 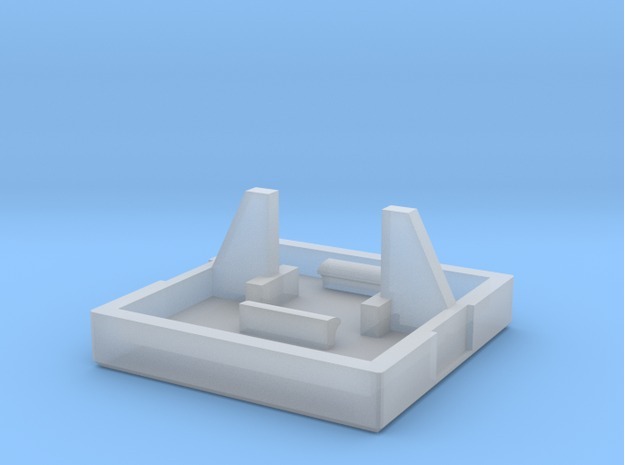 any help or hints appreciated

The model is pretty small, so you should scale it up while drawing and scale back down to real size when completed. Otherwise the shapes look pretty straightforward. Can you tell us more about what you tried and exactly what went wrong? Midpoint inferencing should make it pretty simple to center one thing on another.

Also, if you can upload your model here people can give you specific guidance.

Depending on how new you are, you might want to view this: http://blog.sketchup.com/sketchupdate/six-“rules-success”-SketchUp-beginners

Sure, How do I upload my models?

I’m extremely green… So I’m trying to get used to the commands and how the program works. I’ve already viewed many tutorials on youtube, looks pretty simple but hands on is a different story.

When you reply, use this button:

Question there . . How much can you zoom to the part where you want to add this tiny part to ? And maybe get a center of the spot you want to attach before zooming . . then Zoom and add the tiny part . . What does this fit ? Sounds like a computer key button of sorts and looks like the under side of one . .MAYBE Make the tiny part off the area and move to the Center of where ever is another Ideal . . I did this with some 3 D Text I added to a part As I did not like the spot where I put it down first . . And changed the size and the font also . .

sorry, is the “model” the file itself? or a picture of ?

no problem zooming in/out of the part. I don’t have the know-how yet to create the smaller parts to add to the bigger cap cover. its pushbutton for a synth and I cannot get these from the manufacturer as they are obsolete.

Do you have a dimensioned drawing you’re working from? Could you share that. This little tapered tab isn’t much to work on to show drawing the button.

To center the two parts, just use the move command, click the midpoint of one part, constrain the direction of movement by pressing an arrow key (here the up arrow constrains to the blue axis), and then move the cursor over until you find the midpoint of the other part. You will get a midpoint inference tip when your cursor is over it.

As another issue, the 3D template is actually not very useful. About all it does it bring in the makerbot component that shows you the bounds of what that printer can handle, which I deleted immediately as it just gets in the way.

the only thing the data sheet shows is the dimensions of the tab and overall size of the cap. Nothing about the inner parts. I had to measure the dimensions myself with a micrometer

So can you make a paper sketch to scan and share the dimensions you measured? In reality this button is fairly simple geometry and you should be able to draw it with just a few native tools.

somewhow, I tried to center but it would not snap to center of the rectangular part. This is such a small part I wondered if I could have used a regular template.

I can try putting something together, I need a bit of time though

You can certainly use whatever template you choose, and can even create your own by setting your preferred style, units, initial zoom, orientation, etc. and then doing File->Save as template.

If you watch my animation, you can see what I did. The only theories I can offer at this point are that you either didn’t wiggle the cursor around to find the inference snaps or tried to snap to some edge of the other part where you can’t see its midpoint.

By the way, I agree fully with @DaveR that this is a very simple model and, as such, is a pretty good first training exercise. So keep at it, tell us about your progress, and we will try to help (and try to resist the temptation to just build the model for you - which wouldn’t teach you anything

No, I fully agree. This simple pushbutton cover is simple enough to vreate and I want to learn how to design it myself, its just a challenge as I don’t know the program. I was not asking for anyone to design it for me, just simple guidance. I will continue and give you some update…
thanks