Some old ones, the files were in the SketchUp 5 format

Just for fun I tried doing one using the perspective camera. Not a perfect job, but it’ll do.

Very cool. Now how do you get SU to do that…?

The isometric ones can be done in a different way, because any bits that are sticking out towards the camera get flattened backwards, to complete the illusion. In my case I just cut a gap in the front piece.

I had thought of that as a possibility… Thanks! Now I just need to learn Anssi’s secrets!

We have enough problems helping guys who can’t make a 3d-printable solid !
Making a SKP that can’t even exist in the real world is a step too far !!

I joke of course, These kind of optical illusions are always very interesting.
Here’s a few Tesseracts

A case of drag-on dragon.

Some years ago I actually printed off a sheet and made a real 3d model of that very same thing, and it is spooooky !

Had built this Ames room for a TV commercial but do not think it would of been possible without SU.
SU allowed me to get the correct camera position and perspective as well as to figure out the the room shape. In addition it was possible from the SU model to create the flooring as well as the product boxes and the skewed graphics to wrap onto them.

Additional info and short video of how it was worked out here: 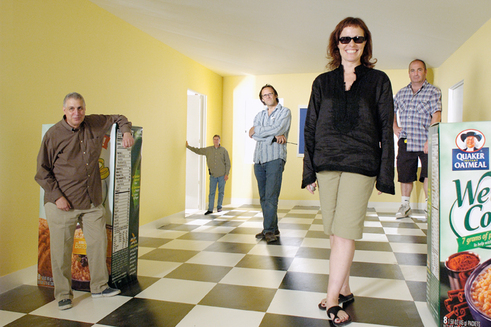 The Ames room effect is achieved by constructing a space with exaggerated geometry but which looks normal from only one exact position.  Usually this is a peep hole into the room so that one can...

They have an Ames room in the Escher museum in Den Haag. A must see if you like Escher - Escher in Het Paleis (Escher in the Palace), The...

Escher in Het Paleis (Escher in the Palace): A must see if you like Escher - See 2,144 traveller reviews, 966 candid photos, and great deals for The Hague, The Netherlands, at TripAdvisor.

It would be a serious challenge to reproduce some of those sinuous, Moebius-type illusions…even using some of TIG’s extrusion plugins.

the Escher museum in Den Haag.

Had to look through all the photos… Ought to go there.