Did you make the 3D Warehouse model public?
Here’s what I’m seeing in your post above:

Its public, there appears to be something wrong with the forum and links to the warehouse, the previews have been replaced with this image:

First look at the jack rafters: 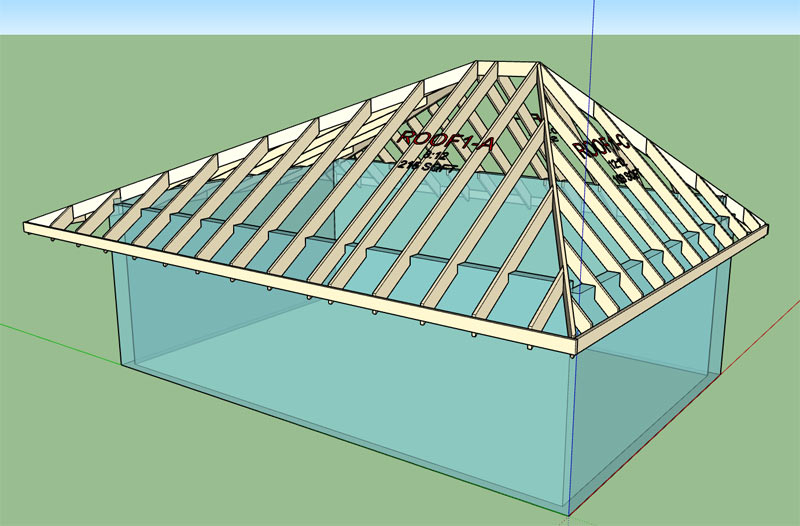 Next I will look at the birds mouth cut of the hip rafters and the soffit cut for both hip and jack rafters, then a bit more testing to see if anything can be broken when the degenerate case (symmetric roof) is calculated.

These is also the case where you might end up with a negative overhang (which doesn’t make sense). I should probably include some logic to try and detect this condition and alert the user that the roof configuration is not physically possible.

The bird’s mouth on side C looks a little troubling. I wouldn’t want to cut that much out. Do you have a limit on what will be left for the overhang?

The birds mouth cut algorithm (and code) is now functional however I can’t say I’m completely satisfied with it yet.

For example take a look at this scenario: 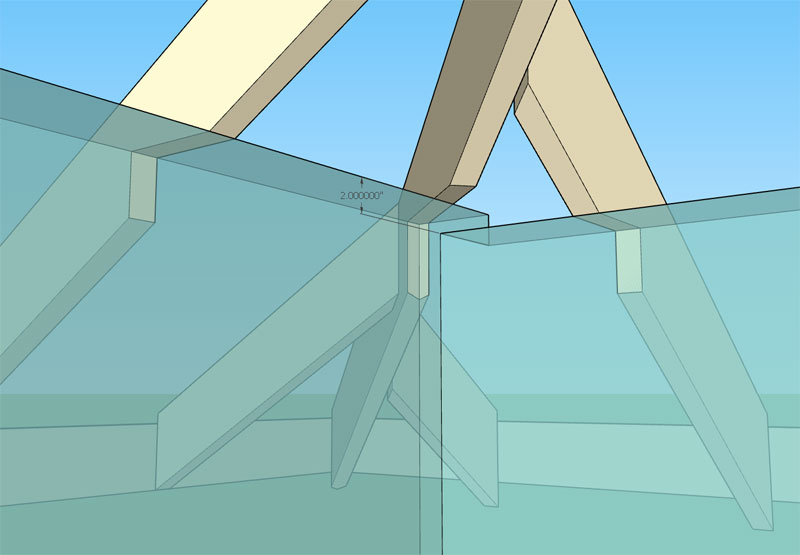 In this particular case it would seem to make more sense to cut the birds mouth at the lower plate height otherwise not enough meat is left in the hip rafter. This algorithm may need further refinement to really make it meaningful and useful to the designer.

The other option of course is to simply not cut the birds mouth in the hips rafters and leave it to the user to determine what or how they want to handle the intersection at this critical junction.

The soffit cut in the case of a hip roof is actually quite simple (surprisingly). Since the fascia lines up all the way around the roof the soffit cut will also be the same height for all jacks, commons and hip rafters.

The soffit cut function is now active for hips, jacks and commons: 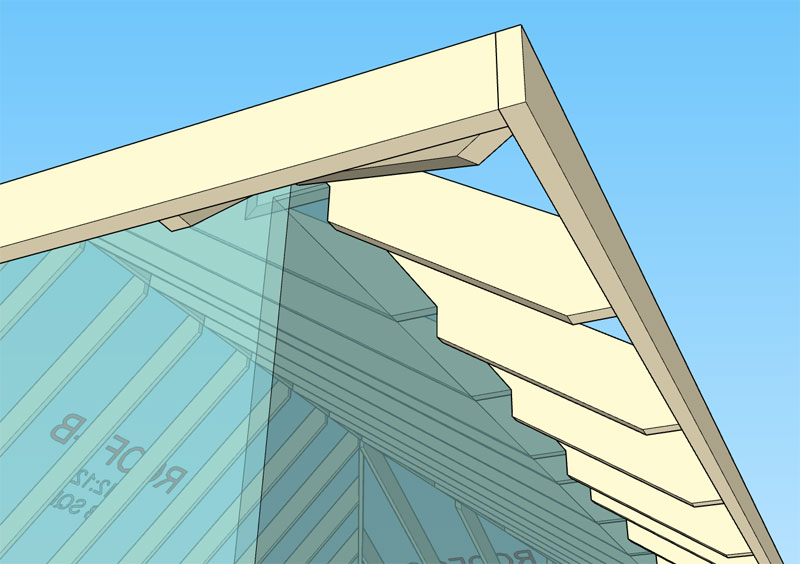 Now I will see if I can break the module, I’m sure there is some state or configuration that I haven’t considered that may throw some errors. 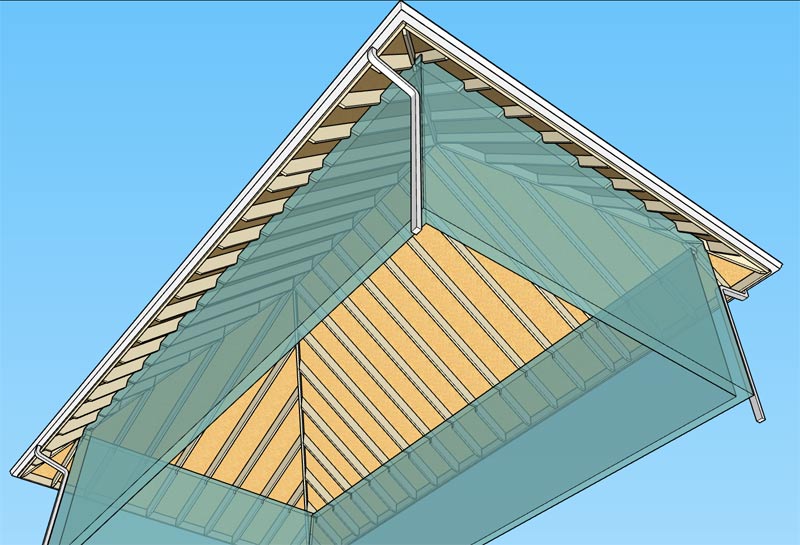 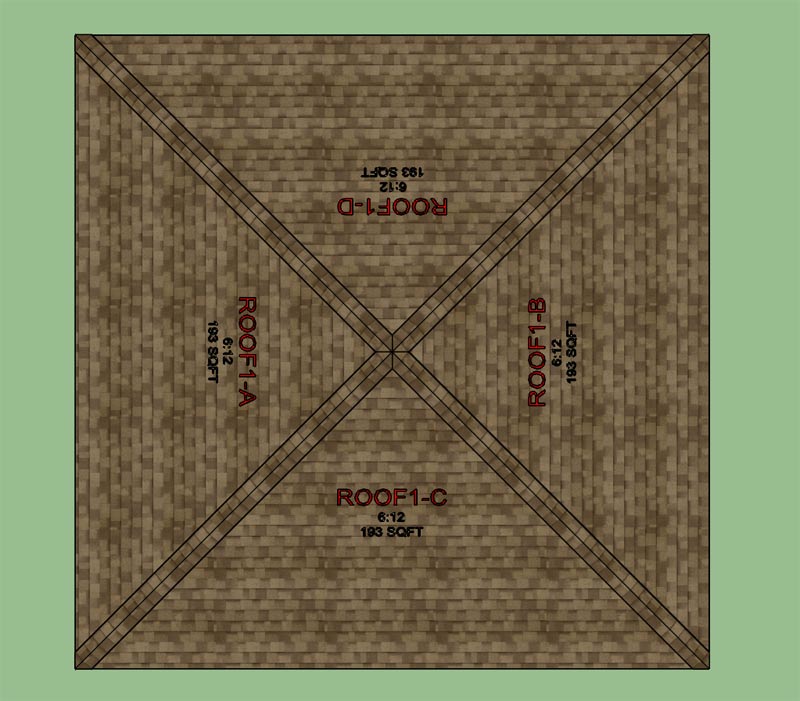 Items for future work include the ability to toggle the configuration where the sheathing centers up on the ridge board or not.

Another outstanding item is ceiling joists. I’m not even sure what do with ceiling joists yet for an asymmetric hip as there could possibly be four different ceiling joist heights.

I would also like to switch everything to HTML menus. The initial draw menu is still using the default SU GUI. Due to its limitations you can only initially create symmetric hip roofs but then you can edit them to switch them to an asymmetric configuration. I will explain this further in an upcoming tutorial video. Once I switch to an HTML draw menu this limitation will be resolved.

Download or view a sample of an asymmetric hip roof here:

I’ve fixed a few small bugs with the jack rafters near the corners and re-released the plugin.

When the jack rafters approaches a corner and then the overhang portion of the roof the various permutations in the way the jack rafter is beveled or cut becomes quite interesting. With a regular symmetric hip roof the possible configurations is more limited and predictable however the asymmetry lends itself to additional cases, so more conditionals are required in the code to account for them.

In this video I try to explain how each roof plane can be adjusted and the details of toggling between auto calculating the overhang or the top plate height.

I also need to update the estimating module for this roof type (symmetric and asymmetric), the quantity and length of each jack rafter would be useful information.

Giving some thought to the secondary roof tool:

When a secondary roof is edited or regenerated it will then re-analyze the entire geometry with the specified primary roof and roof plane in order to generate the secondary roof geometry. This will allow the user maximum flexibility (ie. moving primary and secondary relative to each other {x, y, or in z} as well as changing the primary).

Orthogonal intersections are nice but we can’t count on them so from the get go the secondary tool will be designed with any arbitrary intersection angle in mind as well as intersections with a roof planes or gable ends of a gable roof (wall).

Additionally, the secondary roof may be symmetric or asymmetric so it makes sense to also allow for this possibility as well.

One could even go so far as to allow for intersection with more exotic primary roofs (eg. gambrel, arched, polynesian etc…) however at this point I think I will limit myself to just a single pitched roof plane or wall plane.

There will be a separate tool for secondary hips and one for secondary gables, the reason being the vast number of different parameters required for each type of roof and the different algorithms required as far as calculating the actual roof rafter geometry.

At this point I am mostly conceptualizing and trying to see if there are any major holes or flaws in this system or method of secondary roofs. I would be interested to hear your feedback on the matter and especially if you can see any major problems with my methodology, or have suggestions for something that may work even better.

As can be seen on my previous notes page (May 14), there are a few special cases that will also need to be dealt with:

1.) Secondary roof is non-orthogonal to the primary roof and its ridge coincides or meets a primary hip. In this case the secondary really should intersect the two planes on each side of the primary’s hip.

2.) A hip roof secondary meets a gable wall such that the aspect ratio of the secondary precludes it from having a ridge board perpendicular to the gable wall. There is also potentially the non-orthogonal possibility but this would not be very common.

3.) Typical L-shaped hip roof where the valley and hip theoretically merge into a common roof.

If I can somehow pull this one off, it will be a bit of a game changer for the Truss plugin since it will then allow for much more complicated rafter roofs.

However as I am reviewing my notes and previous posts I came upon one unresolved question.

Should the roof sheathing extend out over the fascia board or should it terminate at the sub-fascia as shown in this detail: 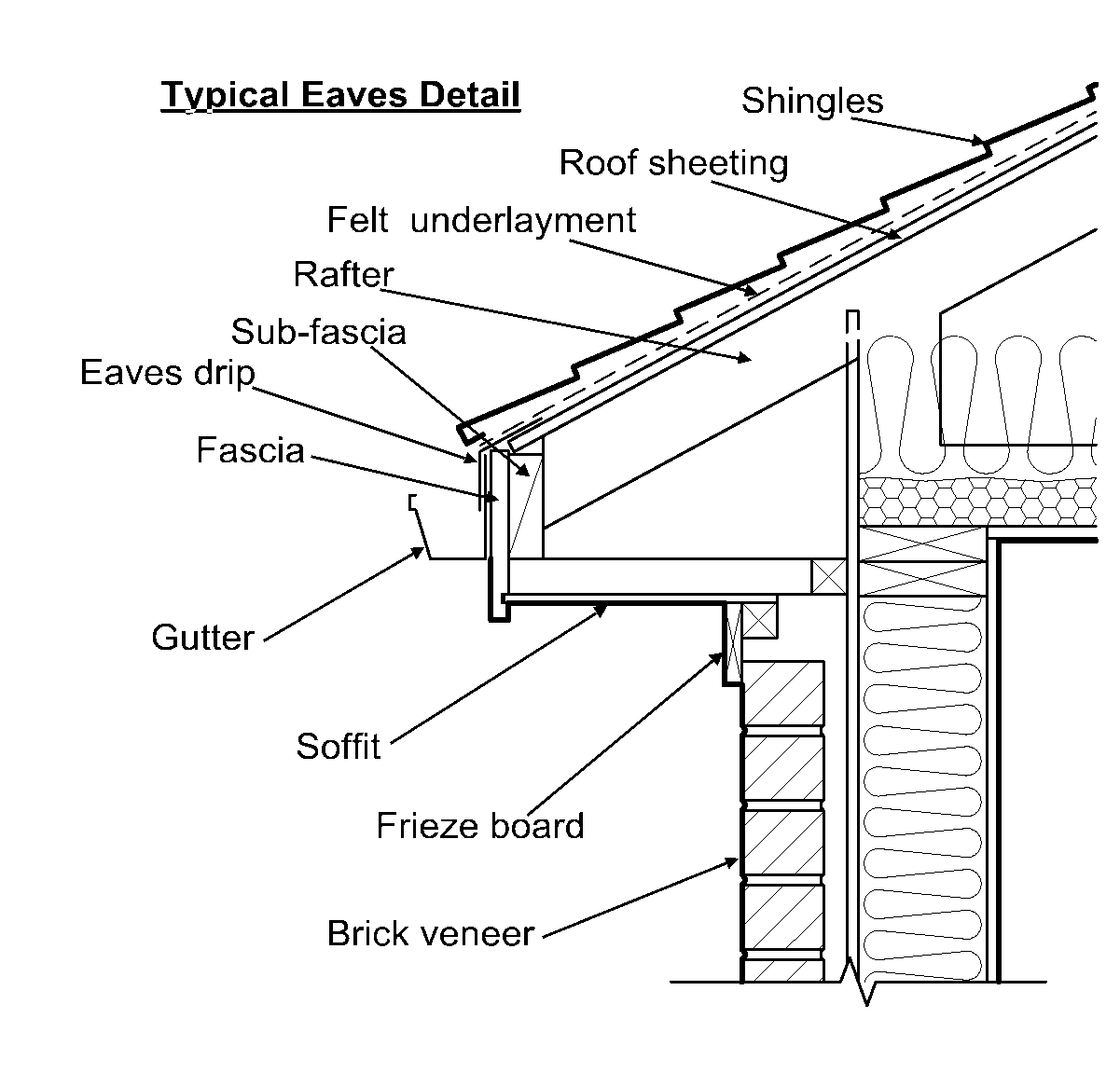 I can have it work either way but I would like to focus on the most common configuration.

Most of the time I make the bottom edge of the sheathing even with the top corner of the sub-fascia.
This way, the builder can go with the more formal arrangement as in your detail or go with coil stock fascia and vinyl soffit. The drip edge can cover the gap if one is left.
Here’s a clip from a less formal building I’m working on now.
Shep 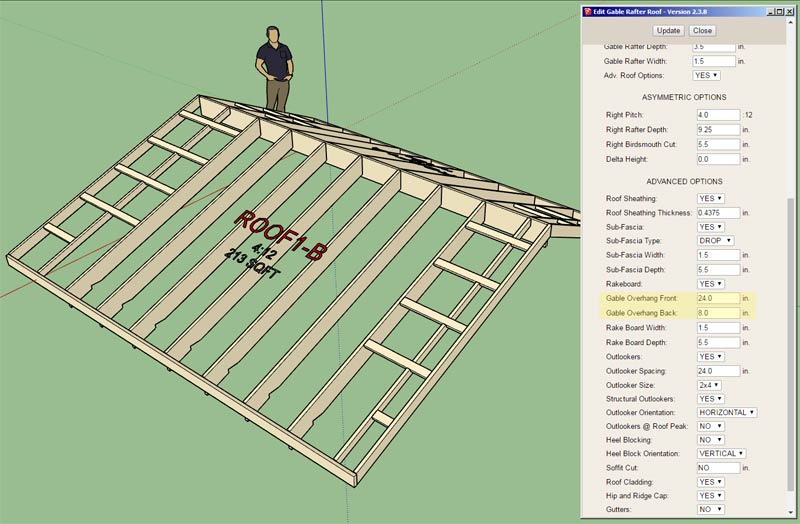 The issue with the rear outlooker length will also need to be addressed for truss assemblies.

I should also make the option for the separate front and back overhang length available for trusses as well. Lots of little things as well as big things to do.

The consensus seems to be that the sheathing should terminate at the sub-fascia and not extend over the fascia, especially if the rafter tail is a plumb cut (fascia is vertical). However, this preference also seems to be highly dependent on the particular application and type of fascia used.

Here is another interesting detail: 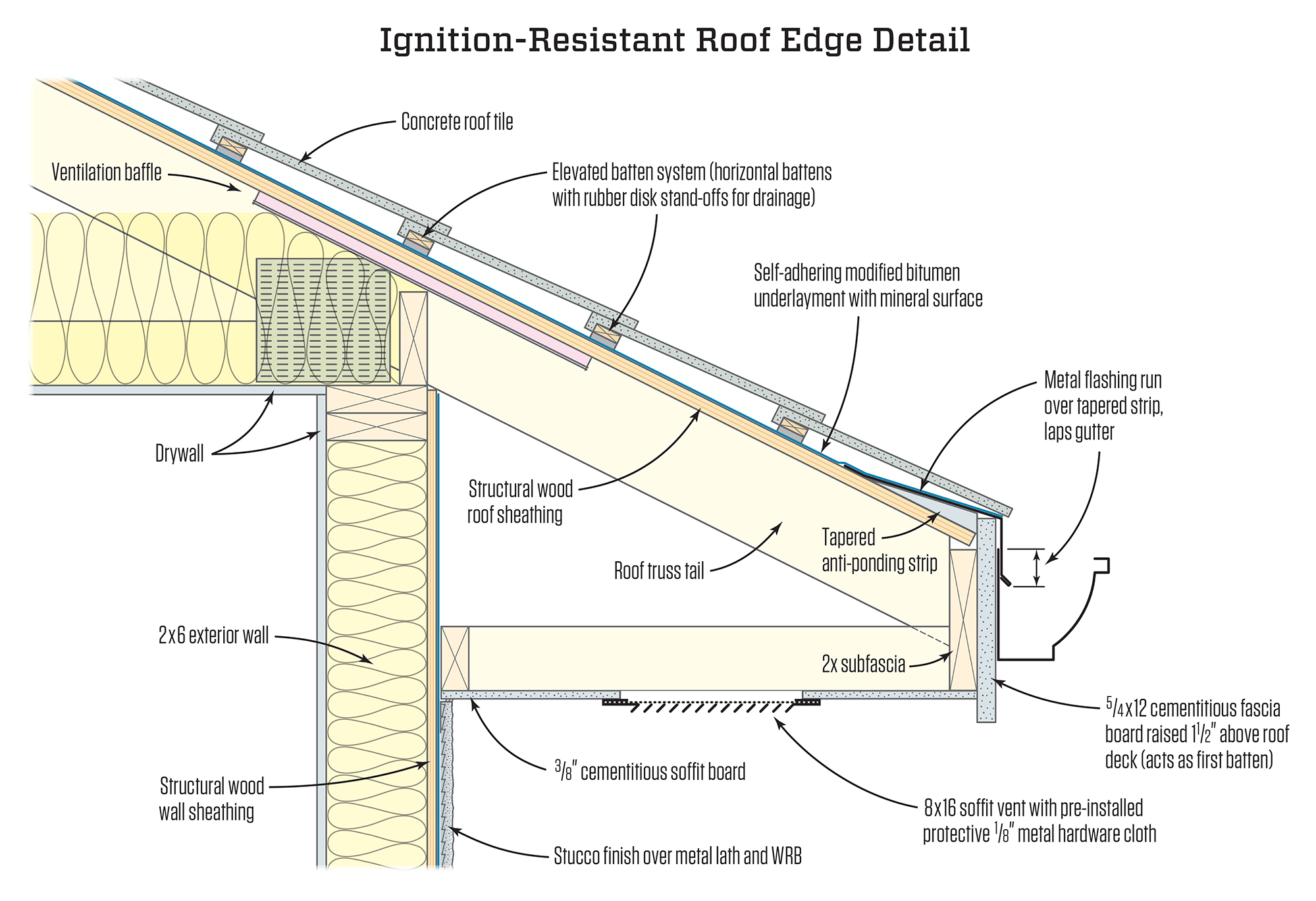 A few other things to note with regards to fascia and soffit:

1.) In order to enable soffit and fascia the advanced options must be turned on and the sub-fascia option must also be turned on.

3.) Gutter placement will then be unaffected by the fascia other than be offset by its thickness.

4.) The soffit will be placed level to the horizontal and extend to the outside edge of the sub-fascia meeting the fascia and to the wall sheathing. Since the plugin is not keeping track of what walls are being used (Medeek, Framer, or a simple solid), there will be a wall sheathing offset parameter that will allow the user to control this offset. I’ve noticed some details showing the soffit extending to the framing, others to the sheathing and still others to a brick or stucco layer.

5.) The soffit top surface will abut the underside of the sub-fascia.

6.) Materials for soffit and fascia will both be user driven/customizable.

8.) I will also be adding in an additional parameter for the roof cladding which allows the user to extend it beyond the sheathing a specified amount (Roof Cladding Extension). This will naturally extend the ridge or hip caps the appropriate amounts as well.

I realize there are other soffit variations but I will be starting with the flat soffit first and then consider the angled soffit in future developments. 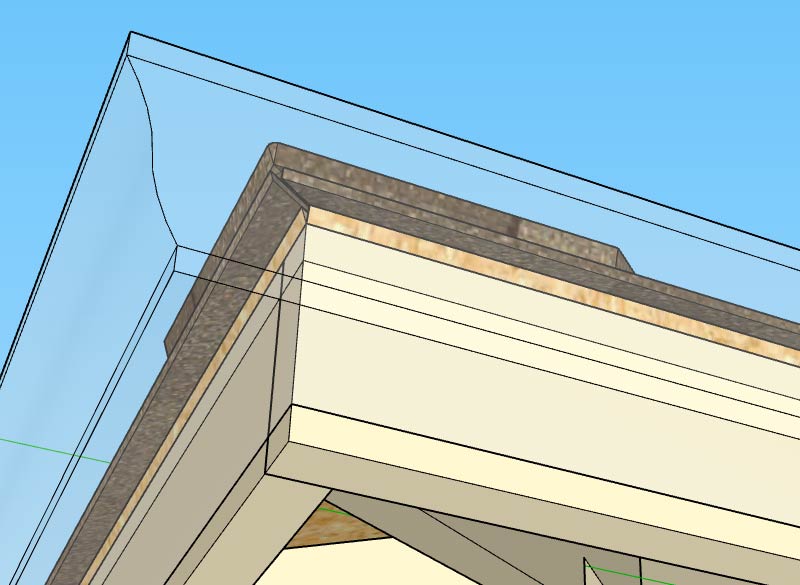 The extension is measured inline with the roof plane (not with the horizontal).

First look at the soffit and fascia (hip roof): 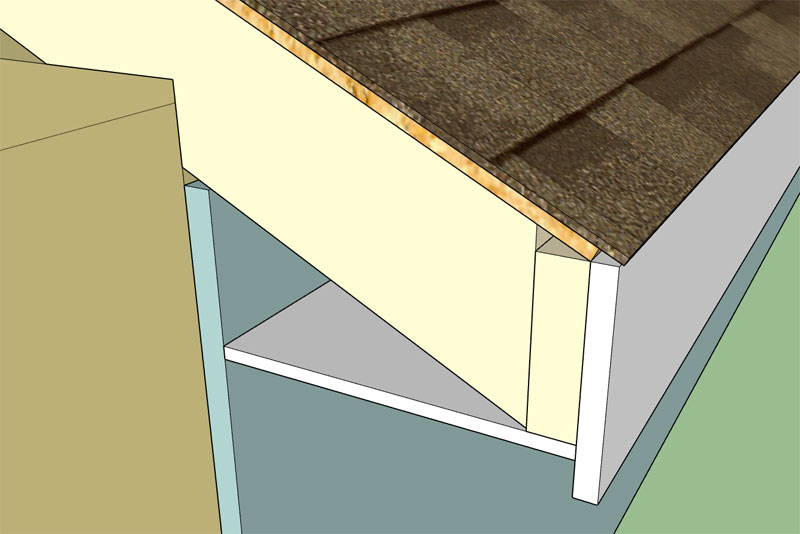 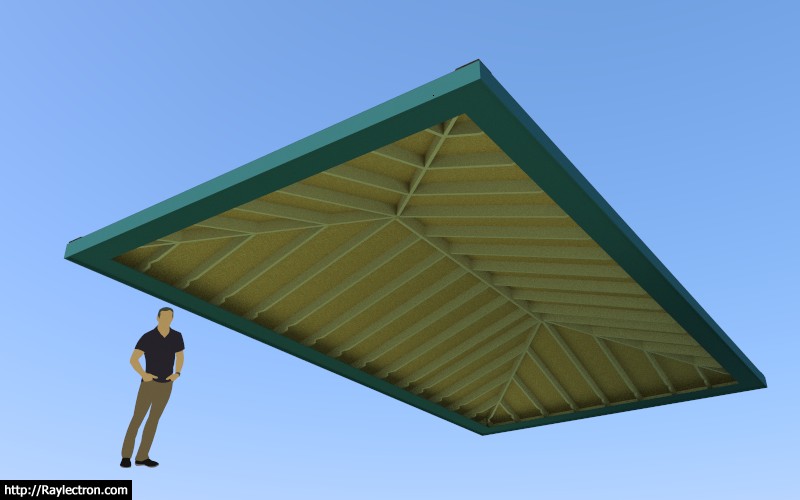 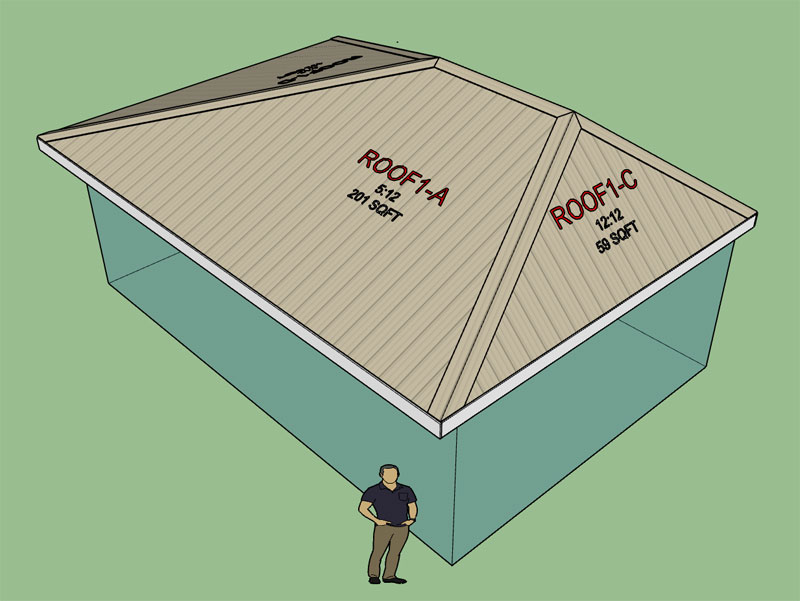 Custom materials is also enabled for both the soffit and the fascia. Soffit and fascia can only be specified in the edit menu once the roof is created. The current draw menu presents the user with far less parameters and will be updated to a more advanced HTML menu in the future.

Once I am satisfied with the soffit and fascia with the hip roofs I can then extend it to gable, shed and dutch gable roofs and all other truss roofs.

I’m considering adding in drip edge but then again it may be a step too far? 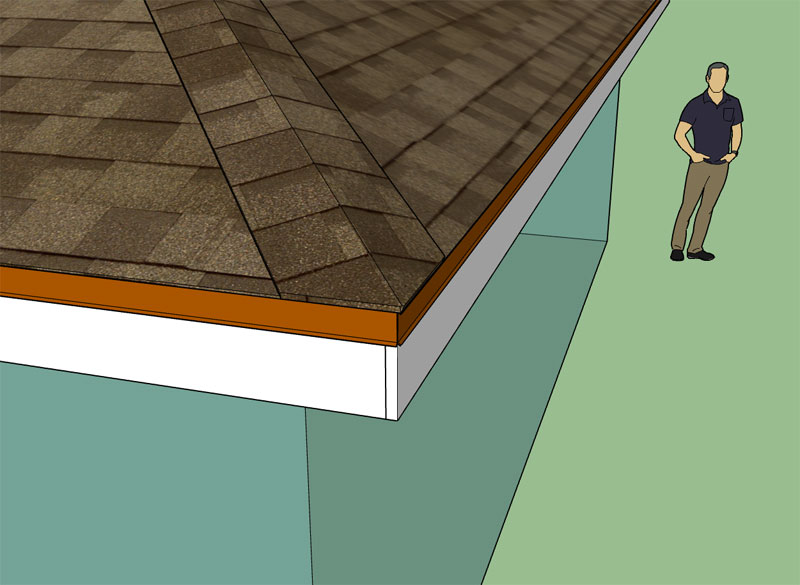 If gutter is enabled then the drip edge is barely visible. For estimating purposes I can just calc the perimeter of the roof to get the lineal feet of drip edge. Is it worth the effort?