ahhhhhh ty been fighting for over an hr!

I don’t have a half hip (rafter roof) setup yet however there is probably a workaround by combining a gable with a hip and then using the trim tool to manually trim some of the rafters, however I haven’t really tried this at least not for a real design.

I took about 10-15 minutes and tried creating a half hip with a gable and hip roof as primitives. Using the trim tool made it fairly easy to clean up the rafters, see results here:

Since the end result is not parametric you will want to be sure that you have all of your rafter depths, overhangs etc… set before you dive into the manual editing of such a roof.

This is obviously a painful and slow process. Conclusion, I need to add in a half hip rafter roof.

In regards to this post (Jun 19th), say I wanted create a customized TJI floor:

What is your recommended work flow?

-enable layers and materials
-create a rectangle that fits inside
-edit the groups/components to fit
-name the customize items (ie. TJI joists, rim joist, etc) to custom ones

Would that allow one to edit the floor after the fact? Ie. swap out different TJI heights?

Also, what is your recommended work flow for odd shapes like the following?

At first glance I can see 2 methods:
-smaller rectangle method above
-multiple rectangle with no rim joist overlayed on joist centre, rim joist added on its own (would “double count” joists in some estimating programs but look ok)

As it currently stands the floor joist/truss module in this plugin is very rudimentary and rather limited. I need to spend some more time on it and provide the ability to create floor layouts for any building (irregular) outline. Right now it is limited to a simple rectangle.

Also the ability to do cutouts (holes) for stairs and other openings is the next big item on the todo list.

For now I would just create two floor assemblies and the manually trim and adjust each one to fit the structure. The TRIM tool of the plugin will come in handy for this.

This is a fairly minor fix/patch.

This next week I plan on returning to the multi-pitch hip roof and start back up where I left off a few months ago. I am also going to be adding in the custom material manager so that the truss plugin has the same capabilities as the wall plugin.

After that the next big push is to make all of the rafter roofs parametric with HTML based edit menus similar to the common truss edit menu.

While all this is going on I would also like to complete the stair module of the wall plugin. A lot of things to juggle right now.

A number of other “under the hood” updates (to numerous to list) were also incorporated to bring the code more in line with the wall plugin and its more efficient and modular organization scheme. 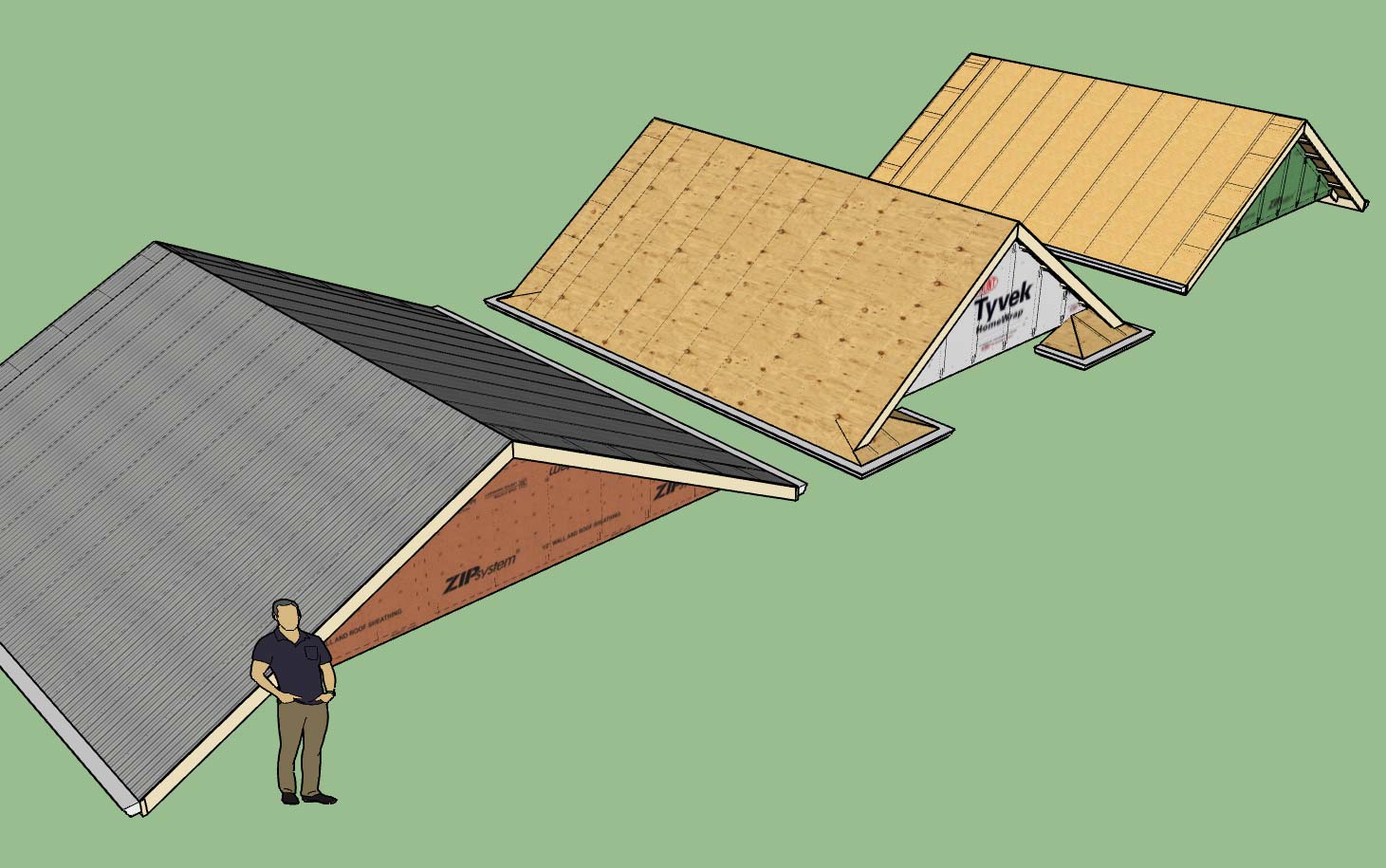 Also note that the custom and expanded materials selection is only available for common truss shapes (ie. common trusses, scissor trusses etc…). I have not yet implemented the new system for other truss shapes and rafter roofs, that is work for yet another day.

There is still a tremendous amount of work that needs to be done with this plugin. Many of the specialty truss shapes do not even have advanced options available to them yet. All I can do is keep hacking away at it and maybe one day I will have the resources to really push this thing along. 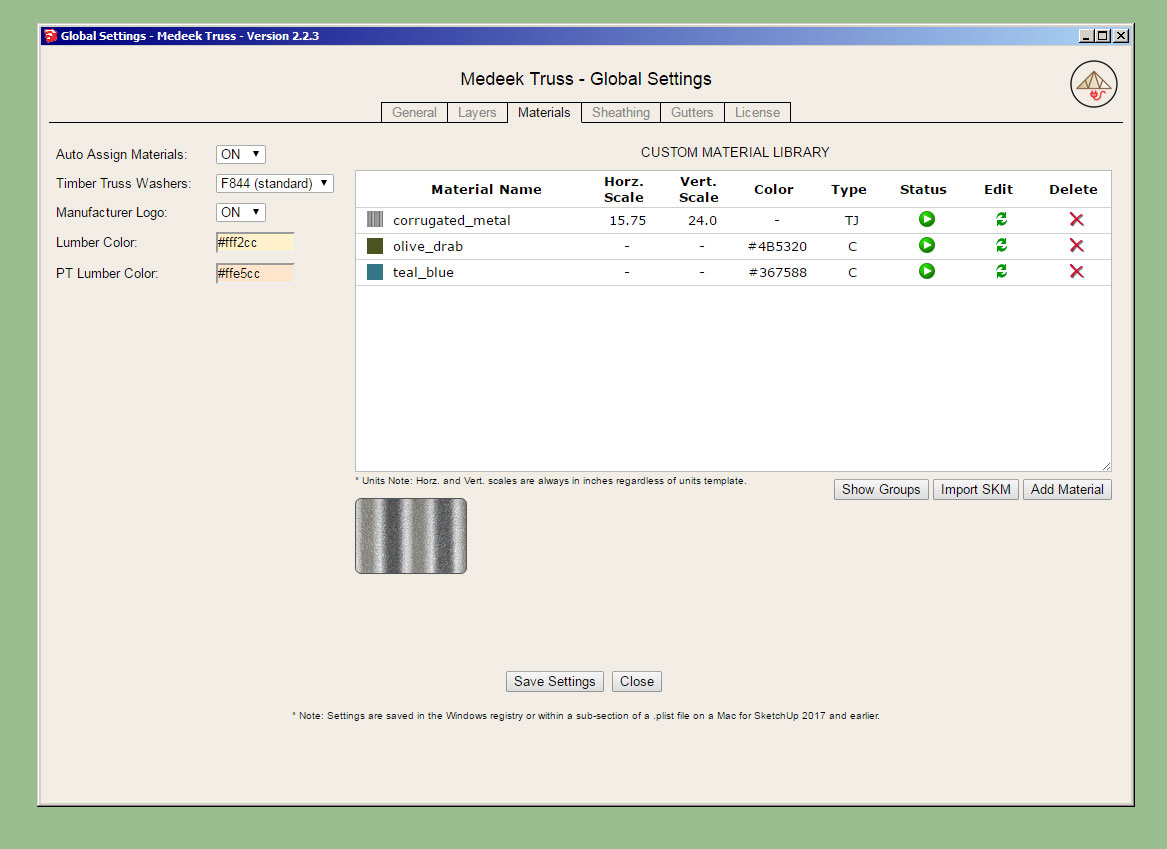 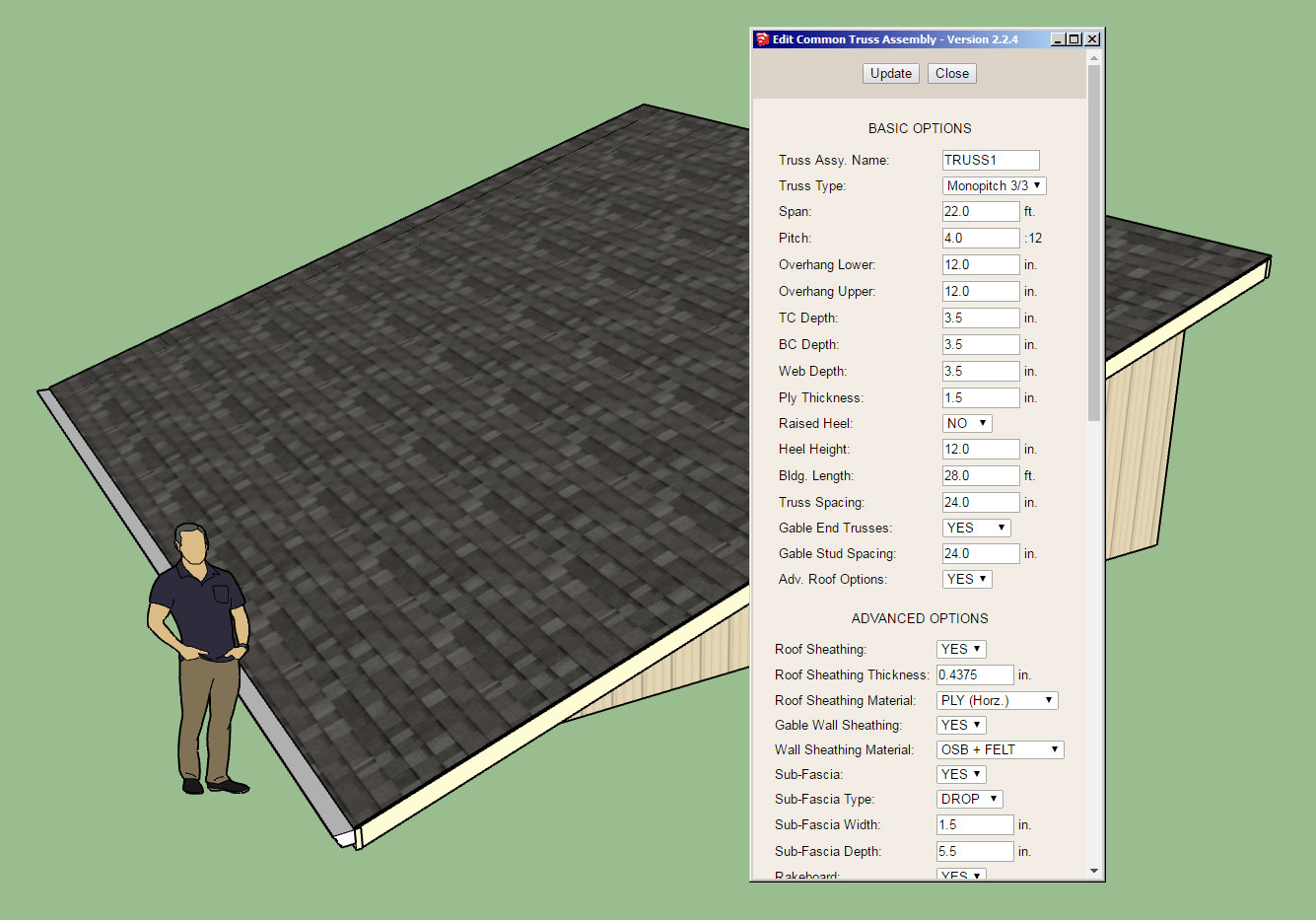 I still need to add a few more advanced options to the monopitch truss type:

I’m also thinking about adding an insulation option for the ceiling for trusses and rafter roofs so that the truss plugin is up to speed with the wall plugin. Some additional feedback in this regard would be helpful.

With monopitch trusses there is also the issue where the exterior wall corner is created by the truss assembly and hence I need to apply some corner trim on these corners. I will give this some more thought.

Even though this may appear to be a minor revision it is actually a critical fix/upgrade for users running on Mac and Windows 10.

The advertising banners would only load intermittently and hence would cause the HTML menus to not render (blank white browser window). After giving this some more thought and deciding that the advertising revenue generated by the plugin was not a significant amount, and a less cluttered look is always more appealing, it just made more sense to remove all of it completely.

I’ve also updated the license tab to be up to date with the Wall plugin’s license tab.

This same issue with the advertising banners in the global settings also plagues the Wall plugin. I will be issuing a new revision for it in short order, that strips the advertising from the plugin. I appreciate everyone’s patience in this regard.

I’ve recently been thinking about the multi-pitch hip roof again. Eventually I needed to return to this topic since the designer needs the flexibility of assigning different pitches to the various roof planes.

When you have a hip roof situation and the pitches are different on adjacent roof planes yet you want to maintain the same overhang and line up the fascia then the wall top plate must change. However with trusses rather than change the top plate you simply have to raise the heel of the truss on the low side until it equals the height of the adjacent side.

Does anyone have any shop drawings of an asymmetric hip truss set they can send me. Specifically I am looking for a hip truss set that has different pitches for front and back and then possibly a different pitch on the ends. I have my theories on how such a truss set should be put together but it is worth the effort to study this a bit further and verify.

I’ve really got to get complex roof framing figured out. The workaround does work (per the video), but who really wants to work that hard? My inherent laziness is what drives me to create these tools, which in turn help not only myself but everyone else who would rather spend 5 minutes designing a roof rather than 4 hours.

I would rather be spending that time playing a game of chess, cooking a good meal or watching a show with the wife.

It does do that already however I am trimming groups that reside inside of a component. I guess what I need to do is check to see if the group or component I’m trimming resides within another group or component and then make this container unique as well. Not sure how to do that yet but I will look into it.

P.S. However, you may not want it to do that you may want it to preserve the top layer component so if you trim all of the heels of a common rafter they all get trimmed. I’ll have to give this some more thought.

Sure. It was just an idea.

This additional trim function will be helpful in trimming more complicated geometry like hip rafters and triangular pieces of roof sheathing or cladding.

Similar to the regular trim function this tool can also be utilized on any non-plugin geometry so long as it is a (solid) group or component.