I downloaded a model of a KW Dart aircraft fueling truck as an obj and imported into sketchup. Some camera angles I can get close to it, enough to put a livery on it. In its current view when I open the model, the second I scroll in, the model disappears. Sometimes I can get it back going to an iso camera view but not in the current orientation of the model. I have tried hidden geometry and then hidden objects, trying to see if there is something I am missing.

Anyone have an idea or solution for how to fix it. I have the same issue with an Oshkosh H series airport plow. That was also imported as an obj from turbosquid.

Is the camera set to Parallel Projection? How far from the origin is the model?

I try to change it to perspective but it changes back to parallel projection. The two-point perspective isnt an option in this model. I read about zoom extent, so I might try that

Attach your model and we will probably find the source of the clipping.

You appear to have scaled them without correcting the definition’s scale. How long is the one with the blade supposed to be?

Try this. Right click on the object and choose Scale Definition. Then you should be able to zoom and pan without losing the object. You’ll also need to rotate them and move them up to the ground plane.

Are the files really as big as they need to be. I didn’t download them due to their size.

They are excessively detailed. I expect they could be cleaned up extensively without hurting anything.

Annoyingly all the edges are hidden so the models are difficult to work with. 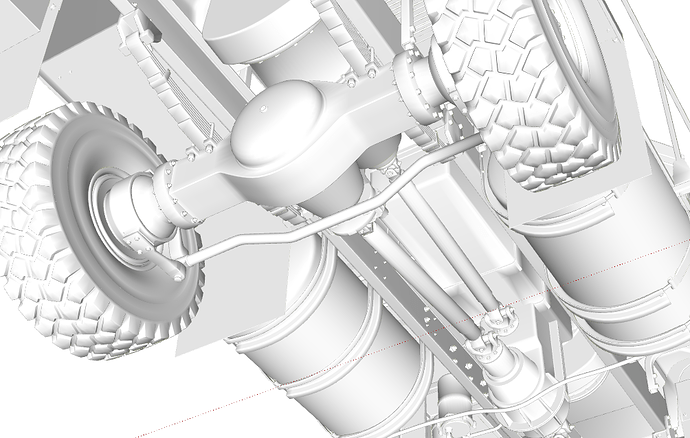 They are very huge. I downloaded them for my airport model, which i am buying in real life. I can take out a lot of the internal stuff that nobody would see anyway.

Since you want to add these to your airport model you should get into them and be brutal about stripping out the unneeded detail. If working with one of these is slow on your computer, all three of them plus other stuff like aircraft and buildings are going to bring your computer to its knees.

You are absolutely right. I have a big complex model and these work fine but disappear when I move an inch

Did you scale the definition.

Trying to figure that out now. the scale was massive. Like 400 feet across. Appreciate the help, i’ll get myself sorted here let you know how it goes.