How to make this simple design

Trying to make a pvc tube 120mm long by ID38mm x OD40mm which cones out to OD44mm but inside it is a square that has been hollowed out by 38mm square and 40mm deep with a removable end cover, basically its to hold a camera inside the square and it can see all the way though the pvc tube.

Can anyone help? Using Sketch up Pro 2016

Here is a pic of the insides for the camera but trying to install that into the pvc so it looks all round from outside, not round then into a square at the end of the tube. 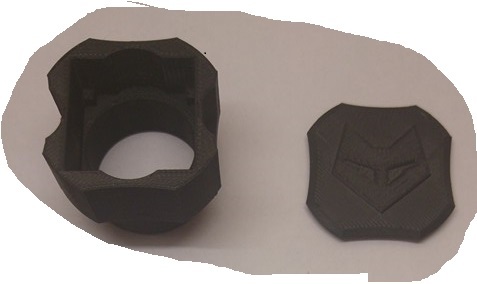 I’m not completely following everything you said, but this would be relatively simple using the Solid Tools toolbar (boolean operations). Getting the logo on the “cap” is a bit of a different story, but the body is pretty much just basic shapes subtracted from other basic shapes. Does that help?

This is the shape I’m trying to do.

I’ve tried drawing this, but I can’t make sense of the dimensions.

I THINK you mean that the camera hollow is a 38mm square, with circular segments cut out of the edge at about 22m Radius (44mm diam), which makes sense.

But what is the outside diameter of the round parts of your left hand picture?

If I draw a tapered cone, starting OD 40mm, ending OD 44mm, I can’t get the hollow shape to fit inside it. 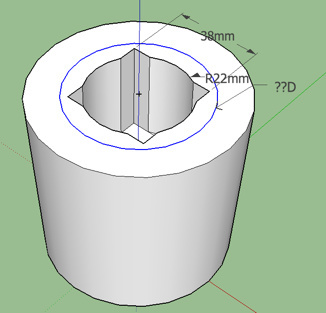 This is what it looks like with the outside cone far too big.

To make the shape, draw a circle at the origin of the OD of the pipe (I worked scaled up 1000x to avoid small segment problems which you may otherwise face) using metres for mm. PushPull the circle up to the height of the cap. R-click on the perimeter of the upper end of the cylinder, select Entity Info (if that window isn’t open already) and change its radius to a bigger one to make the taper.

Draw a circle on the top 44m diam (22m R). Draw a square with the polygon tool (set 4 sides) pressing Ctrl (Option on Mac) to get it to make it circumscribed round a 19m circle.

Orient it along the red axis.

Remove arc segments inside the square. Push pull down 40m. That gets you your hollowed out shape where I assume a small camera goes.

But as I said, I can’t make sense of your dimensions for the hollowed out section in relation to the OD of the part it fits in. What size is that? 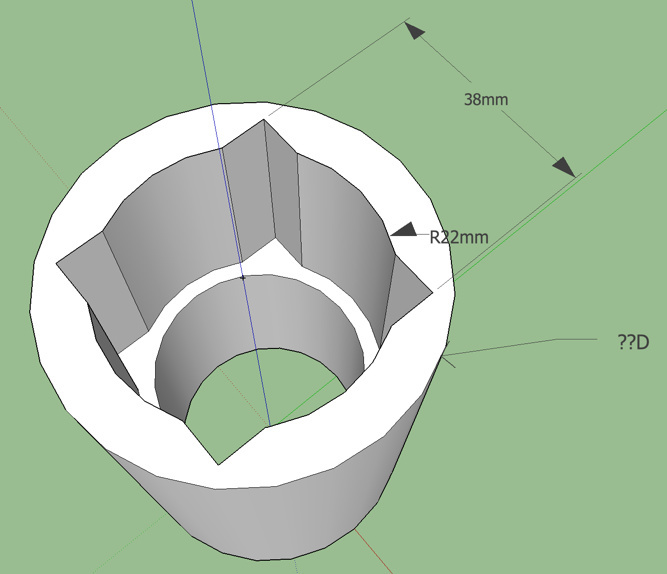 And the inner diameter is a clear 38m.

Or should it be 40m to fit outside the straight pipe?

And if so, maybe the top radius labelled at R22 should have been only 20?

Let me try that and post another model soon - have to redraw the hollow from scratch. 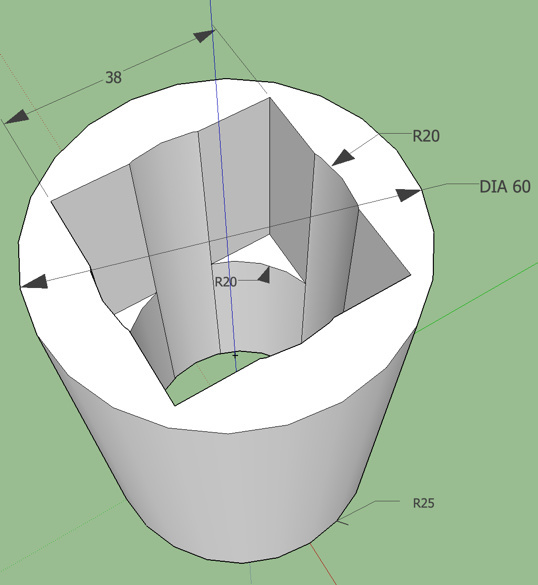 That is great! well done. I have so much to learn, you are the best!

If you want to 3D print this, you should use circles with more than the default 24 segments - otherwise it will look like the drawing - obvious flats. Guessing, I’d say try 96.

And getting the logo on the cap could be easy - draw the shape then pushpull it into the surface by (say) 1mm or less, depending on how prominent you want it to be.

Make the results of your drawings into Components, then scale back down by 1000x with the Tape Measure or Scale Tools.

Yes need to print it… I can send this off to a company who will print this for a fee.

I’m still not very clear what you want the outside of the part I’ve drawn to be shaped like. Tapered as i have drawn it? Cylindrical? Like the picture with flutes to get a grip on?

And does the piece with the logo on it go on top of what I drew, to enclose the camera?

Could you draw a clearer cross section of the finished piece(s)?

Yes cover is to enclose camera.

The shape you have done is fine mate.