How to make my object whole?

You can make your window unit a “component” and put the axis in the right spot on the component and make sure it is set to “cut opening” and it will cut opening in a surface you put it on (you can specify vertical too), much like window and door components do. Or once you have your window unit in place on a surface you can just select the surface it sits on and draw a rectangle for the opening and then delete that face.

simple tutorial that explains it. 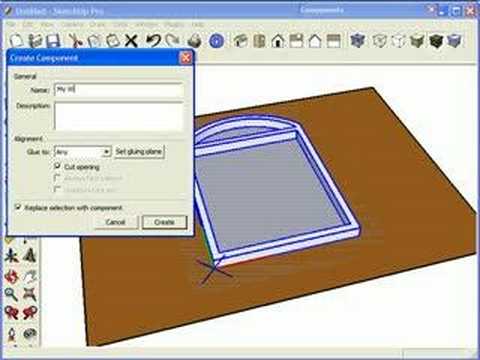 So I finally succeeded at making my first mould! 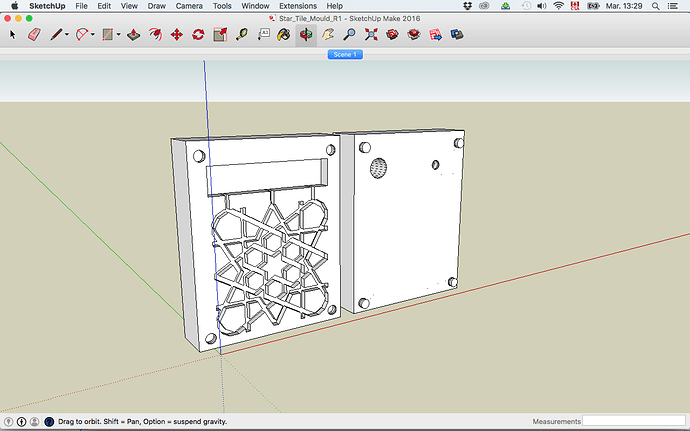 However, now I’m trying to do it again for another mould using a different shape and I can’t get it to intersect properly so that I can push the shape in the block no matter what I try. Can someone help me figure this one out? 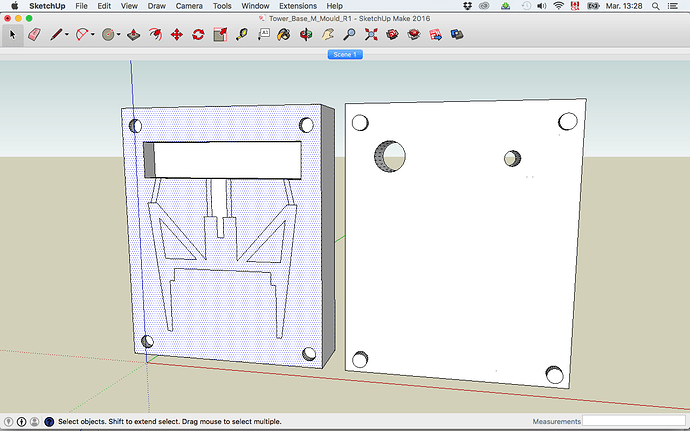 I don’t know how you managed it but there seems to be a lack of planarity. Notice the Y values of the coordinates. 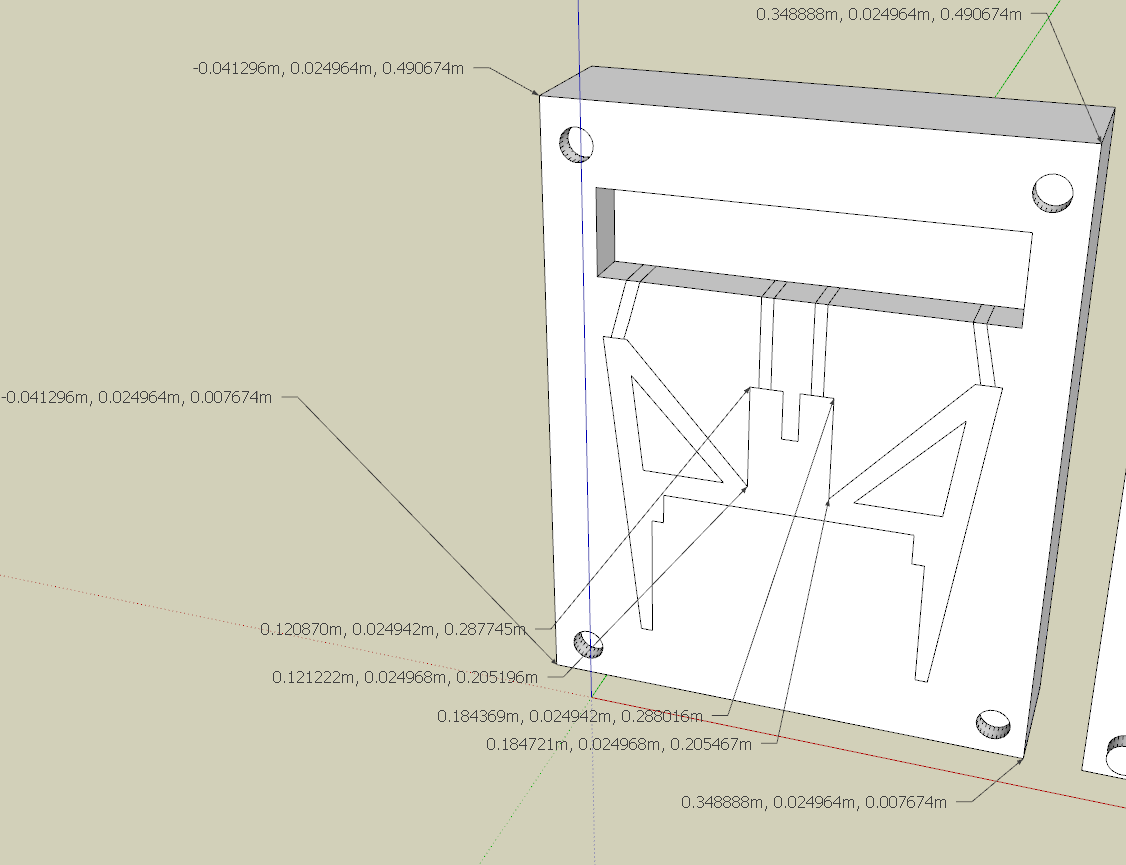 You have edges that are not on the surface so those edges won’t divide the surface.

Dave beat me to it with the same observation. The subtle thing is that the off-plane items are so close to on-plane that the edges are bleeding through instead of being obscured by the front of the mold. That makes it hard to spot the issue! You were probably not paying close enough attention to inference snaps while creating the edges on the front face.

Ok, thanks for the quick reply guys! Is there a quick fix to this or I have to start all over again?

It seems like an easy enough thing to draw, I would start from scratch. I think it would be faster than trying to fix what you’ve got.

I would suggest you turn off Length snapping and set your precision higher than you have it currently. Maybe work in the proper units, too. (Window>Model Info>Units.)

I agree with Dave. Trying to fix tiny misalignments can be way more difficult than trashing it and starting over. The same problems that cause pushpull to fail make it very hard to select and move the necessary items.

I started to redraw it but the dimensions in your model are really strange and difficult to work with. Many of them extend five or six places beyond the decimal when the units are set to millimeters. Surely you don’t need those kind of dimensions, do you? And because of the way the existing model is, I can’t tell what you actually intend as the right dimensions. If I had them this would be less than a 10 minute exercise to redraw.

Yes, that might be because I copied and pasted the model drawn in imperial units in another template that was set in metric…

Here I’ve redrawn it and I kept it the imperial template this time but I still have a hard time wrapping my head around the apparently easy steps needed to get this shape engraved into the block.

Any other advice that could help me understand how to do this?

You’re so close. The group just needs to be moved back to lie on the surface or the die block. then explode the group and pus the face inside the pattern back into the block. 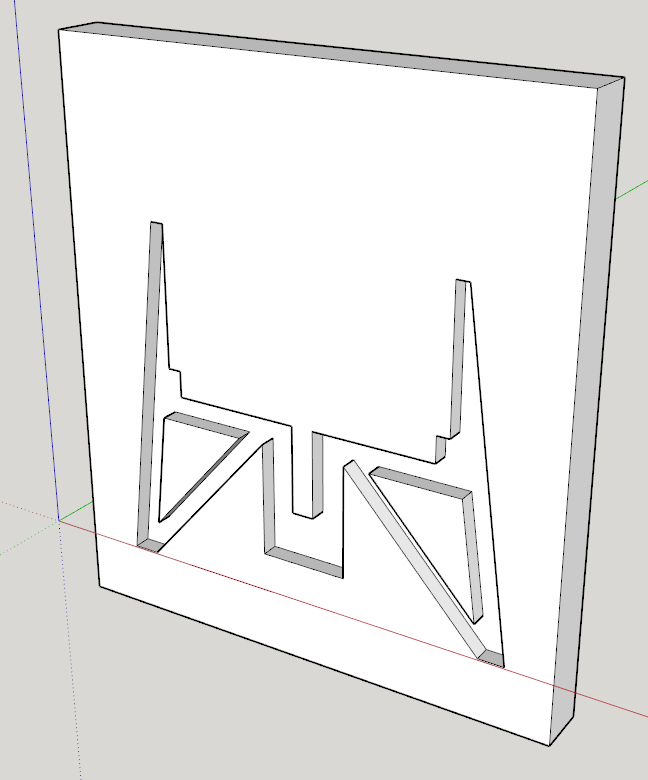 Is there a way to make sure that the groupe really lies on the surface of the block? Because I thought it was.

Just pay closer attention to the inference engine tooltips as you place the group:

Ok I see! The area inside the two triangles is grey and pushes don’t with the rest of the shape leaving only a thin wall. Why is that? I need this area to remain full and at the block surface level… 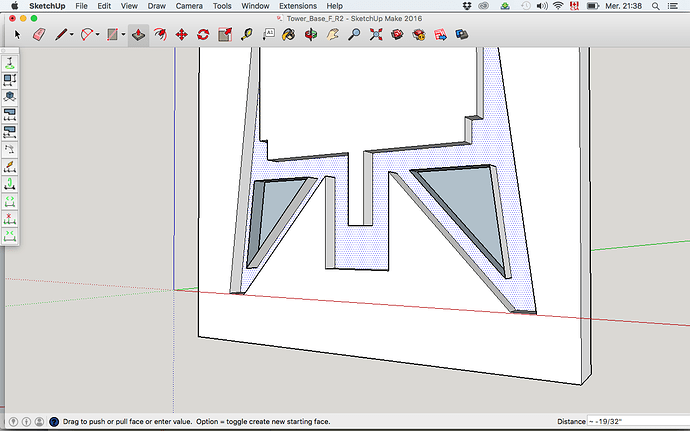 Just trace over an edge on each triangle to heal those faces.