I was watching Tyson’s live model of a Desk Lamp and thought his use of components was really instructive of their potential. Being able to add detail to the wood/metal bracket away from the component and then see all of those changes “just happen” to all the instances in the entire model was a pleasure to watch. I think my students would really benefit from seeing and having this experience.

I have two ideas to make this happen and I would appreciate some suggestions.

It is obviously possible for your suggestion to work for both ideas, but I just wanted to make sure you were fully aware of their use.

I frequently leverage the power of components in my modeling work. Pulling a copy out to work on is one method I like. Another, when I don’t need the neighboring componets as a reference is to hide the rest of the model while editing the component.

There’s also a thing I do when modeling small objects that has become known as the Dave Method (I’m not real sure who started calling it that) which involves making a copy of the original component, scaling the copy up and editing that. Once finished with the editing I exit edit mode and delete the giant copy. This eliminates the issue of missing tiny faces. This little knob was modeled that way. 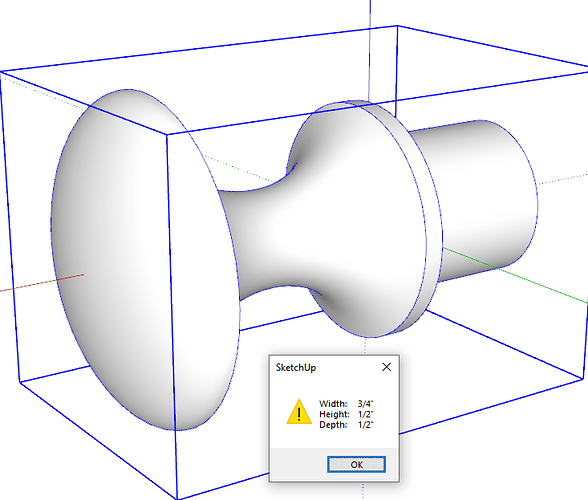 Another way I utilize that is in conjunction with Make Unique. For example, the coffee table started out as a copy of the tall table. I used Make Unique on the copy and then editing one of each of the components in the copy to change their size as needed to make the second one. I didn’t need to model any new parts for it. 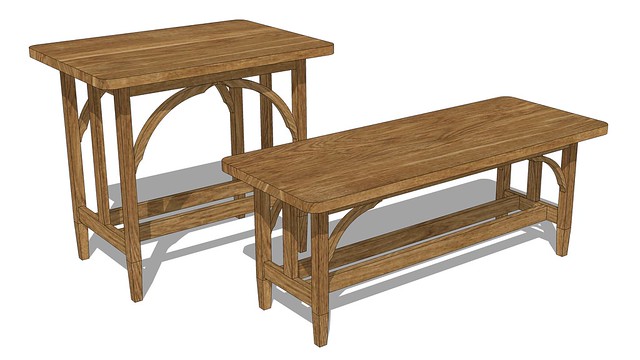 Thinking about your car tire thing, it would be possible to drag out a copy of the tire, open it for editing and draw a whole new wheel inside the component which would result in the wheels on the car being replaced without needing to move the old ones out and move the new ones in.

How old are your students?

I’ve used components to make multiple views of the same object inside SketchUp (i.e. without using Layout). It’s kind of like a reference file; edit one copy and the other’s update. Here’s an example from a class with SketchUp for Schools when it first came out:

That is a very cool animation!

Yes! So this would be the idea. I give students a file with the cabinet and a very basic hardware component. They edit the component and see the changes on the cabinet. I am just not sure how excited they would be about this model.

The last idea I thought of was a Ferris Wheel with just a rectangular prism for the seats. Students would end the prism which would be a component and then see all the seats change. I’m not sure if thats the best idea though.

Thanks for the help!

No. I wouldn’t expect high school students to be very excited about changing knobs on a cabinet. The Ferris wheel idea seems like a good one. You could have them edit one of the seat things to see it change and then maybe have them make alternating seats unique and replace one set with a different seat component.

Some years ago I modeled a wooden roller chain and sprockets for a guy who was designing an automaton. Later he wanted to add buckets to lift M&Ms. Since my chain model was made of components it was a simple matter of modeling the bucket component and then replace every other link. 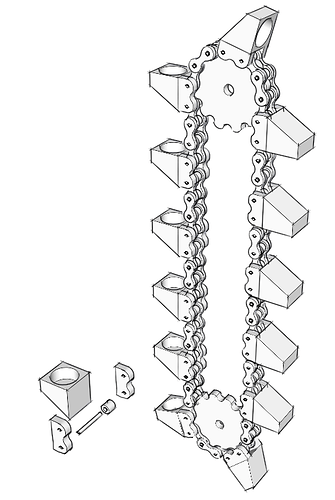 Dave, we are circling the perfect model for this activity. I really appreciate having this place to bounce ideas around.

I think it’s cool that you want to teach your students these concepts about working in SketchUp. Generally it seems this is under-utilized by many users.

For my needs at least, gluing isn’t always a good thing. Can’t place a component with gluing properties at the intersection of guidelines for example.

Had an embarrassing moment with my dad trying to do that very thing but with a sheet metal screw. It’s pretty frustrating.

Had an embarrassing moment

The gluing thing? For what I generally model omitting the gluing property works just fine and for things like screws, they are easily rotated once placed. And I usually only insert one and rotate it before copying to make the others.

to do that very thing but with a sheet metal screw

I had better have screws to spare, especially when working outside. And no one should be walking barefoot afterwards.

Yes, I’ve been through this frustration! I think what happens it this: