I add a line and some text, save the document, do some more changes,
but closes the document and chooses “Dont save”. Everything before last manual save is saved nonetheless, and is retained upon re-opening the document: 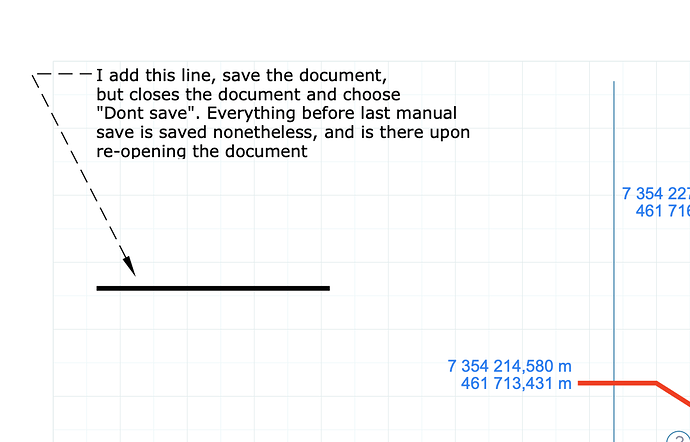 I’m not understanding your issue. You save explicitly and then expect quit without save to undo what you previously saved? That doesn’t make sense…

well maybe I fundamentally have got this wrong over the years but I would expect closing without save to revert to the state of the drawing before it was opened.

So what you are saying is you expect, open a Saved file, work on it saving regularly, then close it and choose not to save it at that point. Now when you open that file again it will be as if you have made no changes to it.
If that was the case, what is the point of saving anything while working.

However, if you open a saved file, make some changes, choose save as and save that, continue working and eventually close the file the original saved file will remain unchanged but the save as file will have the changes.

alright, I have, strangely, fundamentally got this wrong over the years… so now I know then. Never too late.

So then this is not a bug in LayOut, correct?

I think that was stated really clearly. I guess what you want is for me to press the “solution button”. I will do so.

I guess what you want is for me to press the “solution button”.

I was mostly wanting you to remove “bug” from the tags for the thread.

To be clear: “Don’t save” loses the changes you did after the latest save.