I just corrected a component that did not show solid in Entity Info but showed as a solid in Go Inspector. Inspector did not pick up that there was something wrong with an extrusion of a tenon and called it a solid. I read previous posts where this sometimes happens due to double faces that inspector does not recognize (Box pointed it out in other posts.) I edited the component, erasing the extrusion, drew the tenon under the component, moved the tenon to the component, erased the face where it joined, redrew the lines to put the single face back, and bingo; it was solid in both Entity Info and Go Inspector. Now, the work flow to prevent having to do all that should have been 1) Start by erasing the face where the tenon will be? 2) Then redraw with the tenon included.? Here is the skp with the solid component (Runner). If you go to Tags and click the eye on “Outside” folder, you will see the runners with the tenons.
Chisel Case.skp (627.6 KB)

What’s the name of the component that you are referring to?

Your description of the process sounds like more work than it needs to be but I’m not seeing a part with a tenon on it when I turn off the Outside Parts tag folder.

It is called Runner. Maybe tenon is not the right term. It’s the part that fits into the dado/groove in the bottom and top. 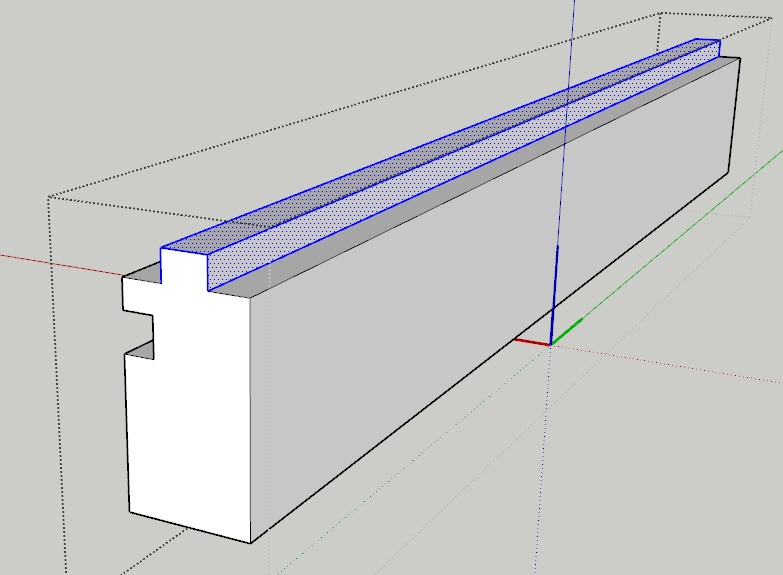 If there was doubled faces, you should be able to see them and delete one of them. If it was really challenging to find the bad geometry you might take the path of least resistance and delete all but the end face and use Push/Pull to extrude it to length again.

In the case of modeling the piece in the first place, the end profile with the tongue is simple enough to draw that I would draw it in one piece rather than doing the gymnastics you describe to get the tongue.

That’s right. I did not know from the start that I would need a tongue. When I added it later, that is when the problem occured. I could not see the hidden geometry with my old eyes, even in Monochrome. That is why I used the process I described. It would have been much less cumbersome to use the path of least resistance you describe. Thanks, because the way I always make changes, I’m sure to run into this issue again. Now, just hope “oldtimers” doesn’t keep me from remembering what to do.

@DaveR’s suggested method illustrates a principle of fixing issues in SketchUp: often it is easier and faster to start over than to laboriously attempt to find a subtle error.