Hello folks. I’m working on the design for a heavy lift drone. I wanted it to be held by a frame so the programmers for it could let it “fly around just a little” as they got their algorithms optimized, but the frame would be there to “catch” the drone if the new programming was going to crash it. The bigger drones are so expensive to fabricate it seems to me that it isn’t reasonable to just keep crashing them and ruining them as the flight control programming is being optimized. So I thought to create the “hold the drone” frame. I feel I need to use cardanic joints so the drone has a lot of degrees of freedom of motion. Here’s the drone tilting one way and the other. I have another drawing where I added the second cardanic joint with an incorporated hydraulic cylinder. The effect of this is the hydraulic cylinder can be set to free motion and the drone moves around, but if a crash becomes imminent, the hydaulic cylinder flow can be stopped and the cardanic joint will “freeze up” holding the drone and keeping it from being damaged. I have one degree of freedom controlled so far, more to come. Whew. Enjoy! Dr. Gray
I’ll use Sketchup renderings because they are so much faster. I’ll get some KeyShot renderings when I get it just the way I want. 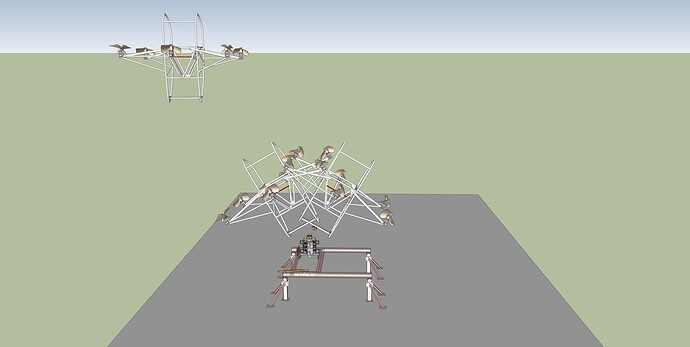 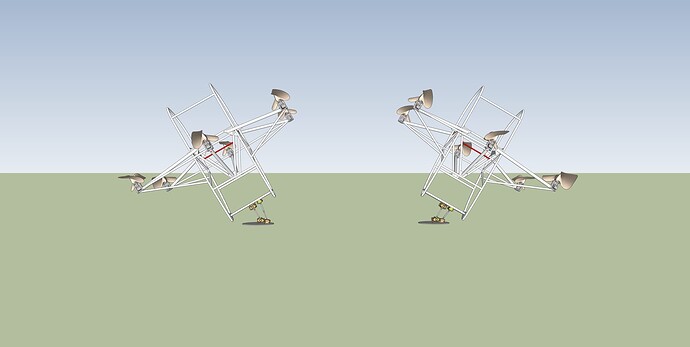