Using SketchUp free (Web) when I save a .png file, the newly created file does not get a file extension (of .png)

Does it open in your image editor?

If you change the file extension, is it still a valid PNG file?

If I rename with .png extension, the file opens okay.

That’s good. Then it’s a minor error in file naming, but the file itself is valid.

I wonder if it is related to a specific browser. Or do you even have your computer set up to display file extensions? I just downloaded a PNG in Chrome on my Win10 machine and get the extension displayed. 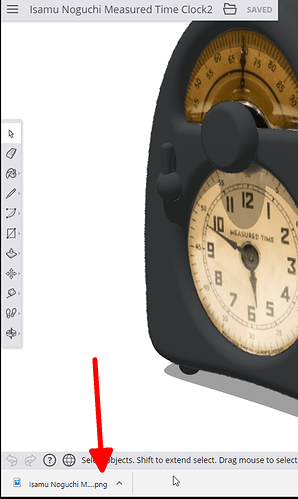 I’m using FIrefox 58.0.2 (64-bit). (Google Chrome has recently been reported as having some serious problems with hackware, so it is what it is). How do I get the support folks to acknowledge and eventually fix this bug?

Evidently SketchUp Free is generating the file extension Firefox isn’t showing it. Have talked to the Firefox support people?

This is frustrating. Let me repeat: Sketchup is not generating a .png extension when the file is saved. How do I get the bug forwarded to the proper people so that it can be fixed?

Strange, I just tested it via Firefox on OSX and it also generated the same issue (creates a png with no extension). 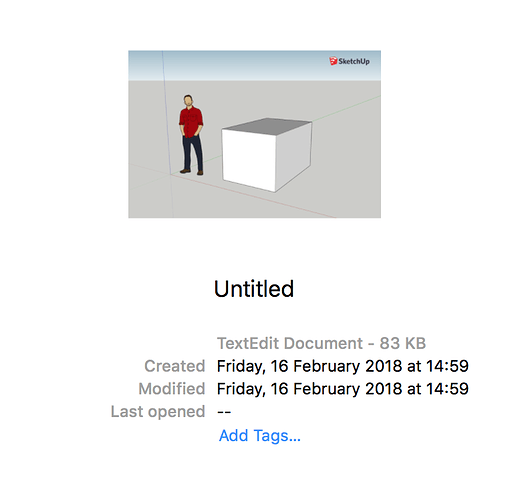 Using Chrome it does put in the extension name: 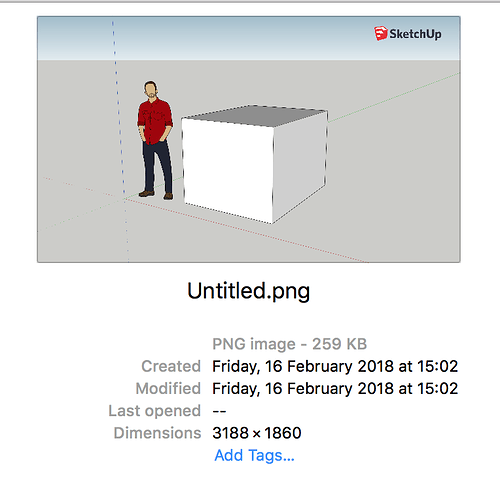 I am unsure if this is a Trimble or Mozilla issue? Maybe one of the team will know more @SketchUp_Moderator ?

However I am not aware of any bugs in chrome, as long as it’s patched and up to date, I would suggest just using another browser for now.

Sketchup is not generating a .png extension when the file is saved. How do I get the bug forwarded to the proper people so that it can be fixed?

Thanks for reporting this bug- our team will take a look at it to see if there is a way we can fix the root cause.

I can confirm that Firefox 58.0.2 on macOS does not add the *.png extension to exported images. It does generate a valid image, it just saves it to your local disk without an extension.

Chrome does not exhibit this error, so if you need a workaround in the meantime I suggest you consider using it instead.

(Google Chrome has recently been reported as having some serious problems with hackware, so it is what it is)

I’m not familiar with any current security advisories against using Chrome. I know that development team (some of them personally) and I know they take your security very seriously.

I don’t normally use Chrome, so I built a single site browser just for SketchUp Free…

I am unsure if this is a Trimble or Mozilla issue? … @SketchUp_Moderator ?

There are ways to get Firefox to display file type extensions. The following links were found:

Cheers, I am using chrome so no issue for me.

That’s not the problem. Forums often lose the original idea. Sketchup does not save a png file with a .png extension. It’s a bug. I want to know how to pass the bug report to someone who actually can fix it, but people are full of ideas and theories that don’t answer the question.
Regards

SketchUp does save the file as a .png, but firefox leaves off the extension, it’s still technically a .png file.

Edit: I think one of those links above allows you to re-add the missing extension in browser.

Did you read through the information I sent you? This situation has been known about Mozilla for some time now and apparently is not deemed a “bug”. You have the option to display or not display extensions of files downloaded with that browser. Whether or not you choose to has no impact on file operation.

Technically, at least at the time I used Macs, there is no such thing as a file extension on a Mac, it is just a convention to mimic Windows filenames by adding a dot plus characters at the end of a file name. The real tag that determines the file type and the application to use when opening it is hidden from the user and can be seen only with a resource editor. On a Mac you can go on and add .jpg at the end of the name of a TIFF file, and it changes nothing.

Thanks Jonh. Obviously this is not a show-stopper bug but even more obviously, this code was designed and maintained by an extremely compentent team, so I’m assuming that you’re looking for any bugs that make the software imperfect. It is a very satisfying program to run, and it puts many other 3D CAD programs to shame.

As far as Chrome, here is a link to the latest report of a serious problem: 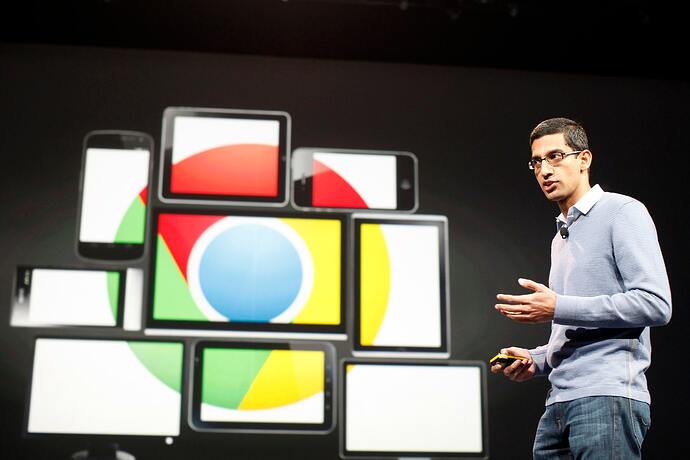 Scams that hijack the world's most popular browser, Google Chrome, are making the rounds again.

To be fair that’s just scammer tactics rather than a fatal bug inside chrome, it just so happens the Scammers are targeting Chrome users specifically in this case, freezing the active window and sending a message to call them for support: Tech-support scammers have a new trick to send Chrome users into a panic | Ars Technica

You are able to simply close the Chrome window and start a new session for it to go away.

From the article on Ars Technica, there is a similar exploit on Firefox, however unlike Chrome that asks you to call a number, the Firefox version supplies an entry form to enter your User/Pass combo: 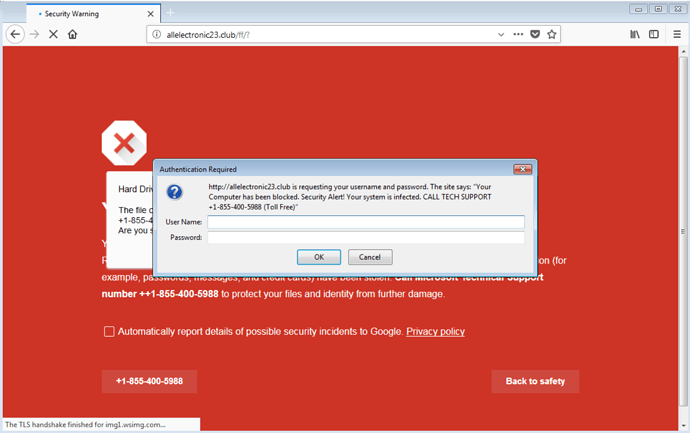 1854×1164 308 KB
They report this exploit is present on other browsers such as Edge. So in this case I would not let this issue stop you from using Chrome, as long as you don’t call them up you will be fine. With the same issue in Firefox, as long as you don’t enter in any details, you can simply close and re-open the browser.

Also just checking and it looks like they have fixed this issue in Chrome as of Feb 15th: